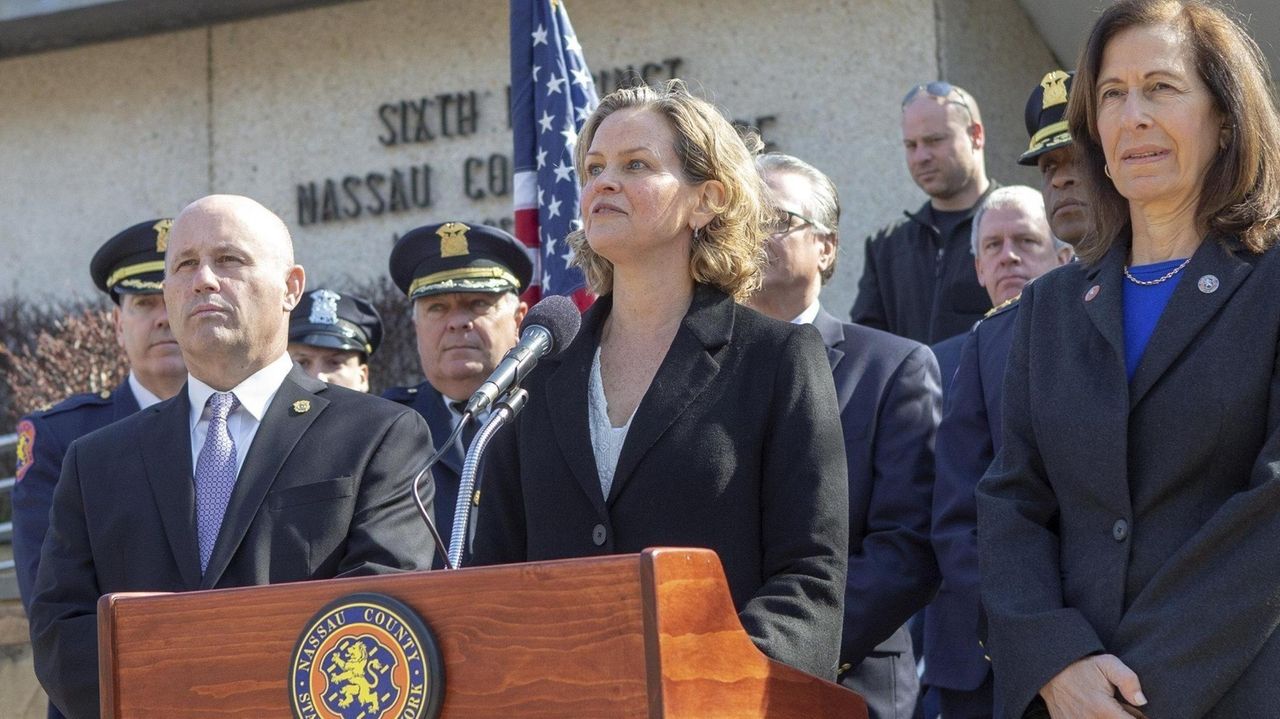 Two Nassau County police precincts — in Manhasset and Levittown — will reopen next week with law enforcement staff in a $2.2 million deal between the county executive and legislators. Elected officials on Thursday morning announced the expected reopening and renovation of the Sixth Precinct on Community Drive in Manhasset. Credit: Howard Schnapp

Two Nassau County police precincts — in Manhasset and Levittown — will reopen next week with law enforcement staff in a $2.2 million deal between County Executive Laura Curran and legislators.

Curran, Police Commissioner Patrick Ryder and Legis. Ellen Birnbaum (D-Great Neck) on Thursday announced that the Sixth Precinct in Manhasset is expected to reopen on Tuesday and the building on Community Drive will be renovated.

Also, the Eighth, in Levittown on North Wantagh Avenue, reopens on Wednesday.

“Community policing really is part of Nassau’s DNA. We do it better here than anywhere else, thanks to the hard work, dedication and commitment of the men and women in our police department,” Curran said.

The county’s Sixth and Eighth precincts were closed under a 2012 consolidation plan aimed at saving money. They were converted into community policing centers that lacked the full staff of officers and upper-level police supervisors of a precinct.

The precincts initially will not have detective squads, Ryder said, because of a shortage of county detectives.

The hiring of new detectives is subject to collective bargaining negotiations that are under way, Ryder said.

“For the past two years we have voiced our concerns about public safety issues to the county executive and nothing has been done,” Wighaus said. “We are becoming more reactive in our special squads than proactive due to manpower issues.”

Curran, a Democrat who took office January 2018, supported the reopening of the precincts during her 2017 campaign.

But in October, she came out against restoring them, citing budget constraints and a lack of detectives to staff them.

A month later, in a compromise with county legislators, Curran agreed to use money from the 2018 police budget to reopen the precincts.

Birnbaum, who long has pressed for the reopening and renovation of the Manhasset precinct, said: “This was a fight that was worth fighting for.”

Reopening the Sixth Precinct, Birnbaum added, shows the county is “embracing a community-centered approach to law enforcement that adheres to contemporary best practices and serves our constituents and officers in the manner they deserve.”

Renovations to the building, opened in 1972, will cost $860,000, and the work is expected to be completed by October, officials said. In the meantime, the precinct will be located in a modular building on the property.

Legis. John Ferretti (R-Levittown), who was not at the announcement, said Thursday he was “relieved” by Curran’s decision to reopen the full precincts. Ferretti had fought to reopen the Eighth. “However, I am still concerned about her continuous flip-flopping on this,” he said.