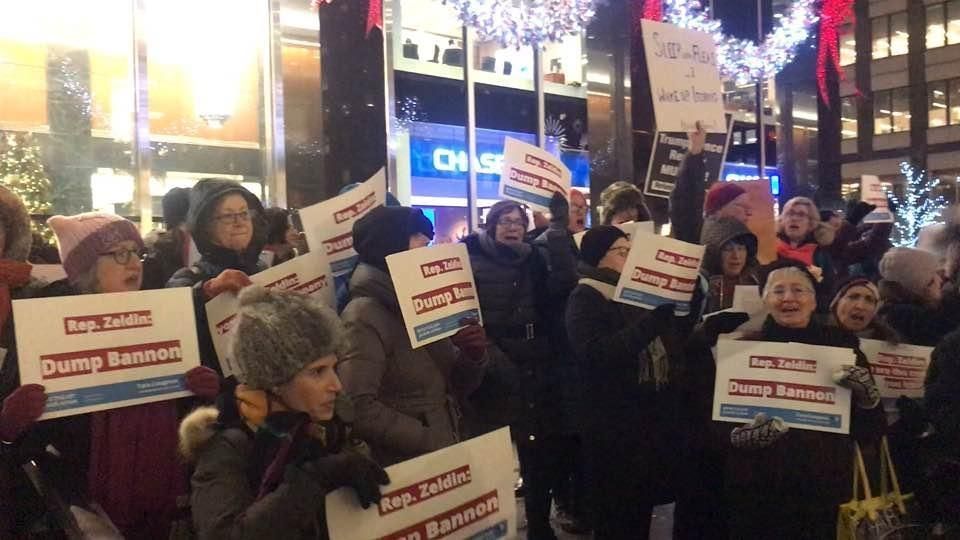 The protesters accused Bannon of being anti-Semitic, a supporter of bigotry against nonwhites and immigrants, and condoning events like the August white nationalist march in Charlottesville, Virginia, that left a counterprotester dead — accusations Bannon denies.

For his part, Zeldin and Bannon have bonded over the men’s fierce support for Israel.

Thursday’s picketers were suspicious of the men’s alliance and politics.

With Bannon due to address Zeldin supporters paying at least $500 per ticket, Hartmann joined about three dozen chanting opponents who held signs outside a Park Avenue high-rise. Among the messages written on the signs were: “ZELDIN IS A BAD JEW,” “AS A JEW, I REJECT YOU” and “SHANDA,” Yiddish for shame or disgrace.

Hartmann said she disagrees with Zeldin on Trump’s travel ban on visitors from certain Muslim-majority countries, attempted repeal of Obamacare and support for the current Israeli government, all of which Zeldin backs.

Zeldin and his district, covering most of Suffolk, have been singled out by national Democrats as a “battleground” to help them reclaim a majority in Congress from Republicans.

Neither Zeldin’s office nor the fundraiser’s hosts would disclose the venue, and neither Bannon nor Zeldin crossed paths with the picketers. Fundraiser Arthur Schwartz said the decision to disclose the location rested with Bannon’s security team.

But the opponents guessed the location to be the Midtown office building where one of the organizers is a tenant.

To Jan Uhrbach, 54, the rabbi of the Conservative Synagogue of the Hamptons in Bridgehampton — the house of worship’s name references a denomination of Judaism, not a political leaning — the story of the Jewish festival of lights is an allegory.

“As Jews around the world lit the first candle of Hanukkah, our ancient symbol of hope, truth and morality, to dispel the darkness of fear, intolerance and hated, that very same night, a bright light was lit in Alabama,” she said. “Tonight, having failed to get Roy Moore elected in Alabama, Steve Bannon is here in New York to raise money for Lee Zeldin.”

Nearly 8 in 10 American Jews disapprove of Trump’s performance, more than 20 percentage points higher than the national average, according to New York’s Jewish Week newspaper. But among Orthodox Jews, 71 percent approve.

Bannon, who resigned in August as Trump’s principal political strategist, is a populist conservative credited with helping catapult Trump to the presidency.

Bannon backed Moore, an evangelical populist who was accused by multiple women of molesting and pursuing them sexually decades ago, when they were in their teens and Moore was in his 30s.

Democratic Congressional Campaign Committee spokesman Evan Lukaske said in a news release Thursday: “Next year, Zeldin will have to explain to voters why he’s partnering with a man who supported an alleged child molester.”

Reached by phone, Rep. Peter King (R-Seaford) said Thursday that he thinks the influence of Bannon has waned after Moore’s loss.

Of Zeldin’s fundraiser, King said, “I don’t like Bannon, but a person has to do what they feel is best. Lee, I guess, knows him better than I do.”