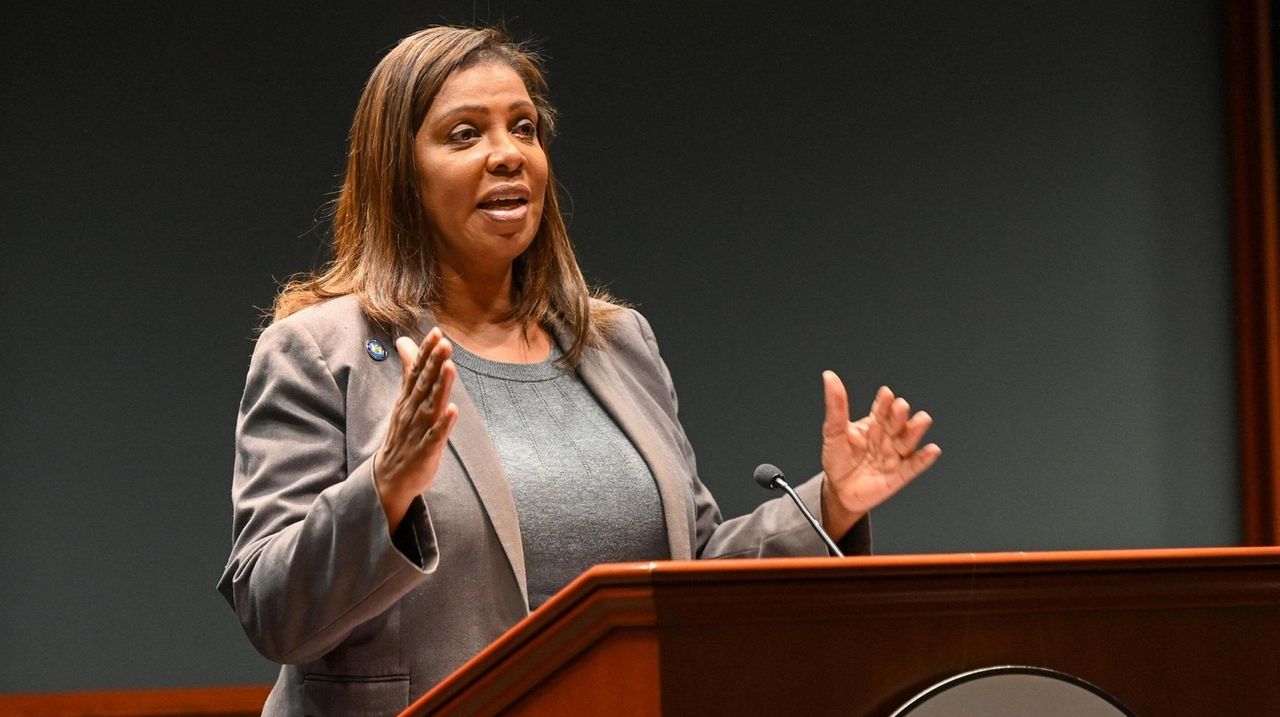 Attorney General Letita James on Tuesday pushed back against critics who have framed her sexual harassment investigation as a political takedown of former Gov. Andrew M. Cuomo.

"I'm sure many of you have seen I've been criticized regarding the report that I issued into Governor Cuomo. But it's important that everyone understand the facts. The investigation was referred to me by Governor Cuomo," she told about 70 attendees of a lunch event hosted in Melville by the Long Island Association, a business group.

James, 63, of Brooklyn who announced two weeks ago she would be seeking the Democratic nomination for governor, recalled the conversation with Cuomo when he referred the case to her office.

"He said: 'Tish investigate these allegations of sexual harassment.' He said, 'I believe in you. You've done a good job. Let Tish investigate,'" James said. "I did. Unfortunate that he didn't agree with the outcome."

Rich Azzopardi, a spokesman for Cuomo, who resigned in August imbroiled in scandal and possible impeachment, said: "From the beginning we said James was conflicted because she refused to rule out a run for Governor, and it was only after being extorted by legislative leaders threatening impeachment that we agreed to refer this to her on the condition that she appoint outside independent investigators.

"Instead, she chose biased investigators, now admits she was directly involved in this probe, is running for Governor and has refused to answer a single substantive question about her investigation," the spokesman said.

In her 25-minute speech to the LIA, James also talked about the need to address business regulations, strip some powers from the executive branch of state government and "let everyone know New York is open for business."

"Government has an important role in regulating business — and I will never back down on that — but we need rules and regulations that are fair. That are clear. That are predictable," James said.

While not billed as a campaign event, James' speech updated the business community on her office's accomplishments while laying out political priorities.

"The Long Island Association frequently hosts elected officials to address the business community. New York State Attorney General Tish James has spoken to the LIA before and today she updated us on her work as AG, including how her office supported Long Islanders during the pandemic."

She also spoke about some of the investigations of her office and how she said they have benefited Long Islanders, including holding those accountable for illegal dumping in Brentwood and securing hundreds of millions of dollars for Nassau and Suffolk counties after winning a settlement from opioid manufacturers.

She said her vision of "how government should work" includes a partnership between government and business.

"Our state faces so many challenges: Inflation; prices at the gas pump; COVID recovery; climate chang; getting our economy moving; supporting our businesses an reinforcing that this is a government that is business-friendly," James said. "But New Yorkers haven't had the full powers of government needed to meet these challenges."

James said the scores of state agencies that have been created over the years need to be reviewed "and that means changing how the state's executive branch is run."

"Total power, my friends, and decision-making cannot — cannot — be solely in the hands of the executive," James said, citing as an example how state Health Department officials were prohibited to coordinate response with county and city officials, as found in her office's investigation of nursing home COVID deaths.

She said the state needs to adopt a new culture in which "we leave policy to the professionals" and "we give them autonomy to perform."