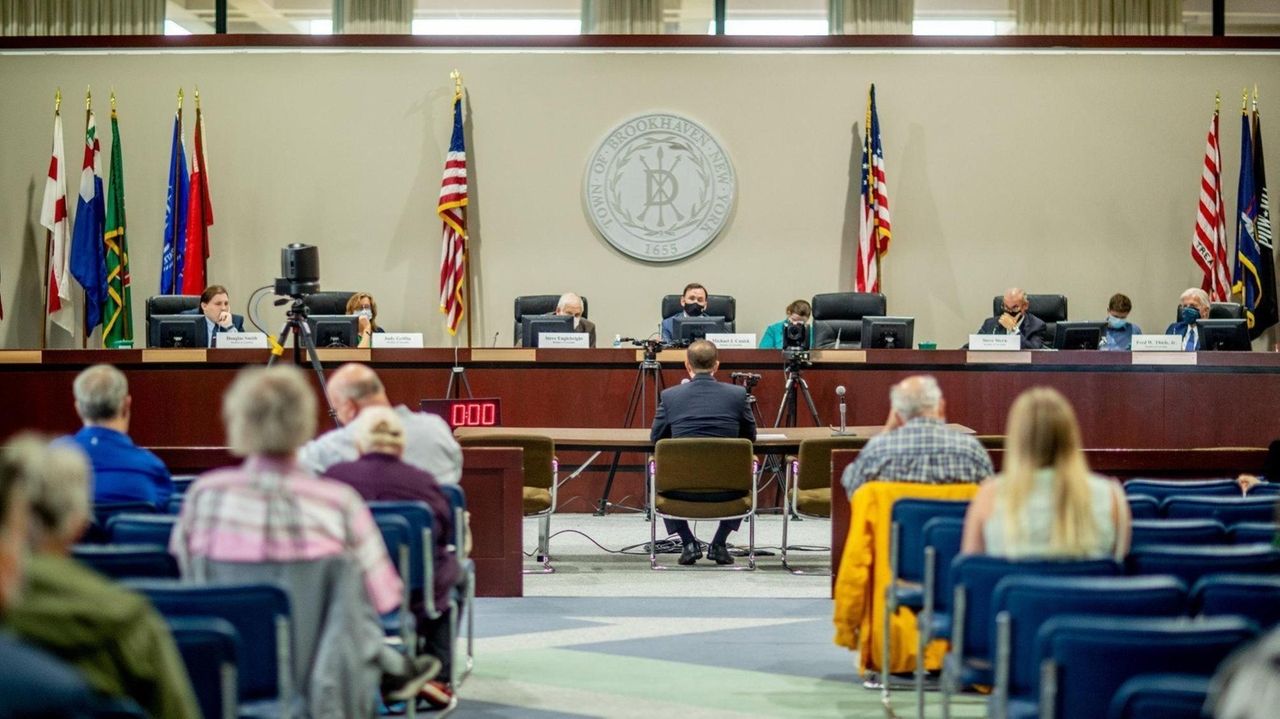 The State Assembly's energy committee held a hearing at Brookhaven Town Hall in Farmingville on Monday to explore the reasons for LIPA's unexpected decision to renew its contract with PSEG Long Island. Credit: Newsday / Raychel Brightman

The comments at a state Assembly energy committee hearing in Brookhaven came as a bipartisan group of state and local lawmakers expressed interest in shifting the Long Island Power Authority back on course toward becoming a fully public utility.

LIPA has said the public option would save ratepayers more than $80 million a year.

During the hearing, Assemb. Steve Englebright (D-Setauket), a public-power supporter, asked LIPA chief executive Tom Falcone, "Were you told what to do by the governor?" in pursuit of a contract with PSEG.

Falcone testified that Cuomo recently had read an account in Newsday about a LIPA board meeting in which a top PSEG official told LIPA the company would continue to fight to keep its $80 million a year contract, despite LIPA’s continued issues with PSEG’s performance.

Falcone said PSEG "decided they wanted to be in. And it went from a negotiation that for six months went nowhere to one where suddenly they gave us everything we wanted."

PSEG agreed to a contract terms that essentially put half its $80 million a year fee at risk of loss if it failed to meet new performance metrics.

The agreement also would settle LIPA’s breach of contract suit against PSEG with $30 million in givebacks, commit PSEG to a beefed up company management staff and new levels of accountability, and gives LIPA the ability to terminate the contract in 2025.

Cuomo spokeswoman Haley Viccaro acknowledged the governor had "told LIPA and PSEG LI to either reach an agreement or sever ties."

She continued: "Nothing in this stronger renegotiated agreement precludes further exploration and pursuit of a municipal model, which would need to be authorized by legislation."

A PSEG spokeswoman declined to address Falcone’s comments directly, but pointed to testimony at the hearing by Chris Hahn, PSEG’s director of external affairs.

Hahn said LIPA leadership "should be commended" for moving ahead with PSEG.

"I believe its leadership recognized that dismantling the LIPA-PSEG relationship following our telecommunications issues during [Tropical Storm] Isaias would mean that hard lessons learned would have to be relearned by someone else during the next storm," Hahn testified.

At the hearing Tuesday, lawmakers condemned the public-private model that keeps PSEG Long Island running the system, and criticized PSEG for its performance failures during Isaiah and other storms.

Assemb. Fred Thiele (I-Sag Harbor) said the utility was in the same spot it was after enactment of the LIPA Reform Act of 2013, Cuomo’s legislation that gave PSEG an expanded role in running the LIPA system.

Falcone defended the new contract with PSEG. But he noted it still hasn’t been finalized and voted on by the LIPA board, and it won’t be in full effect until January.

Falcone agreed to make the agreement available publicly 30 days before the board vote, and stressed the contract would give the authority numerous options for terminating the PSEG contract.

"If the [state] legislature passes a bill that says we should municipalize management we have a right to terminate," Falcone said, noting LIPA would "have to pay a termination fee in that case."

Assemb. Doug Smith (R-Holbrook), took it a step further, calling for LIPA to be "abolished as it currently exists," and for PSEG to be "unplugged," in favor of public power.

Hahn said there would be future storms and some customers would lose power but said PSEG had "acquired the street knowledge to make it an even more effective partner in protecting Long Island’s energy grid."

1:08
Marchers in Wyandanch: 'Drop the guns, save our sons'
Hochul: Slight decline in number of coronavirus hospitalizations
2:10
Police in Wyoming, Florida conduct separate searches for Gabrielle Petito, 'person of interest' fiance
If you see it, kill it: Why this pretty bug has experts sounding alarms
2:29
Workforce, middle-class homebuyers shut out on Shelter Island
Blue Point native Gabrielle Petito 'loved that van life.' Now she's missing.
Didn’t find what you were looking for?