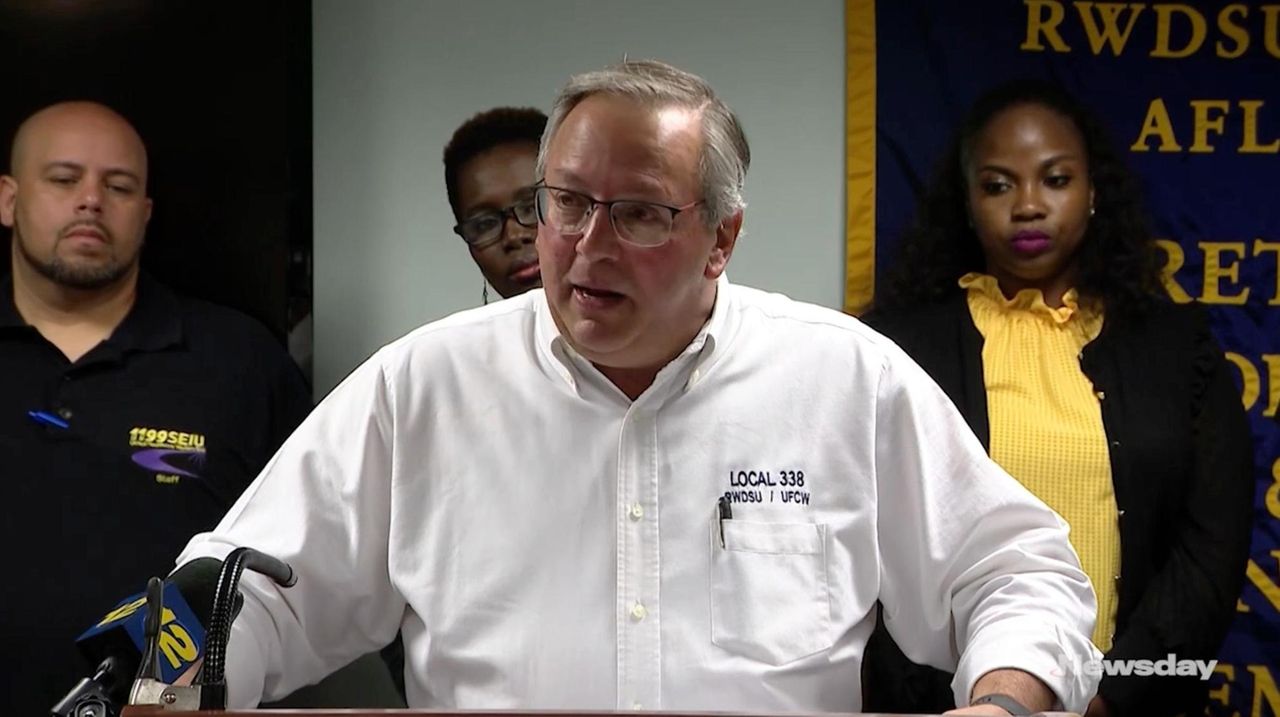 Local labor leaders and politicians gathered in Mineola to support a bill legalizing recreational marijuana. The group wants state lawmakers from LI to help pass the legislation by the June 19 deadline.  Credit: News 12

The Marijuana Regulation and Taxation Act, which creates a legal framework to grow and sell cannabis, has the support of Gov. Andrew M. Cuomo and progressive Democrats in the Senate and Assembly.

But prospects for passage of the bill — which also creates a fund for communities of color that have been disproportionately affected by marijuana arrests — have dimmed, in part, due to a lack of support from all of Long Island’s six Democratic state senators. State Democratic Party chairman Jay Jacobs said Long Island lawmakers could be voted out of office next year if they support controversial progressive issues such as legalization and driver’s licenses for undocumented immigrants.

At a news conference Monday in Mineola, advocates pushed for a “miracle” in the session’s winding days, arguing that legalization would both hypercharge the economy while providing social justice reform to African American and Latino communities.

“We would be hiding our heads in the sand by not addressing this issue,” said Durso, who also runs the Long Island Federation of Labor. “It’s not going away. Generations of people have suffered from the laws and a lack of access to the wonders of cannabis.”

Assemb. Taylor Raynor (D-Hempstead) said communities of color have been torn apart by marijuana laws, preventing those who are convicted of possessing even small amounts from securing loans, obtaining housing or employment.

“We gain nothing by pretending that marijuana is not used by adults of all backgrounds,” said Raynor. “When we finally decide to deal in reality we can regulate the product and its ability to ensure quality; a safer supply chain and limit access to people under 21.”

Nassau County Executive Laura Curran and Suffolk County Executive Steve Bellone, both Democrats, have said they will pursue an opt-out legislation if the state legalizes recreational marijuana. Suffolk’s opt-out has a sunset provision that would make marijuana legal after a year, unless the county legislature votes to continue the ban.

An amended version of the Marijuana Regulation and Taxation Act, sponsored by Sen. Liz Krueger (D-Manhattan), would give the opt out decision to cities, towns and villages rather than the counties as a whole.

Advocates argued Monday that marijuana legalization is needed to address a “social injustice” where blacks and Latinos are four times more likely to be arrested for pot possession than whites. Supporters want a process to expunge the criminal records of those convicted in low-level marijuana possession cases.

Brendan Davison, owner of Good Water Farms in East Hampton, which grows organic microgreens and now has a hemp license, plans to enter the recreational marijuana market if the state legalizes the drug.

He called cannabis a “remarkable plant. It’s for the people and by the people that can heal the people.”