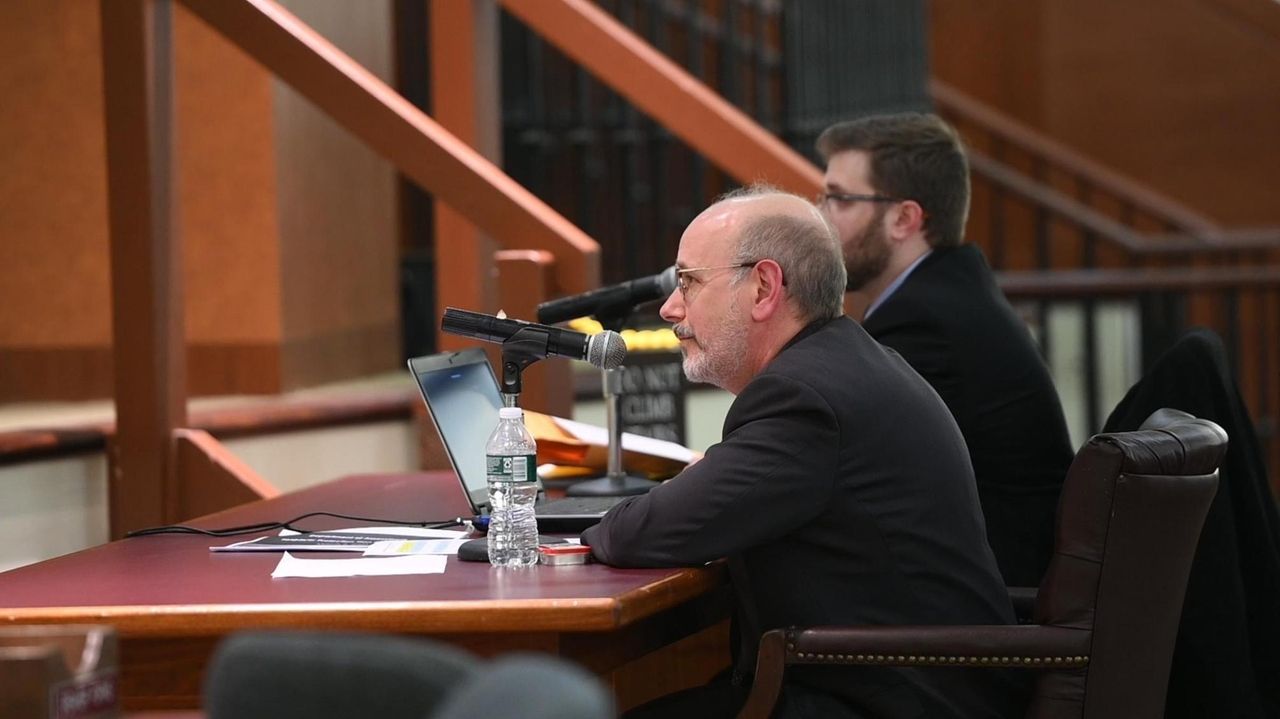 Newsday's Scott Eidler speaks about the Republican-held hearing on the proposed law; which is taking place nearly a year after being first proposed as a measure to prevent sudden increases and decreases in tax bills.  Credit: Howard Simmons

The Nassau County assessor said Wednesday it would be difficult to ensure accurate tax bills unless Republican lawmakers immediately approve of key legislation phasing in over five years the effects of the first overhaul of county property values in nearly a decade.

County Assessor David Moog said, "Getting this passed by April is imperative in order for us to have the time to make sure, because you never want to put out tax bills to the [town tax] receiver that are wrong. You can't pull them back, and that becomes very crucial."

He added, "Implementing the phase-in plan effectively and accurately for 380,000 individual parcels as well as producing tax warrants on time is an enormous and complex process that will take months to complete and properly vet."

Majority Republicans finally held a legislative hearing on the proposed law Wednesday night, nearly a year after Nassau County Executive Laura Curran first proposed it as a measure to prevent sudden increases and decreases in tax bills. The State Legislature authorized the program last March, but Nassau must enact a separate local law for the phase-in to take effect.

Curran, a Democrat, along with Democrats in the minority on the county legislature, said GOP legislators have stalled the bill for political reasons and must act soon.

But Republicans said they have been performing their due diligence, and want assurances the reassessment was conducted accurately and fairly before agreeing to a phase-in.

Chris Boyle, a spokesman for the majority, said Wednesday night, “The Majority looks forward to analyzing what we heard from Assessor Moog and members of the community. The legislation will be called with plenty of time to be implemented should it pass.“

Legis. Steve Rhoads (R-Bellmore) noted that the phase-in is unfair to homeowners who have been overassessed in the past.

Nassau projections: More than 205,000 homes to get tax hikes

While tax hikes are delayed for property owners due increases, homeowners expecting reductions will have to wait five years to be taxed for their correct share of the tax burden.

Moog said at the hearing, which had more than 30 people in legislative chambers in Mineola: "Without passing the plan, half of Nassau’s homeowners will see an immediate and full increase in taxes. This is a fact." Those due reductions would have to wait even longer if the reassessment did not take place, he said.

Moog continued, "This is the only option to protect our residents. There is no massive bailout coming from New York State that can fix this overnight and allow for property owners to get their full tax decrease immediately."

Moog stressed at the hearing that his staff needs several months to finalize each resident's assessment -- a complicated and tedious process -- so that tax bills can be delivered accurately and on time.

To calculate the assessment and apply the phase-in, which works as an exemption, staff needs to start writing thousands of lines of code to put into an "antiquated" computer system, he said. Data from more than 380,000 properties and more than 330,000 exemptions need to be applied to the properties, tested, and vetted for a period of eight weeks.

Once school tax levies are delivered to the county in June, assessment department staff members need eight weeks to incorporate the levies into the tax warrants. Moog said staff have only August to make sure the exemptions and school taxes are applied accurately, a month when employees often take vacations. He also said there should be concern about an "emerging coronavirus outbreak."

Presiding Officer Richard Nicolello (R-New Hyde Park) said at the hearing that he was concerned that the county had changed its projections about the impact of reassessment.

On Tuesday, county officials released data that show tax bills for more than 205,000 homeowners — about 53% — are projected to rise in October and January under the phase-in plan.

But last April, the Curran administration said if the phase-in were approved, 55% of Nassau homeowners were likely to see a decrease in property taxes under reassessment.

See how Nassau's reassessment plan would impact property taxesTax bills for more than 205,000 properties are projected to rise under Laura Curran's plan, according to new county projections. Nassau projections: More than 205,000 homes to get tax hikesAnother 177,000 property owners are expected to get tax reductions for the 2020-21 tax year, officials said in a report to the county Legislature.