Nassau County Executive Edward Mangano, seen here on May 11, 2017, is officially a lame duck after failing to file nominating petitions to run for re-election on an independent ballot line. Credit: Howard Schnapp

Nassau County Executive Edward Mangano is officially a lame duck after failing to file nominating petitions to run for re-election on an independent ballot line.

Mangano, a Republican who is fighting federal corruption charges, missed Tuesday’s deadline to submit at least 1,500 signatures to qualify as a new or unestablished minor party candidate in the general election, according to the county Board of Elections.

The inaction was widely expected after Mangano had already failed to file any petitions to force a Republican primary next month against the GOP’s choice for county executive — former state Sen. Jack Martins — or claim the Independence Party line in November.

Before his indictment last fall, Mangano had appeared in good position to win a third term, having amassed nearly $2 million in campaign funds.

Now, he will leave office at the end of December, without the say of voters.

Mangano has pleaded not guilty to federal charges of receiving bribes and kickbacks from indicted restaurateur Harendra Singh in return for county work. His trial is scheduled to begin in early January.

A spokesman for Mangano did not respond Wednesday to requests for comment. Mangano has never publicly acknowledged that he is not running for re-election. But he has raised no money since January, campaign finance records show, and some of his top staff have departed.

As recently as last month, Mangano’s campaign was paying a political pollster and he told reporters who had asked about his failure to claim the Republican or Independence lines: “There’s other ways to run if you wanted to, but I can’t get into that now.”

As a little-known county legislator from Bethpage, Mangano was considered a long shot candidate to unseat two-term Democratic County Executive Thomas Suozzi in 2009.

But riding a wave of anti-tax sentiment, Mangano beat Suozzi — who had run recently for governor and sat on much of his campaign war chest — by fewer than 400 votes.

Less than halfway through his second term, Mangano began to be dogged by questions about his longtime friendship with Singh. By late 2015, with the federal investigation active, Mangano was using his campaign account to pay a criminal defense lawyer.

Mangano was still actively fundraising for a third term when he was arrested last October. His campaign that morning had sent out a pre-scheduled invitation for a breakfast fundraiser.

Mangano declared his innocence and brushed aside calls to resign, including from Martins, who was seeking a seat in Congress.

Mangano showed signs he was interested in running for re-election well into the spring, when the Nassau Republican Committee formally backed Martins for his job.

Martins is the only Republican running to succeed Mangano. Democrats Laura Curran, a county legislator from Baldwin, and George Maragos, the county comptroller who left the GOP last fall, will face off in a Sept. 12 primary.

As the others campaign to take his job, the remainder of Mangano’s term will feature preparing the 2018 budget under the eye of the county’s fiscal oversight board, which has projected that Nassau will end 2017 with a deficit of more than $50 million. 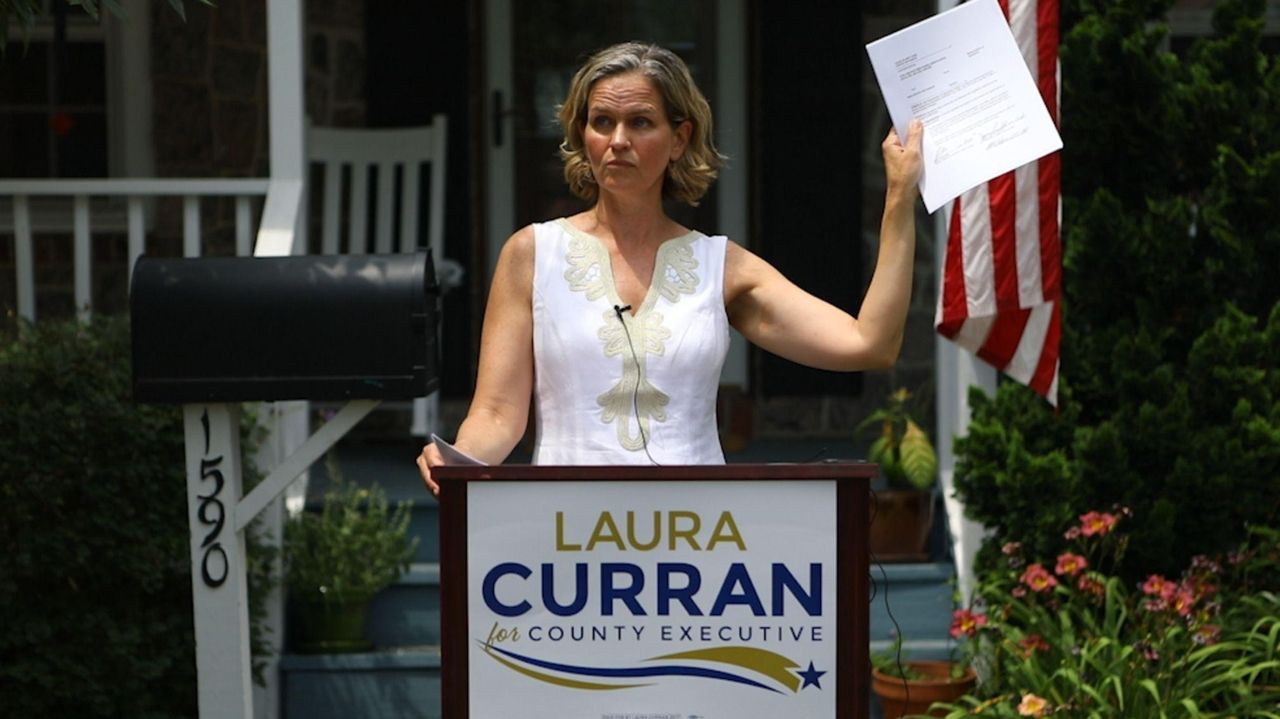 Mangano is also trying to advance an ambitious proposal to repurpose a century-old aqueduct to divert treated wastewater from a sewage treatment plant in Bay Park to another facility in Wantagh, where it will be released into the ocean.

The county recently completed a study of the proposal and is reviewing bids for the work, which is expected to cost $360 million.

The Race to be the Next County Executive

Jack Martins, a former state senator from Old Westbury, is the GOP nominee and will not face a primary

A Sept. 12 primary will be held between Laura Curran, a county legislator from Baldwin who is backed by the county Democratic Party, and George Maragos, the county comptroller who left the Republican Party last fall.

Richard Rosenberg, a former Newsday editor, dies at 65
1:45
For trying to murder Nassau cops, 25 years to life in prison
2:28
Winter storm watch in effect, more than a foot of snow possible out East
Medical experts: Indoor COVID-19 mask mandate should be extended
Mourners crowd into St. Patrick's Cathedral for slain NYPD Officer Jason Rivera's wake
Winter storm tips to survive the snow on Long Island
Didn’t find what you were looking for?