Nassau County Inspector General Jodi Franzese has questioned the "business integrity" of the company that won an $85.6 million construction contract for the new Family and Matrimonial Court building in Mineola because it failed to identify key officials or disclose campaign contributions they made.

In a new report, Franzese said E & A Restoration Inc., of Syosset, failed to disclose the identities of the top company officials when it bid on the contract.

The E & A officials — Antonios Vournou and his sister Jenny Sakalis — were "de facto officers/principals," of the company, the report said.

Their mother, Kalliopi Vournou, was listed in county filings as the sole owner of the business.

Franzese also said that Antonios Vournou failed to list himself as a principal when E & A won a $43 million contract in 2018 to build a new county police academy in Garden City.

"They do the work," Franzese said of the siblings. 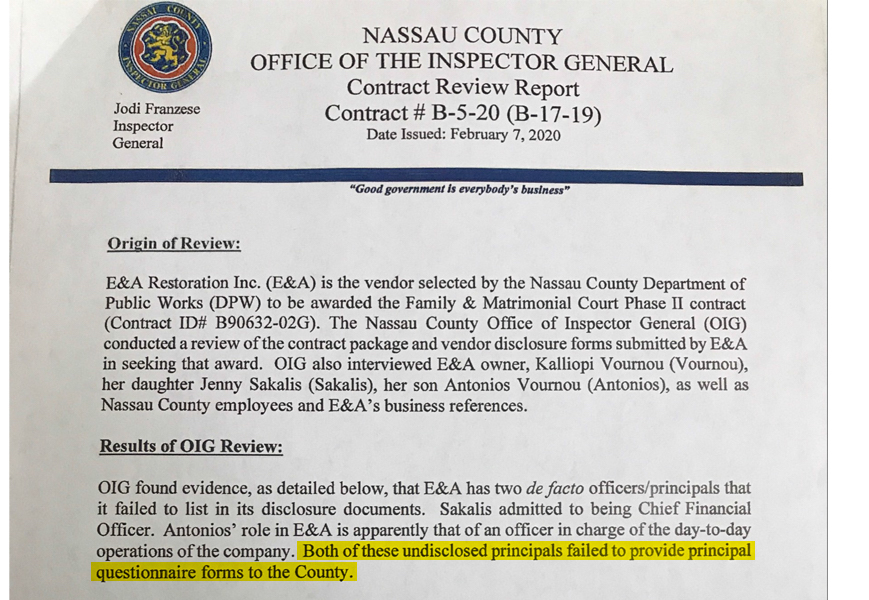 "Both of these undisclosed principals failed to provide principal questionnaire forms to the County."

As principals, both would have had to disclose campaign contributions to candidates for county office made within two years of their bids on county contracts, the report said.

If Antonios Vournou had been listed as an officer, his donations to Martins and Mangano "should have been disclosed," the report said.

Franzese also questioned whether E & A should have qualified as a woman-owned business enterprise, given concerns about whether Kalliopi Vournou was running the company.

"In its totality, the information identified in this report, in OIG's view, calls into question whether the vendor possesses the requisite business integrity to be deemed a 'responsible' vendor eligible for contract award," the report said.

E & A representatives said there was no need to list anyone other than Kalliopi Vournou, as she is the only company officer with a formal title and guarantees the company's bonds.

The company also said it didn't need to disclose Kalliopi Vournou's children as principals because they did not appear as officers on the company's tax returns.

"The company is owned by Kalliopi Vournou, who is the sole shareholder and officer listed on the company’s tax returns, and is a guarantor on the company’s performance bond," attorney Charles Capetanakis said in a statement.

However, "the children are not officers, nor do they guarantee the company’s performance bonds," Capetanakis said. "Thus, Ms. Vournou’s children did not have formal titles that warranted reporting on the forms."

E & A has "fully complied" with Franzese's investigation, Capetanakis said. 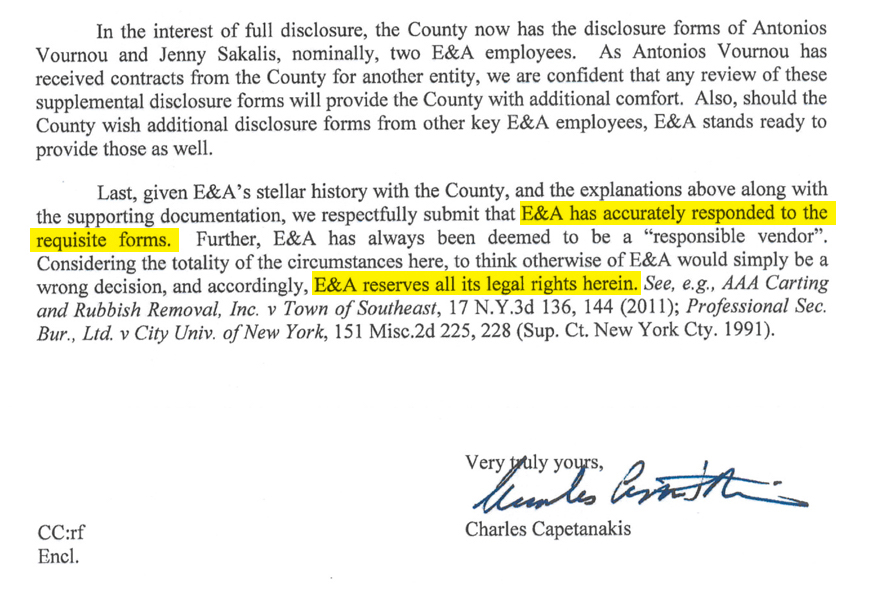 "E&A has accurately responded to the requisite forms ... E&A reserves all its legal rights herein."

Approval of the E & A contract would allow Nassau to complete its $214.6 million Family and Matrimonial Court project, which has been delayed by design changes and conflicts with other vendors.

Work on the courthouse began in 2014, and the project is over budget by nearly $47 million.

Nassau is renovating an existing building, formerly the headquarters of the county Social Services Department, for the courthouse. The structure is gutted, and a new facade is in place. E & A would build out the interior of the building.

After Franzese filed her report, a legislative committee voted to table E & A's contract until Monday to consider installing a monitor to oversee E & A's handling of the project.

The report also said that all company principals were required to complete questionnaires about outside business interests.

Franzese's report said Kalliopi Vournou responded "no" on a questionnaire about whether she had been a "principal officer or owner" of any other business or nonprofit, "other than the one submitting this questionnaire."

However, Vournou's attorney provided the inspector general with a list of 16 other business interests, the report said.

Her lawyer told OIG that "she had previously listed real estate entities in prior submissions but was later directed by (unspecified) county officials (and then counsel) to remove the information because it was irrelevant," according to Franzese's report.

Vournou and the lawyer were "unable to provide … proof of this," the report said.

The report also said that Antonios Vournou did not disclose that he was president and owner of AVCM, a Nassau County vendor.

Franzese said Kalliopi Vournou, in an interview with investigators, "gave OIG the impression that she does not handle the day-to-day operations of E & A, and that the company is being run by Sakalis and Antonios." 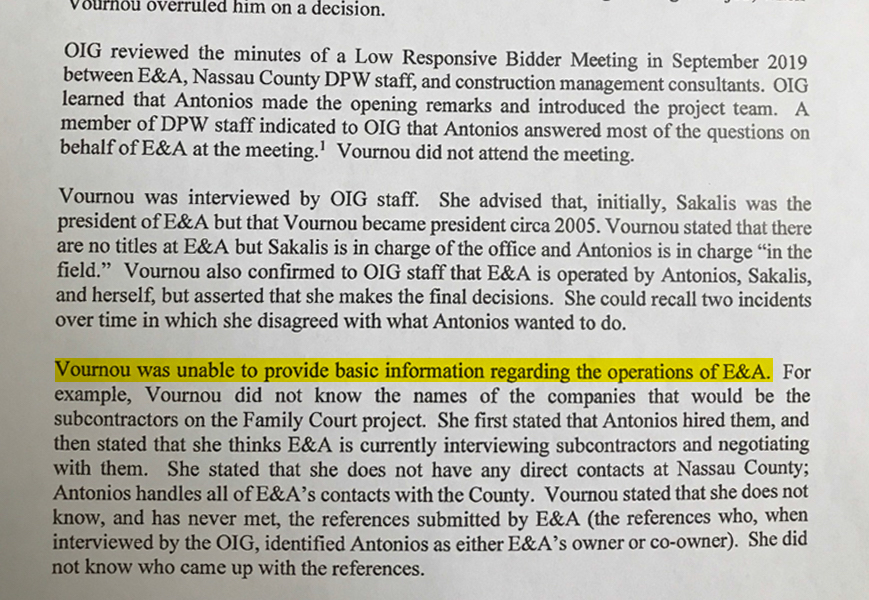 "Vournou was unable to provide basic information regarding the operations of E&A ."

The report said family members told the inspector general's office that E & A was a "small family business that 'doesn't believe in titles.' "

But the report noted that E & A has a total of $79 million in contracts with New York City and Nassau County, not including the pending $85.6 million contract for the courthouse.

The report pointed out that Kalliopi Vournou and her two children were identified as company principals in electronic filings with New York City's contracting system, PASSPort.

"It would strain credulity and disregard the foregoing evidence to accept that the company actually functions without any officers or principals apart from its declared" president and owner, the report said.

In a letter to Franzese on March 6, Kalliopi Vournou said she had no intention of deceiving the county.

"It is true that, perhaps, I am an overbearing Greek mother and that I should have appointed my children as officers of my company by now," Vournou wrote. 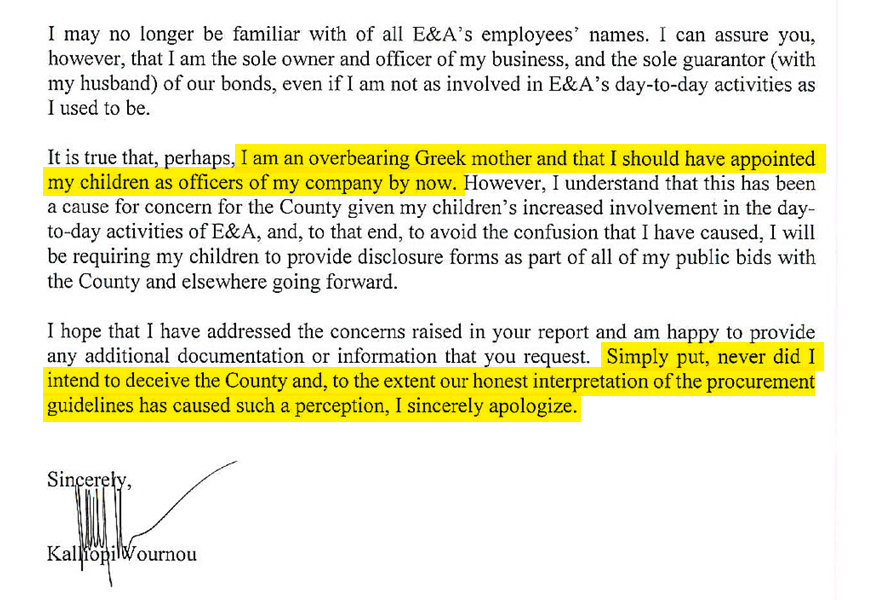 "I am an overbearing Greek mother and that I should have appointed my children as officers of my company by now ...Simply put, never did I intend to deceive the County and, to the extent our honest interpretation of the procurement guidelines has caused such a perception, I sincerely apologize."

The company has provided additional paperwork to the county, including new "principal questionnaire forms" filed by Sakalis and Vournou, and a list of campaign contributions by Antonios Vournou.

Kalliopi Vournou also wrote on March 6: "I will be requiring my children to provide disclosure forms as part of all of my public bids with the County and elsewhere going forward."

At the March 9 legislative committee meeting, Franzese acknowledged that the company had "cooperated" with the probe. In a subsequent interview, Franzese said E & A had "corrected their disclosures promptly."

Franzese did not take a position on whether county legislators should approve the courthouse contract.

"At this point, we wanted to obviously tell you what we’ve learned and at this point, you guys make the decision because everybody voted for you and not for me,” Franzese told legislators.

Presiding Officer Richard Nicolello (R-New Hyde Park) and Minority Leader Kevan Abrahams (D-Freeport) said that in light of Franzese's findings, they wanted to consider whether to appoint an integrity monitor to oversee the project.

Franzese said her office was capable of monitoring the project.

Nicolello, acknowledging the issues that Franzese raised, said legislators were between a "rock and a hard place." 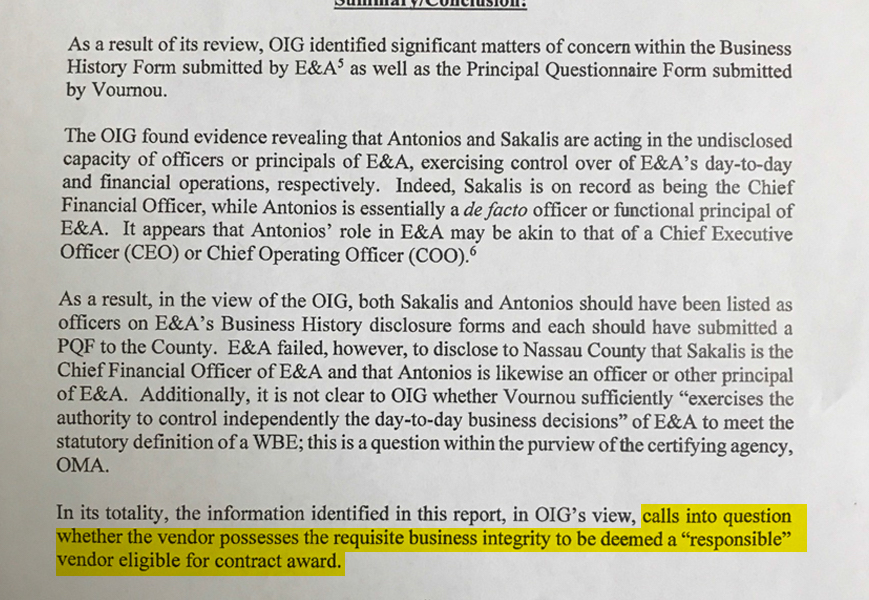 "... calls into question whether the vendor possesses the requisite business integrity to be deemed a 'responsible' vendor eligible for contract award ."

Nicolello continued, “We can vote this down." But “the crunch that we’re under is this project has taken so long, it's so many years. … It's not a particularly complex project, and so much rides on it."

“I feel that we have a lot of levels of accountability here," Curran said in an interview. "We’ve got the IG. … My administration is looking over it, we have the Department of Public Works doing their due diligence, and we also have a project manager."

Franzese told legislators on March 9, "The new disclosure forms are reflecting what my office saw in its investigation."

She continued, "at this point, based on everything, totality of the circumstances, we're satisfied with what we have."

Curran noted that E & A was "the lowest bidder by $6 million. I think that’s a pretty good number.”

She continued: “These are good union jobs, and I would love to get them to work especially as there is this uncertainty in the economy right now."