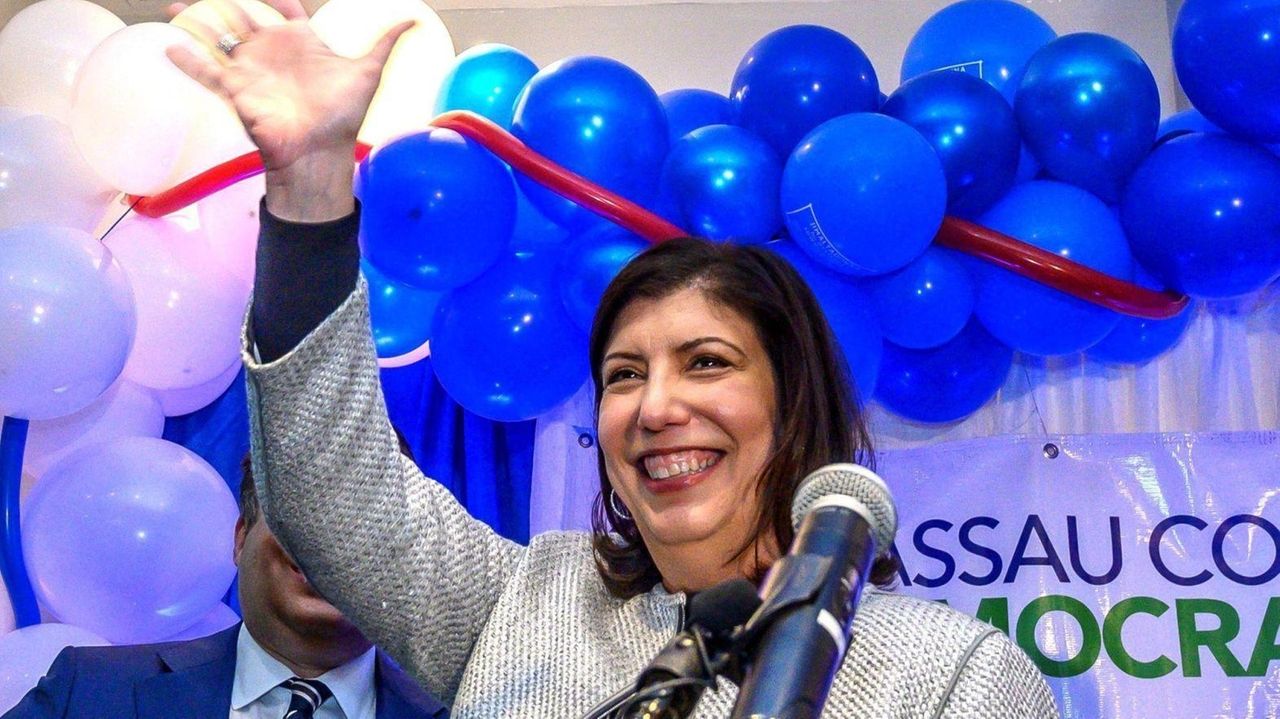 Nassau County District Attorney Madeline Singas, a Democrat, declared victory over her Republican challenger Francis X. McQuade Tuesday night in a race that came down to the candidate whom voters believe has the best experience to be the county's top prosecutor.

Singas thanked her family, labor unions and her staff before a large crowd of Democratic supporters.

“It’s been my absolute honor to be your district attorney the last four years. I’m humbled by this resounding victory. People went to the polls and said the DA’s office is just fine,” Singas said. “We run the office with one guiding principle to protect the people of Nassau County and the vulnerable among us.”

Singas, 53, of Manhasset had been asking voters to reelect her based on her track record as a veteran prosecutor in both Nassau and Queens. She won a four-year term in 2015 against former Town of Hempstead Supervisor Kate Murray, a Republican.

She said she has helped bring about a 25% drop in the county’s crime rate, gone after the MS-13 gang and attacked the opioid crisis by addressing drug trafficking and through drug treatment programs.

On Tuesday night she was gathered with fellow Democrats — including Nassau County Executive Laura Curran, Comptroller Jack Schnirman and Sen. Todd Kaminsky (D-Long Beach) — to watch the returns at the Garden City Hotel, where she also posed for pictures with a large group of family members.

"Both Democrats and Republicans have energized their bases and voters see that this year," Jacobs said. "There's no doubt the district attorney is going to win reelection."

Jacobs said he expects "political corruption and cleaning up Nassau County government will be a continuing priority" for Singas.

McQuade, 65, of Long Beach campaigned as a "new DA for a new day," warning against giving Democrats too much power as sweeping statewide criminal justice reforms take effect in 2020.

“I certainly enjoyed every moment of the campaign. I’ve done my very best,” McQuade said. “I was in it to win it.”

McQuade, who watched election results coming at a Nassau GOP gathering in Westbury, acknowledged his uphill battle to defeat an incumbent. He said he was proud of presenting an alternative view on how to prosecute crime in Nassau.

He touted his unique experience as a former police officer on Fire Island, Roman Catholic priest and his 25-year career as a criminal defense, immigration, international and municipal attorney.

While Singas and McQuade had focused on local issues such as street crime, opioid addiction and drug and sex trafficking, the package of criminal justice reforms passed by state legislators in April emerged as a key issue.

New York will stop using cash bail to get people accused of low-level offenses to return to court. Once enacted, most people charged with misdemeanor and nonviolent felonies will be automatically released.

The laws also set tighter deadlines for court filings to protect defendants' rights to a speedy trial, mandated that defense attorneys receive evidence or "discovery" materials within days of an arrest, and ended cash bail for most misdemeanors and nonviolent felonies.

The maximum sentence for the most serious "Class A" misdemeanors will be reduced by one day, to 364 days. The intent is to protect from deportation people who are in the country illegally; a sentence of one year previously could trigger deportation proceedings.

Many of these changes have prompted county GOP lawmakers, who hold an 11-8 majority on the Nassau Legislature, to try to mitigate the local impact of the new laws before they take effect Jan. 1.

McQuade believes he would be better suited to implement these changes. Singas says she has the experience and clout in the state to most effectively work with legislators.

Singas graduated from Barnard College in 1988 with a bachelor's degree in political science, and received a degree in 1991 from Fordham University School of Law. After law school, Singas worked as an assistant district attorney in Queens.

In 2006, former Nassau District Attorney Kathleen Rice hired Singas to lead the county's special victims bureau. Rice was elected to the U.S. House of Representatives in 2014, and Singas was tapped as acting Nassau district attorney.

McQuade graduated from St. John’s University law school in 1994 and received a bachelor of arts degree in history from Cathedral College in Queens in 1976. He also earned a master’s of divinity from Immaculate Conception Seminary in Lloyd Harbor in 1981.

With John Asbury and Dandan Zou