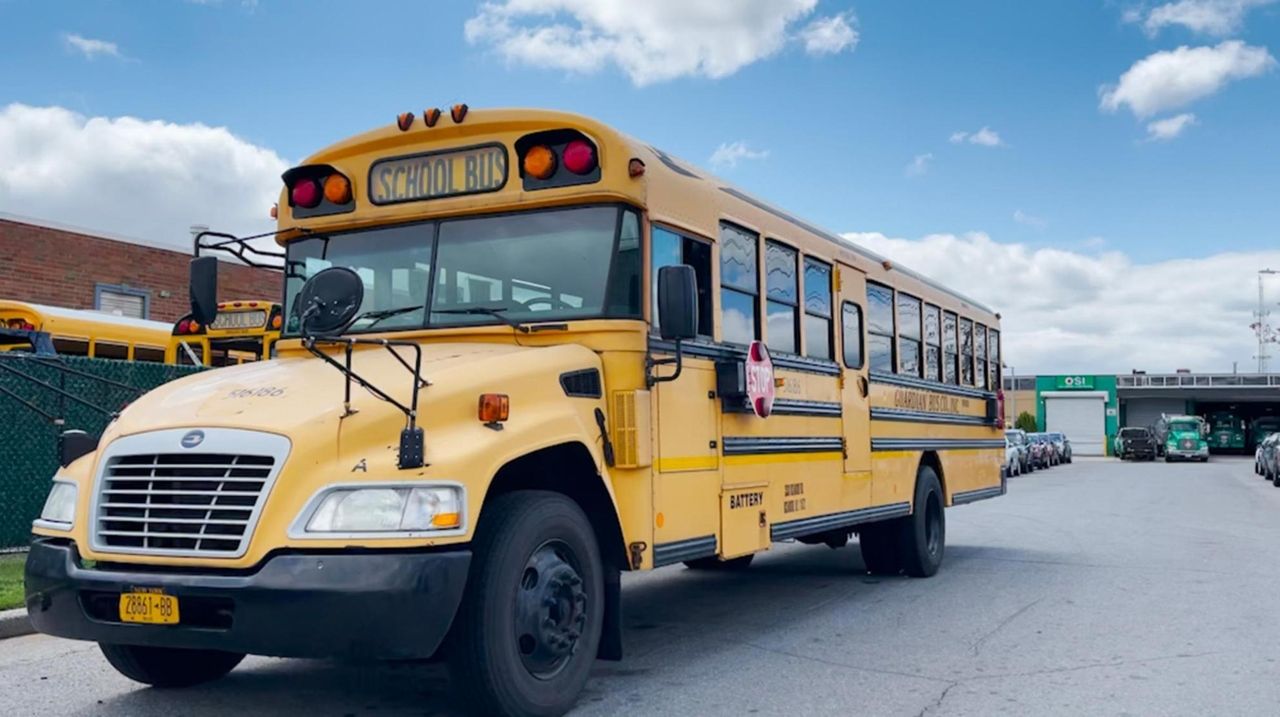 Automatic ticketing in Nassau of motorists who ignore stopped school bus signs would begin in September under a contract approved in a Nassau County Legislature committee Monday. It is expected to pass the full legislature soon.  Credit: Howard Schnapp

Nassau County could launch a new school bus camera program as soon as September to crack down on motorists who illegally go around school buses while students are exiting and boarding.

The program, in which tickets would be issued automatically, would be operated by Verra Mobility of Roslyn Heights under a five-year, $670,000 contract, according to resolutions approved unanimiously on Monday by legislative committees.

"The whole point of this is to condition drivers. It's to say 'Just stop,' "said Legis. Denise Ford, a Long Beach Democrat who caucuses with Republicans and is the chairwoman of the Public Safety committee.

Under the program, cameras would be attached to buses' stop arms to record license plates of drivers who fail to stop. Violations would be mailed to drivers.

There would be a 30-day grace period during which violators would be issued warnings.

Ultimately, violators could be forced to pay as much as $356, including a county adminstrative fee.

The county's Traffic & Parking Violations Agency would collect the fines. About a third of the revenues would go to Verra Mobility, with the rest going to the county.

Legis. John Ferretti (R-Levittown) asked if the 30-day grace period could be extended to 60 days, to mirror the program in Suffolk County.

In 2019, Nassau County issued 96 tickets to vehicles that went around school buses, a 21% increase from 2018, according to the county.

Violations would carry a $250 fine, which is set by the state. Nassau also could impose a $100 administrative fee.

Legis. Siela Bynoe (D-Westbury) said "we don't want people running the stop arm and we want to protect the kids," but "adding the fees on would be an overreach. I don't think I can support that."

Legis. Ellen Birnbaum (D-Greak Neck) said the camera program is "designed for safety and not to raise revenue."

Birnbaum said she wanted to " make sure that when we initiate this program we do it the right way and we tell people how much the fine will be."

TPVA Executive Director David Rich said he would have more information about the fee breakdown before the next legislative meeting and tell legislators whether it would be applicable.

School districts would have to opt in to the program

Also Monday, committees voted unanimously to approve a GOP-sponsored bill to require the county Department of Social Services to notify county legislators and other local officials 10 days before signing contracts with outside vendors to operate homeless shelters.

Backers of the measure cited Nassau's scuttled plan last fall to issue a contract to convert a former Hampton Inn hotel on Jericho Turnpike in Jericho into a homeless shelter.

Republican town and county officials, as well as Jericho residents who live near the now-vacant hotel, said the Curran administration failed to give the community a heads-up about the plan for transitional housing.

Advocates defended the shelter's placement. They said the housing arrangement would help the county's homeless, upgrading conditions for many students who live with their families in subpar arrangements throughout Nassau.

A county spokesman has said Nassau "followed all State laws and requirements regarding procedure and notification."

Legislators also voted in committee Monday to formally restore two tax exemptions to a 95-year-old Levittown woman whose tax bill was raised by $5,200 in error.

That measure, the shelter bill and the school bus contract with Verra Mobility require approval by the full Nassau County Legislature, which is controlled by Republicans and meets next on May 24.