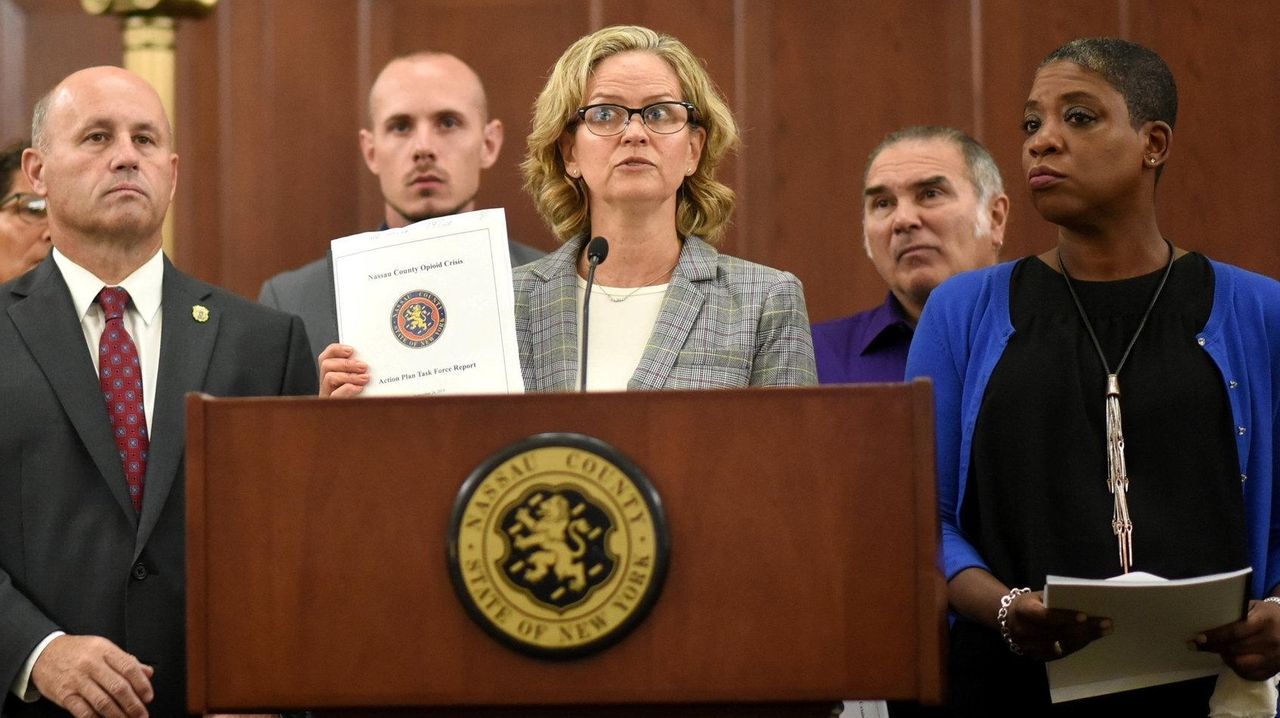 On Thursday, a Nassau County task force released a new report recommending that officials focus on preventing the "root cause" of the opioid epidemic by intervening early in children's lives to prevent long-lasting childhood trauma, and increased medical attention and resources to those suffering from addiction. Credit: Danielle Silverman

A new report by a Nassau County task force recommends that officials focus on the "root cause" of the opioid epidemic by intervening early enough in children's lives to prevent traumatic experiences from leading to drug abuse later in life.

"In order to get to the root cause of addiction, we need to address the actual problem. That problem is often untreated trauma," the report says. "There is a direct correlation between experiencing trauma, especially experiencing trauma before the age of 18, and substance abuse."

The 55-page report is a "road map for what needs to be done and what resources are needed for the future," Nassau County Executive Laura Curran said at a news conference in Mineola on Thursday.

"The opioid crisis has hit Nassau County hard," Curran said. "We need to do more."

Nassau Police Commissioner Patrick Ryder said, "no longer can we talk the talk, it's time to walk the walk and that's what this report does."

In recent years, both Nassau and Suffolk counties have experienced large numbers of opioid deaths.

There were an estimated 3,685 fatal opioid deaths in Nassau and Suffolk counties from 2010 through 2018, according to officials. The number of fatal opioid overdoses on Long Island fell in 2018 after dramatic spikes in previous years.

The report said children who have experienced trauma should be treated for it immediately.

"The child could process the trauma, the caretaker can receive possible services, and the child can develop skills to increase their resiliency and create healthy coping skills," the report said. "Resilient children are less likely to fall victim to substance abuse or high-risk behavior."

Legis. Siela Bynoe (D-Westbury), who co-chaired the task force with Nassau Police Commissioner Patrick Ryder, said research shows that when young people suffer trauma, such as a death in the family, it can lead them "unfortunately to … self-medicate, and in many times [it] turns into drugs, and we know that we have to preempt their trajectory."

The report said money should be provided to educate school districts and social service agencies about recognizing trauma. The recommendation did not specify a funding source.

The task force also recommended mandatory hospitalization for addicts who suffer overdoses and are revived using the medication Narcan, to help prevent them from relapsing. Monitoring would help patients who are struggling with cravings and prevent a relapse, the report says.

The report notes that Legis. James Kennedy (R-Massapequa) has proposed requiring that overdose victims be hospitalized for 72 hours after Narcan is administered.

"We know this legislation will assist our teachers and administrators who are on the first lines, who are essential to know how to identify where somebody is in trauma … ," said Bynoe, who suggested that Nassau consider using asset forfeiture money for the initiatives.

The most effective way to reduce substance abuse and high-risk behavior later in life is by providing early clinical interventions. The hope would be that once trauma is recognized, an appropriate clinical intervention can be enacted. The child could process the trauma, the caretaker can receive possible services, and the child can develop skills to increase their resiliency and create healthy coping skills. Resilient children are less likely to fall victim to substance abuse or high-risk behavior.

Report: Opioid crisis costs LI nearly $8B a yearThe LI economy lost $22.4 million a day in 2017 due to opioid addiction and overdose deaths, the study showed.