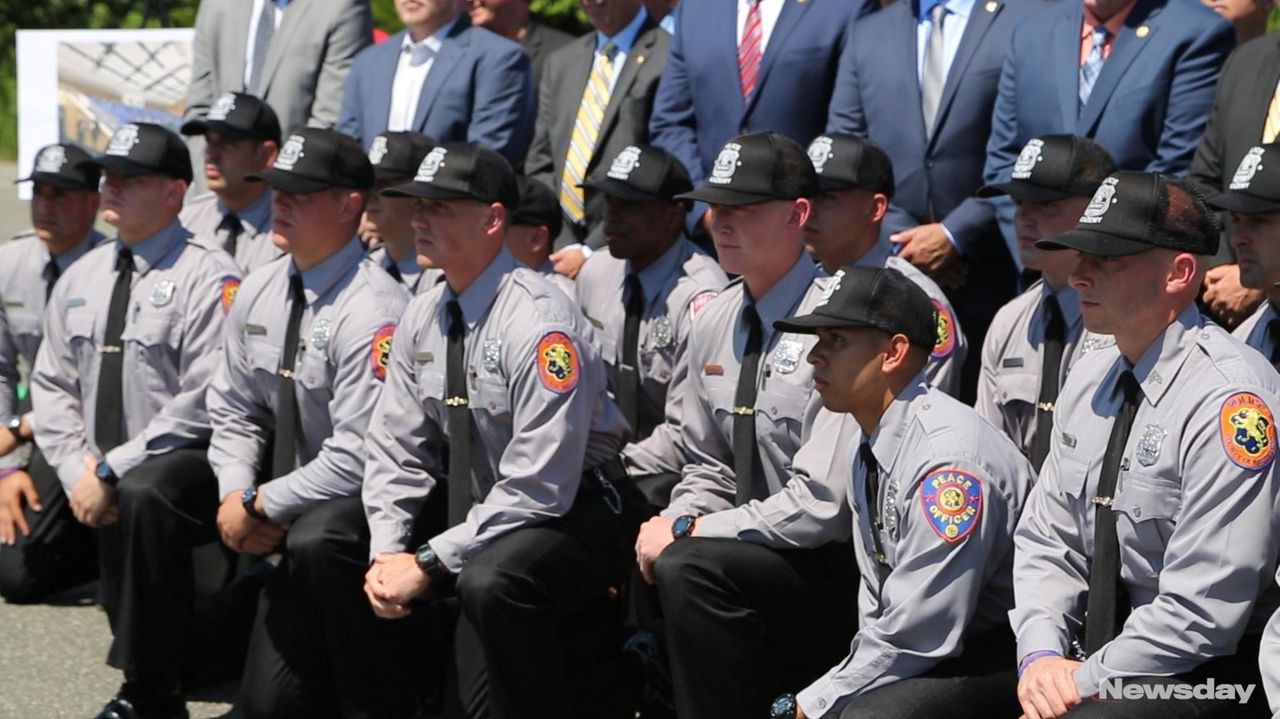 Nassau County officials announced plans to build and fund a new $54 million police academy on the grounds of Nassau Community College in Garden City, during a news conference Monday, July 9, 2018. A prooposal to fund the project also cleared a hurdle in the county Legislature on Monday. Credit: Newsday / Reece T. Williams; Barry Sloan

Nassau County officials on Monday announced plans to build and fund a $54 million police academy on the grounds of Nassau Community College in Garden City, giving new life to a plan that has been delayed for several years.

The Nassau County Police Department currently leases classroom space for its academy at the former Hawthorne Elementary School in Massapequa Park, with the county paying more than $700,000 annually in rent.

The county legislature first must approve the funding for the project. Legislative committees on Monday approved the proposal, which was among more than $150.3 million in borrowing projects County Executive Laura Curran proposed in amendments to the county's 2016 capital plan.

"For decades, the NCPD has been shuttling around to various squatting and empty spaces wherever it can find them," Curran said at a news conference at the proposed site of the new academy.

"If you've ever been inside this academy, it's an elementary school," Curran said. "The sinks are really low. When kids come to visit, they say, 'Hey, you guys don't have smartboards?' "

"Frankly, it's embarrassing," Curran said. "What we need is a cutting-edge and an advanced training facility . . . We need to have a facility that represents the excellence of this department and allows us to keep up with rapidly changing advances in crime-fighting."

The police department, with 2,461 sworn officers, has trained about 1,100 recruits over the past five years.

Police Commissioner Patrick Ryder said Monday many officers have been trained in "an elementary school where we use blackboards and chalk still, instead of using smartboards. We need to get better in the way that we train, so our cops can get better at policing."

County officials said they expect to break ground in the fall on the approximately 90,000-square-foot facility, which will have an auditorium and classrooms. There also will be an emergency vehicle operations course, a physical training and defensive tactics warehouse, and a facility to process classified information.

Nassau County officials announced the project in 2015, and projected a 2017 completion date.

Presiding Officer Richard Nicolello (R-New Hyde Park) said Monday he expects the legislature to fund project. The legislature must approve borrowing for the police academy at its next meeting, when the other capital projects also will be considered.

Minority Leader Kevan Abrahams (D-Freeport) said in a statement: “The police academy project is one that appears to be worthy of our support. We are working hard to finalize a comprehensive 2018 capital plan that will encompass this and other worthy projects that will improve the quality of life for all of our residents.”

Legis. Delia DeRiggi Whitton (D-Glen Cove), speaking about the capital plan, said, "We also intend to support this, but we do anticipate a lot of debate in the next two weeks."