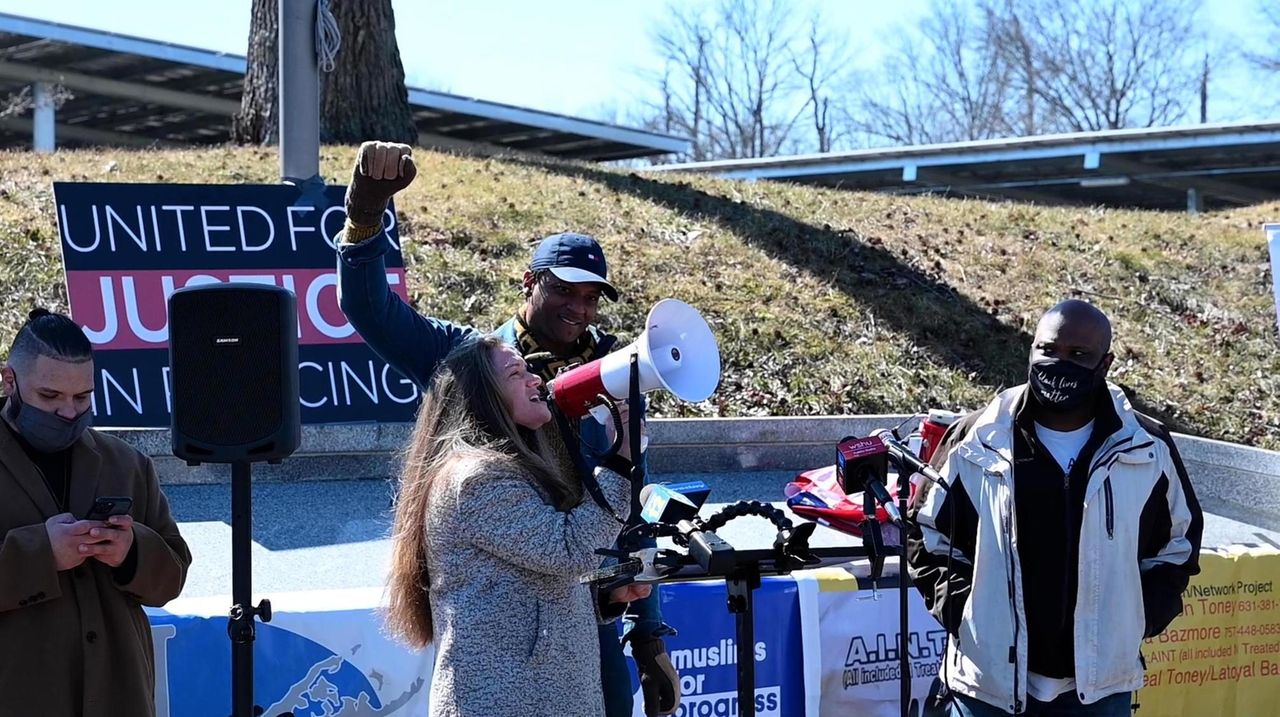 A rally was held Monday in Hauppauge where speakers applauded the Suffolk County police reform plan, although they pushed for even stronger reform. Credit: James Carbone

"The Nassau County police department is a great department, and should not be compared to any other agency, or any other incident around this country … but we have always said that we can do better, and with this reform we will do better," police Commissioner Patrick Ryder said.

The Republican-controlled county legislature must approve the plan, which is due to the state by April 1.

In June, Gov. Andrew M. Cuomo signed into law Executive Order No. 203 to require municipalities with police departments to reform their agencies or risk loss of funds. The order requires the plan to eliminate bias, implement de-escalation training, and conduct extensive outreach to members of communities that have frequent interactions with police.

In testimony, top police officials expressed support for initiatives including compilation of data about traffic stops, and vowed to work with LGBTQ members of the department and community.

But they objected to some suggestions from activists who developed their own reform proposal, called "The People's Plan."

Several of the activists broke with Curran in January, saying she had not consulted adequately with them in drafting her reform plan.

The officials rejected activists' calls for removal of School Resource Officers. The Uniondale, Roosevelt, and Baldwin school districts each have two such officers, and Ryder said administrators in those districts support the presence of the officers.

"It's all about the soft touch," Ryder said of the resource officers. "They bring Frisbees, they bring footballs, they [have] giveaways."

But in a nod to recommendations in "The People's Plan," county police officials added a section to their plan that focuses on a "tiered response to calls for mental health."

The first tier, "public education and awareness," involves informing the public about mental health programs and call centers, in which individuals in mental health crises can seek direct help rather than call 911.

The second tier deals with individuals in mental health crisis who have called 911.

Operators will be trained to identify such calls and ask if the person is in danger of hurting themselves or others, or has a weapon. Police officials would decide if the call should be transferred to a trained mental health professional, or if a police officer is to get involved.

In a statement, Curran thanked residents and advocates for, "their continued engagement and common focus to reform policing. It is my goal that every Nassau County resident, in every community, feels safe."

"Our reform package, which includes Nassau’s first body worn camera program reinforces our ongoing commitment to transparency and accountability," Curran said. "I look forward to the Legislature’s adoption of the plan."

Toward the end of the hearing, Ryder vowed to continue implementing reforms. "I will promise you this, the hard conversations are not over."