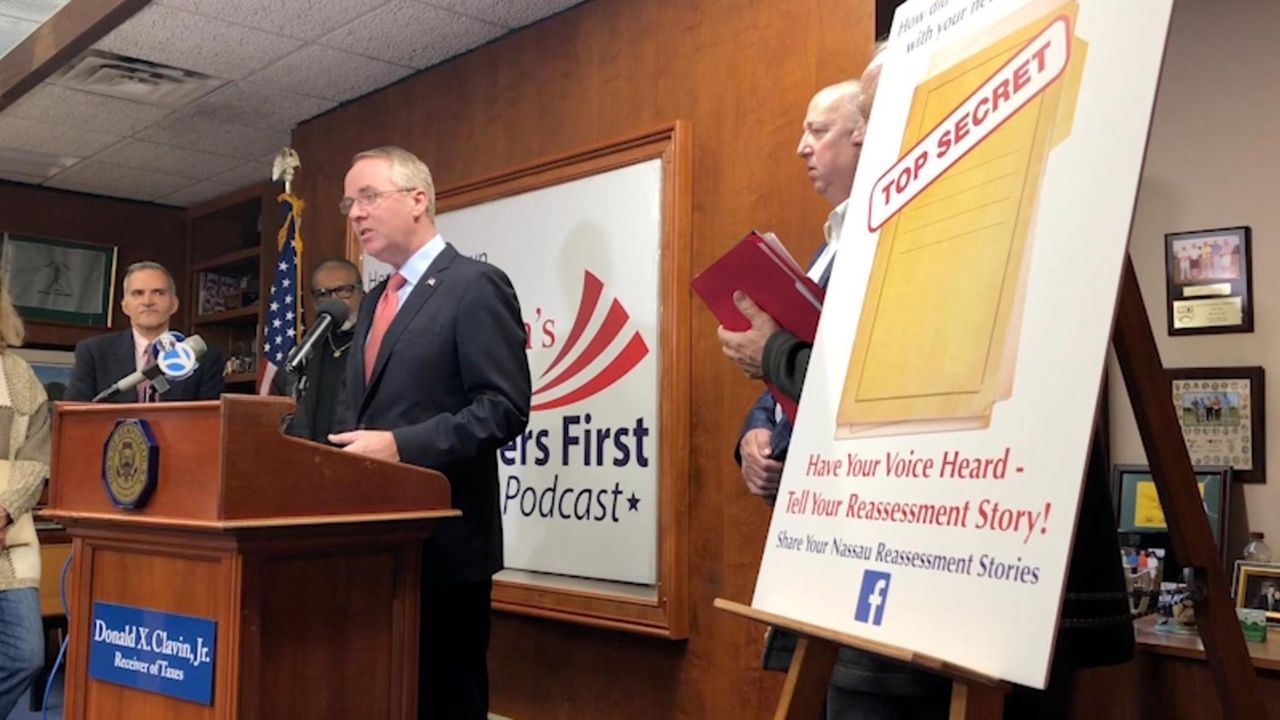 Clavin, a Republican, said he is creating the page because, he contends, County Executive Laura Curran, a Democrat, has not been transparent about the reassessment she authorized earlier this year.

“If there is one thing that is becoming evident, as people are receiving these [property tax] impact statements, they’re confused, they have questions, there is no transparency, there is no openness,” Clavin said at a news conference in his Hempstead office.

Clavin last week called upon Curran to hold public forums about reassessment in every Nassau community, but she did not respond to that statement.

Instead, Nassau Assessor David Moog said his staff would host forums in each of the 19 legislative districts while his office also continues to meet with hundreds of individual homeowners who make appointments to discuss their new property values.

“If you want to really help people, you have public meetings where you have public discussion and everybody gets the same answer,” Clavin said. “We need to hear the stories. Share your Nassau reassessment story. We want to hear it.”

Curran spokeswoman Karen Contino said in a statement, “It’s laughable that Mr. Clavin has held another news conference that was focused more on theater than truth for taxpayers. Throughout the reassessment process Nassau County has met with over 4,000 residents for one-on-one meetings and has provided more information online than has ever been available to Nassau County residents.”

Contino continued, “We are disappointed that public officials are using their offices to promote fearmongering and to distort the facts. It is time for Mr. Clavin to recognize that property owners want a fair and accurate assessment system.”

Four homeowners, who do not work for Clavin or the town, gave their own reassessment stories at his news conference.

Donald Coleman of Roosevelt said his assessment had quadrupled and his taxes were doubling. “I may have to get a second, third job to pay for it,” he said. “I just want to know what do I do, who do I talk to, where we can come to some type of even ground . . . something affordable so I can stay and live in my house.”

Tom Hoffman of Garden City said his son purchased a house in the village two weeks ago. “His assessment’s market value is $100,000 over what he paid, which doesn’t make sense,” Hoffman said.

At his assessor appointment, Hoffman said, “All I was told [is] it was done properly, without any explanation as to what was done.”

Jed Dallek of the Five Towns, who expects a $5,000 tax increase, said his home had been compared with a much higher-priced house in a different school district. He said he was told at his assessor’s appointment to file a tax challenge.

Jeanne Booth of Freeport said the assessor’s office directed her to go onto the county website to find an estimate of her condominium taxes but there was no tax impact statement.

Moog said Tuesday the county was still working on tax impact statements for Class Two properties, which are high-rise co-ops, condominiums and apartment buildings, and for Class Four commercial properties. He said both are “very complex” but should be online by Monday.

He said assessment disclosure notices had been mailed to all properties by Nov. 1 as required by state law.

Longtime tax attorney Fred Perry also attended Clavin’s news conference and repeated what he had posted on his website last week: His study found that 33 percent of the residential properties had been overvalued by an average 15 percent. Perry said he believed the tax impact notices were erroneous because the county used seven-year old data.

Contino, who previously called Perry’s conclusions “misleading,” asserted in her statement that Perry had made “millions of dollars” challenging assessments while Clavin failed to disclose that Perry contributed “thousands of dollars personally” to Clavin’s election campaigns.

Nassau Board of Elections reports show Perry made personal contributions of $1,600 to Clavin over the past 20 years.

“And, isn’t it ironic that the county executive did not disclose that she has accepted tens of thousands of dollars from firms that challenge Nassau County property tax assessments?” Clavin said.

A partial search of the state elections board website shows Curran has received $26,000 from the heads of at least two tax challenge firms: $11,000 from Shalom Maidenbaum and $15,000 from Sean Acosta.

The tax challenge firms also have a political action committee that has contributed to a variety of politicians, primarily Republicans.