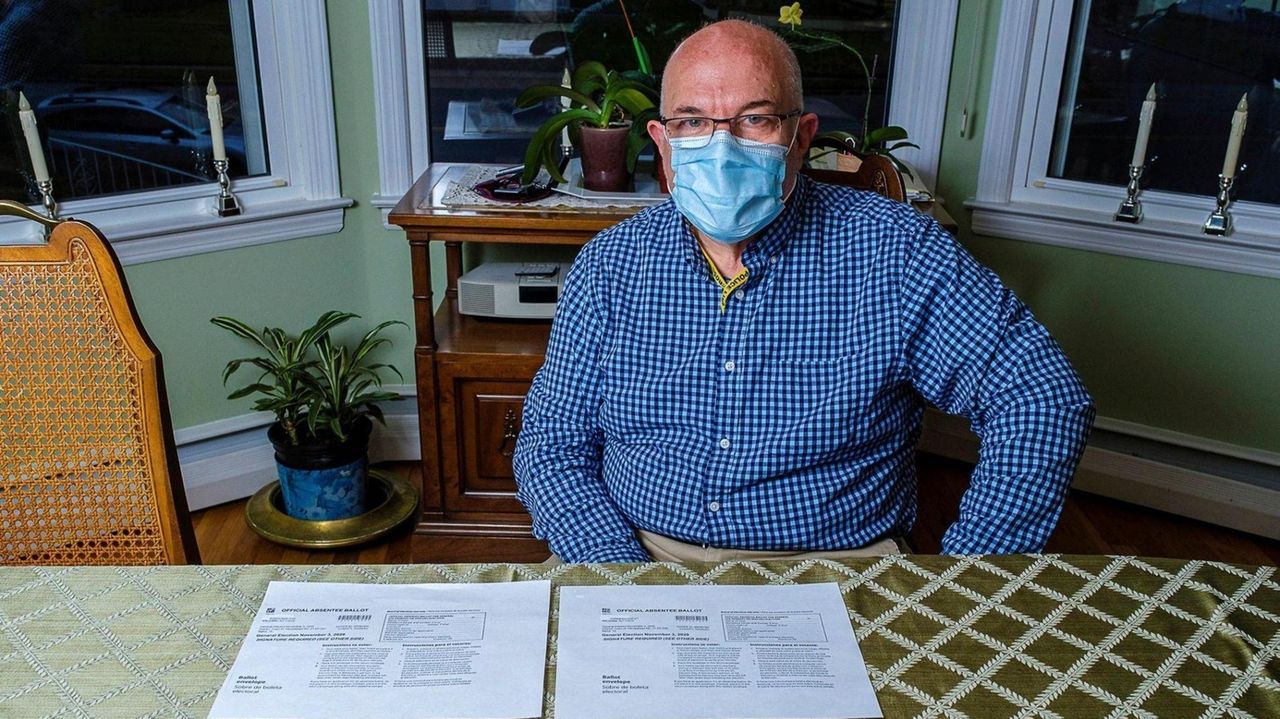 Christopher Cataldo, of New Hyde Park, spoke to Newsday on Tuesday after he noticed his mother and sister who had requested absentee ballots, received oath envelopes that contained the wrong addresses.  Credit: Jeff Bachner

Nassau election officials will resend absentee ballots to nearly 800 voters who received ballots with the wrong person's name and address on an envelope that voters must sign and return to the county election board.

The Nassau County Board of Elections said the vendor, Phoenix Graphics Inc. of Rochester, mailed out ballots with the wrong names on the "oath" envelope.

When voters return their absentee ballots, that envelope, which contains the completed absentee ballot, is placed in an outer envelope that is mailed back to the Nassau County Board of Elections.

Some Nassau residents said when they received their ballots, their names were correct on the mailing envelope. But the oath envelope inside contained the name and address of another voter.

Elizabeth Raftery, 59, of North Bellmore, said she and her mother's ballots both had different names and addresses on the oath envelope.

"Doesn't the company have safeguards in place to prevent this from happening? We’re not talking about a P.T.A. election," Raftery said. "We're talking about a presidential election. How could this happen in the U.S.?"

Christopher Cataldo, of New Hyde Park, said he noticed errors when checking the mail for his mother and sister, both of whom live in New Hyde Park and had requested absentee ballots. The oath envelope contained addresses for individuals from Baldwin, Cataldo said.

" … Why would two other people in Baldwin be in New Hyde Park," Cataldo recalled thinking. "It just seemed weird."

Cataldo, 67, who works at a finance company, said he was concerned that if the issue were not addressed, officials probably would "just toss" out his mother's and sister's ballots.

Suffolk's Democratic Election Commissioner Anita Katz said the county, which is using a different vendor to produce and mail its absentee ballots, has experienced no such problems.

The glitches in Nassau come as President Donald Trump, a Republican facing Democratic challenger Joe Biden, warns there will be fraud at the polls in November. Trump has suggested that some voters use mail-in ballots and also vote at the polls, to test the system.

According to a Hofstra University poll released Tuesday, only 20% of Republicans believe mail-in voting is secure, while nearly 88% of Democrats believe mail-in ballots are secure. New York election officials say the state has safeguards to make sure no one casts more than one vote.

Nassau Democratic Elections Commissioner Jim Scheuerman said all voters who received erroneous oath envelopes were "being sent out a correct ballot and being told to discard the wrong one."

Scheuerman said the county provided accurate information for about 90,000 voters to Phoenix, and blamed a "data error and a human error" at the company for the envelope errors. The final batch of about 30,000 absentee ballots will be handled by election board staff, while more are pouring in, Scheuerman said.

Joseph Kearney, the Republican commissioner, said, "we caught it, we investigated and we resolved the issue as to the printer and going forward, we’re going to do it ourselves."

Representatives of Phoenix Graphics did not respond to requests for comment Tuesday.

A recorded telephone message at the company encouraged voters to contact their board of elections, and said Phoenix was "working hard with your Board of Elections to ensure that everyone will have what they need to vote."

Katz said the board contracted with Fort Orange press in Albany for production of absentee ballots. "We have not had any of the problems they have had," Katz said of Nassau.

Mailing of Suffolk absentee ballots began Monday after their release was held up by a lawsuit over Democrat Nancy Goroff's spot on the Working Families Party line in the 1st Congressional District race, Katz said. The lawsuit was thrown out and Goroff has the WFP line, Katz said. Goroff is challenging Rep. Lee Zeldin (R-Shirley).

New York City voters have also received oath envelopes with incorrect addresses, according to news reports. The city's elections board blamed the problems on Phoenix, which it hired to distribute absentee ballots. Voters will be mailed corrected ballots, according to a story by The Associated Press.

As of February, Nassau County had 952,229 active registered voters, including 376,972 Democrats and 298,138 Republicans, according to state Board of Elections data.