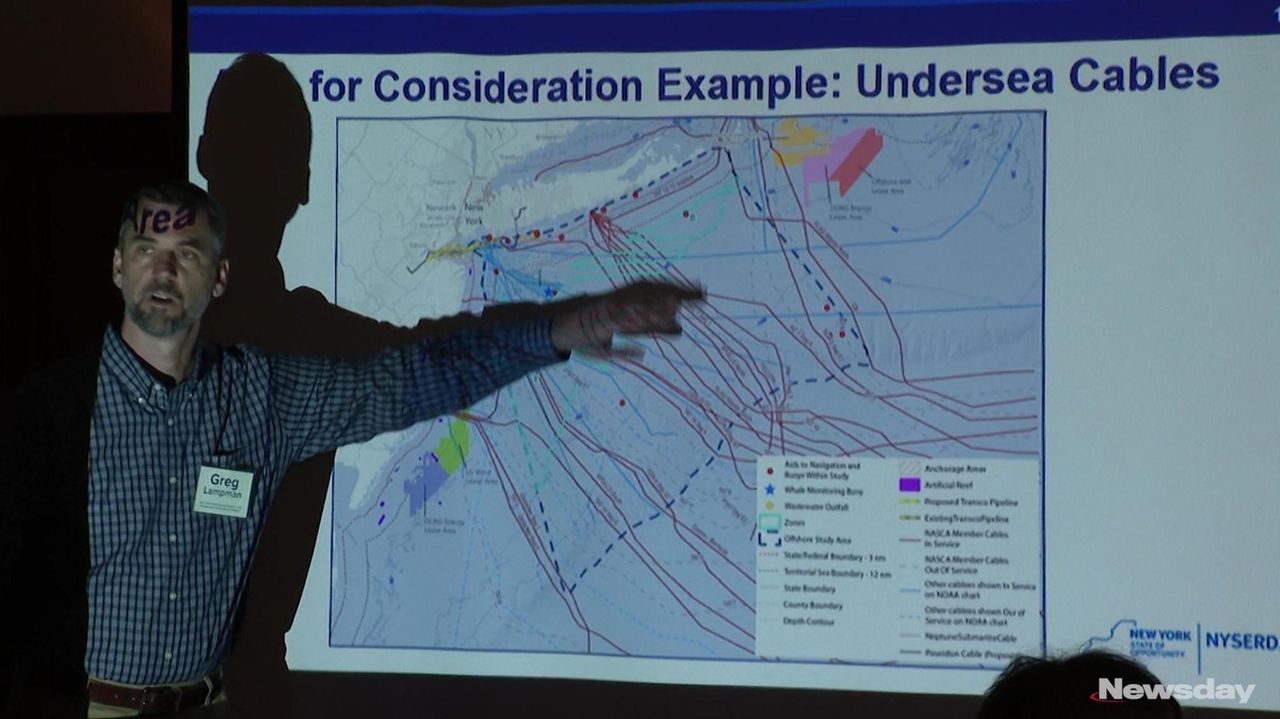 A new blueprint to build hundreds of wind turbines off the coast of Long Island was unveiled Monday at a public meeting in Southampton. New York state wants to use wind to power more than 1.2 million homes on Long Island. The New York State Energy Research and Development Authority presented its blueprint to place roughly 240 wind turbines 21 miles off New Jersey and part of the South Shore of the Island. Officials say it would take care of 13 percent of the Island's energy needs. Credit: News 12 Long Island

At a public meeting in Southampton on Monday to discuss the state’s blueprint for offshore wind development and proposed offshore area maps, state officials discussed reasons for removing a large proposed East End wind-farm area from federal consideration, including visual and fishing impacts.

The federal Bureau of Ocean Energy Management (BOEM) released the maps for proposed New York areas last month, seeking comments and proposals. The agency will accept comments through May 29.

New York State specifically removed the East End areas from its proposed wind-farm maps in a blueprint released earlier this year. New York prefers wind farms to be at least 21 miles from shore. The Block Island wind farm, at 15 miles from Montauk Point, can be clearly seen from Montauk.

Harris said alternative ocean areas to the west, more than 21 miles from the coast, presented “less risk and greater value” for offshore wind. She said the areas were better situated to link with electricity transmission lines on Long Island.

The state will make that argument as it seeks to persuade federal officials to exclude the East End areas for consideration for offshore wind farms, Harris said Monday at the Southampton hearing.

“We certainly hope they’ll arrive at some of the same conclusions as New York has,” she said.

Harris also said the state prefers the federal government “think about leasing in phases,” with preferred areas farther out to sea offered first. The BOEM is holding a task-force meeting Wednesday about the so-called New York Bight wind-energy areas in Newark.

NYSERDA has scheduled a second meeting on wind-farm plans in Melville on Tuesday night.

Southampton Town Supervisor Jay Schneiderman said he was “surprised to see” the East End sites “back on the table” after the state moved to remove them from consideration.

“I have serious concerns,” about their inclusion, he said, including “fishing concerns and frankly aesthetic concerns.”

Schneiderman said wind turbines sited about 15 miles from shore would be “highly visible,” and would “forever change” the horizon. He urged the BOEMt to “take a serious look and remove those two areas” from consideration.

Julie Lofstad, a Southampton Town councilwoman whose family is involved in commercial fishing, said Monday that, “every fisherman I have spoken with is very concerned about their future and the future of the entire fishing industry” because wind-lease areas are “where we fish in the summer and where we fish in the winter.”

BOEM spokesman Stephen Boutwell noted the agency’s request for comments on the new areas is one of the first steps in an eventual leasing process, and lets all parties “provide input on these areas prior to further modification.”

BOEM “will take all information and feedback into consideration before making decisions,” he said.

BOEM has already awarded a lease to Norway-based Statoil for a project around 15 miles off the coast of Long Beach. LIPA has awarded a contract for Deepwater wind to build a 90-megawatt project 30 miles from Montauk, off the coast of Rhode Island. New York State envisions awarding some 2,400 megawatts of wind power from turbines off its coast, including at least 800 megawatts in the next two years.

Assemb. Fred Thiele (I-Sag Harbor) in a statement issued support for NYSERDA’s blueprint, but said BOEM’s additional areas “should be rejected out of hand.”

He also said no project should be approved “until it is demonstrated that any harm to the [fishing] industry can be avoided.”

Barney the Bull rescuers to public: Call 911, don't try anything yourselves
LI restaurants, theaters push back on state's vaccine suggestion
Riverhead to activate remaining downtown security cameras
It will take just over 2 weeks for all LI schools to welcome back students
Seeking a 'New England' feel for hamlet's blighted downtown
Sales tax revenue increasing, but analysts are wary
Didn’t find what you were looking for?