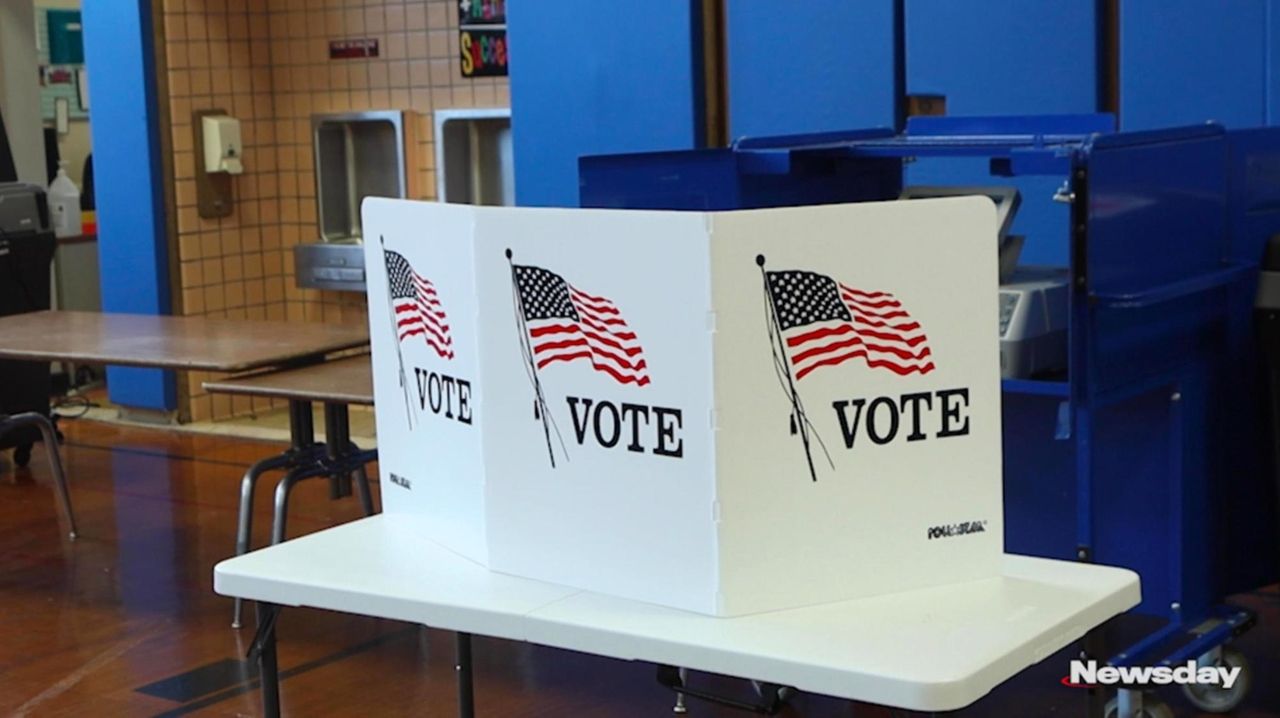 This year's presidential election, notable for its partisan intensity in the midst of a worsening pandemic, was facilitated by poll workers who worked long days to make sure every vote was legitimate, kept safe and counted correctly. Credit: Newsday / Steve Pfost; Debbie Egan-Chin

Start a 17-hour work day before dawn and walk 17 miles — that's what it takes to turn the gears of this country’s democracy, making sure every vote is legitimate, kept safe and counted correctly.

The pay is modest: typically $13 an hour. The pressure is considerable, especially in a presidential election, let alone one so notable, so memorable for its partisan intensity in the midst of a worsening pandemic.

"If you are not on your ‘A’ game, it all will fall apart quickly," said Sal Russo, 56, of Farmingville, a GOP poll coordinator with 25 years of experience.

Without dedicated poll workers, said Russo, who walked 44,398 steps on Nov. 3, "this whole thing will crumble — and we definitely were shorthanded."

So what motivated these individuals to shepherd voters through the real democratic machine?

"I'm honored to be there and to get you to vote correctly," Russo said.

"It’s what makes this country great," said Vikas Girdhar, 34, of Hicksville, a Democratic poll worker in Nassau County, whose parents have undertaken this responsibility for about two decades.

"It’s participating in democracy, you’re moving the process along — it’s an honor."

To Robert Caggiano, 61, of Port Jefferson Station, a 25-year veteran Republican poll coordinator: "If you have something you don't like about the system, why not try to change it? It's up to you."

Poll workers must embrace the exacting nature of the work with all its clearly specified procedures and safeguards. And they do.

Said Denise Kern, 66, of Kings Park, a Suffolk County poll worker: "I am a Republican; I wanted to make sure everything was done right."

For her, "the real reward is my faith in the system," which pairs poll workers of different parties together.

They must make all decisions jointly, from verifying who votes to ensuring each and every ballot — including ones with errors, called "spoiled," which are nullified — is accounted for before being sealed, locked and delivered to the boards of elections.

"We always do the tables in a bipartisan manner; that way I know everybody's watching," said Russo. "There are no shenanigans going on, not in my district."

Kern, saying the sign-in procedure would catch any two-time voters, agreed: "There's no chance of voter fraud or anything like that where we are."

Novice Democratic poll worker, Karen Levine, 59, of Halesite said the experience was "very sobering because the Board of Elections takes this so, so seriously. I was just really impressed with how stringent they are."

After three hours or so of training, poll workers take an oath.

"I actually got worked up — and this is just the Suffolk Board of Elections, one little county in the whole nation," she said.

That was not the only emotional high point.

"When there was a new, first-time voter, we all clapped; I thought that was the sweetest thing," she added.

One of the paramount responsibilities of course is remaining scrupulously nonpartisan.

"I’m not asking who you vote for: Don’t tell me," said Julie Dade-Howard, 65, of Huntington Station, a Democratic poll worker. Like many of her peers, she was encouraged by the heightened interest in this presidential election.

"I’m excited about early voting; anything that increases voting, I want to encourage that."

Still, even seasoned poll workers were apprehensive given the intensity of this election season.

"People thought there might be chaos … that there would be violence on some level," said Denise Ham, 68, of Dix Hills, a Democratic poll inspector.

Instead, she said, "people were looking out for each other."

For some voters, perhaps emerging from months of semi-isolation due to COVID-19, the waits were leavened by camaraderie.

"I felt like it was an opportunity for people to talk to each other," Ham added.

Despite putting up with sometimes hourslong waits in the rain as turnout rocketed, voters for the most part were patient. There were more questions this time, veteran poll workers said, about proof of identity, with many voters displaying drivers licenses though no documents are required, just a birth date and a signature.

Battles over masks were almost nonexistent, a number of Suffolk poll inspectors agreed.

"COVID definitely threw a bit of a wrench into the works because you had to keep your distance and every time somebody touched something you had to clean it," Caggiano added, from the sign in stylus to the voting booths to the ballot scanners.

To anyone wondering about volunteering, Rickey Recard, 64, of Melville, a veteran Democratic poll inspector, said: "If you feel it in your heart, yes, to be involved in any way, shape or form, it's a gift … and it is a long day, but somebody has to be there to be sure it goes OK."

He concluded: "I am an American; we have this process; nothing is greater than that."