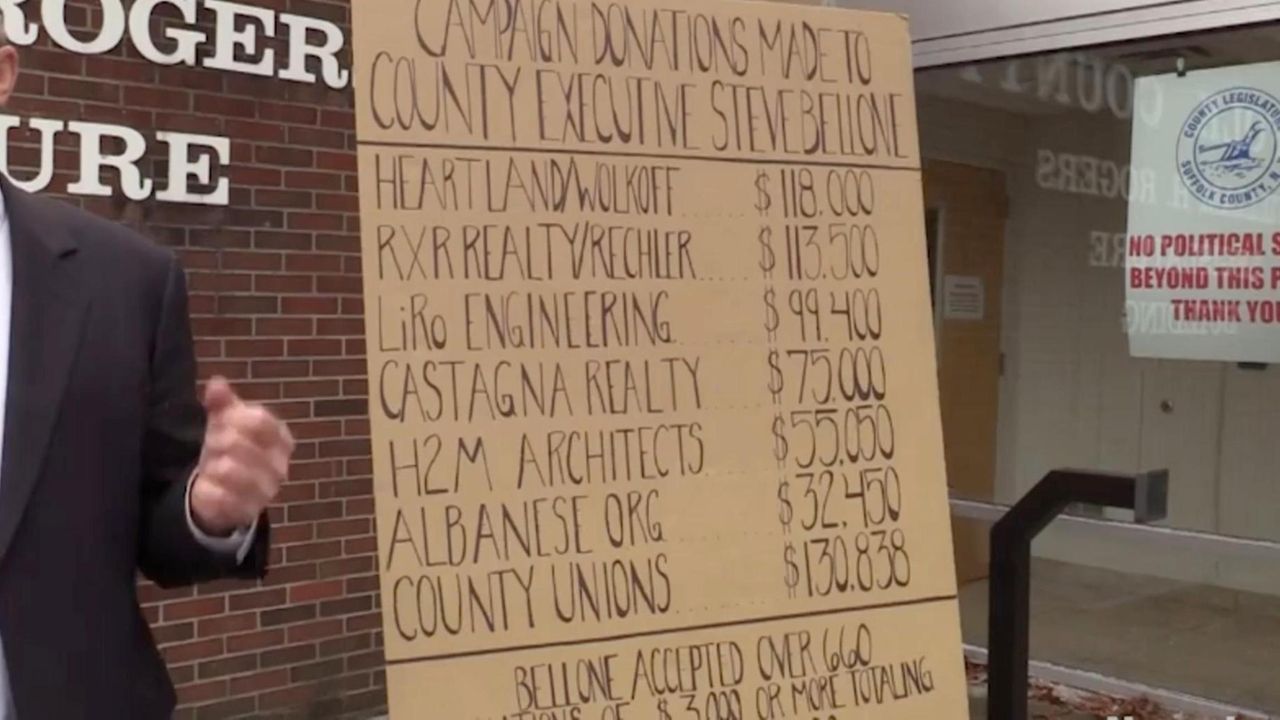 Republican Suffolk Legis. Robert Trotta launched his candidacy for county executive Tuesday with a blistering attack on Democratic incumbent Steve Bellone, demanding he return more than $4 million to big donors within 72 hours and "give the government back to the people.”

Trotta, a retired police detective, made his announcement before reporters and about a dozen supporters outside the legislative building in Hauppauge backed by a handmade chart listing some of Bellone’s largest donors.

“I’m going to end the culture of corruption and the pay to play . . . in Suffolk County,” said Trotta. ”It’s time to stop the bleeding.”

He assailed Bellone for increasing the county’s debt from $1.2 billion to $3.4 billion since taking office.

Trotta also blamed Bellone for five bond downgrades and what he said were illegal back door taxes that have made Suffolk an unaffordable place to live.

“I look at my wedding pictures and none of my friends can afford to live here any more,” Trotta said. "It’s time we have an adult running Suffolk County, rather than a guy . . . putting a rock and roll hall of fame in Wyandanch.”

Trotta was referring to Bellone's efforts to bring the Long Island Music Hall of Fame to downtown Wyandanch. The hall of fame has dropped plans to open its first museum in the hamlet.

Even Before Trotta’s news conference, Jason Elan, Bellone’s spokesman, fired a broadside at the lawmaker.

“Rob Trotta is a fiscal fraud whose first act as a county legislator was attempting to scam Suffolk taxpayers out of tens of thousands of dollars“ by trying to delay taking office, Elan said.

“While County Executive Bellone was cutting government, holding taxes below the [state two percent] cap and fighting a corrupt former District Attorney, Rob Trotta was double-dipping on the taxpayers’ dime. If he cares so much about protecting the taxpayer, he can follow the County Executive’s lead by voluntarily cutting his salary and paying into his health care.”

Trotta received an ethics board opinion saying he could legally delay taking office by one day in 2014, so he could get a $7,000 police vacation time payout. Trotta decided later against taking it.

But he said, “you are looking at the stupidest double-dipper in the history of double dipping.“ Trotta noted that a former police partner made $260,000 last year under what Trotta said was a bloated contract Bellone gave police. Trotta also said he would have made $70,000 more had he not retired.

Elan also said Bellone will not return any past campaign donations. “Campaign contributions do not affect public policy,” he said.

Elan also criticized Trotta for recently taking advice from former County Executive Steve Levy, a Republican who had to give up his $4 million campaign fund and agree not to run for re-election to close a district attorney probe of his fundraising.

Trotta also criticized Bellone for taking credit in a campaign mailing for firing ex-county police chief James Burke, who later was convicted on federal charges of beating a burglary suspect and then orchestrating a cover-up of the assault.

Trotta said Bellone “did nothing” for three years despite repeated news media reports of alleged wrongdoing by Burke, who resigned in October 2015.

Trotta, who would have to forego seeking re-election his legislative seat if he runs, said “a primary is not in the best interest of the Republican party.” He said he expects all sides to “get in a room, talk about it and decide who is the best candidate” by Feb. 26 when the GOP can begin circulating nominating petitions.

Trotta said he could support another candidate who is willing to “take the same hard line approach” against Bellone.

Suffolk Comptroller John Kennedy, the other major Republican contender, said he met with Suffolk GOP chairman John Jay Lavalle for a half-hour late Monday Kennedy called their conversation “positive and cordial. I’m doing my due diligence and it seems things are lining up the way they should.”

Kennedy said he expects to make a decision about the county executive race by Friday or Monday.