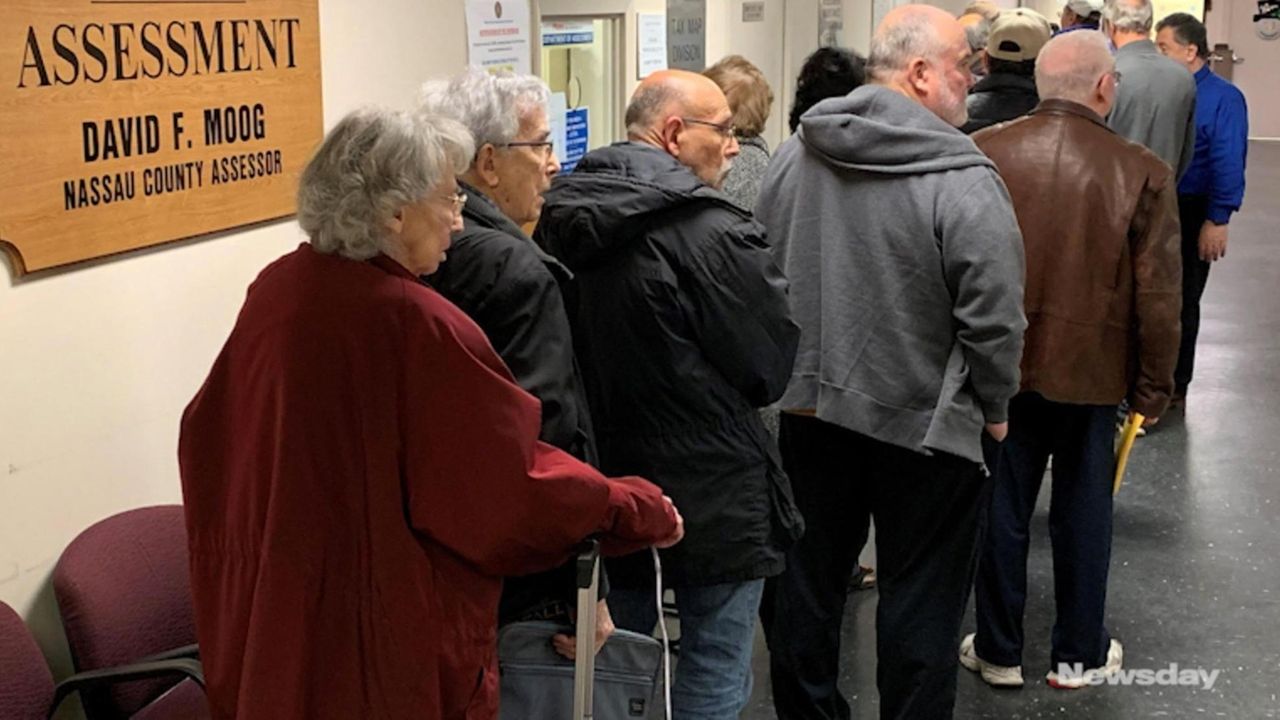 Richard Eschmann of Merrick was one of hundreds of Nassau taxpayers, primarily seniors, who packed into elevators and hallways outside the county assessor's office Tuesday after an erroneous robocall spread confusion about whether they would qualify for tax exemptions. Credit: News 12 Long Island; Photo Credit: Howard Schnapp

Hundreds of Nassau County taxpayers, primarily seniors, packed into elevators and hallways outside the county assessor's office Tuesday after an erroneous robocall spread confusion about whether they would qualify for tax exemptions.

The call, featuring a prerecorded message from Nassau County Executive Laura Curran, went out mistakenly to about 400,000 households in the county on Monday night. It was intended for only about 3,500 people, who according to county records were due for a reminder message.

County officials blamed the error on "a computer glitch."

“It’s not right,” said Gloria Smith, 67, of Locust Valley, as she waited to enter an elevator at the county building at 240 Old Country Rd. “I got a message and it could be thousands of dollars. But I have proof — I filed my renewal in August.”

Clutching a manila envelope with her tax papers, Smith by about noon had been waiting on line for nearly an hour along with other seniors, some using canes and walkers.

Workers in the county's Department of Assessment spent most of Tuesday morning fielding angry questions and corralling long lines. At noontime, queues snaked down two hallways and outside the building, where residents stood in 35-degree temperatures.

Alice Restivo, 62, of Hicksville, waited for about an hour on a line inside the building only to be turned away because she was not a senior. She said she had tried calling the assessor's office all morning but got a busy signal.

“I’m annoyed. Look at all of these people here? Where is she? Why isn’t she here? Laura Curran should be here apologizing to people on this line,” Restivo said to a county employee.

Jack Bart of Merrick, who uses a walker, eventually needed a rolling desk chair to stay on line. Bart, 78, said he was confused after receiving the call and concerned he would lose out on a much-needed tax exemption.

“I don't want to pay more than I’m supposed to pay,” Bart said. “I thought when I filed the renewal I was doing what I was supposed to do. Then I got this call that if I don’t come down before Jan. 2 I would lose out.”

About the erroneous call, Bart said: “I think this is inefficient and we need new leadership.”

About 800 people signed into the assessor's office on Tuesday, according to an official count released Tuesday. More than 300 of them filled out applications for exemptions; another 300 verified their applications already had been received, and 200 left with blank forms, said Curran spokesman Michael Martino.

Curran, a Democrat, also issued an email statement Tuesday correcting the error and apologizing for the inconvenience. She also visited the assessment office in the afternoon to apologize to residents in person, officials said.

"Protecting our seniors is of paramount importance and the call was to urge them to renew if eligible," Curran said in the statement.

Administration officials sent out the first robocall at 6 p.m. Monday. At 10 a.m. Tuesday, another automated message went out telling residents to disregard the initial call. Both went to household landlines. Residents had arrived as early as 8 a.m. at the assessor's office.

The senior exemption applies only to residents 65 years or older who have an annual income of $37,399 or less. Many seniors have already filed for the 2019-20 year; county records showed that 3,500 seniors needed a reminder to file a renewal by the Jan. 2 deadline. The exemptions can reduce taxes by between 5 and 50 percent, depending on income.

Every year, 11,000 senior tax exemptions are filed with the assessment department, officials said.

Last week, Curran signed a local law authorizing county Assessor David Moog and the assessment department to extend the deadline for filing senior tax exemption renewal applications upon a showing of "good cause," such as an illness or other hardship.

Legislative Presiding Officer Richard Nicolello (R-New Hyde Park) said the county executive office's error resulted from "pure, unadulterated incompetence. You have seniors who have been called out of their houses because they are frightened they are going to lose their exemptions. It's a real shame. It's a real disgrace.”

Nicolello and the county's GOP legislators for weeks have highlighted residents' concerns over Curran's implementation of a property reassessment plan.

Bill Biamonte, chief of staff for Democratic county legislators, said: "Moving forward, it is crucial for the assessment office to drive straight, communicate accurately and commit no more unforced errors."