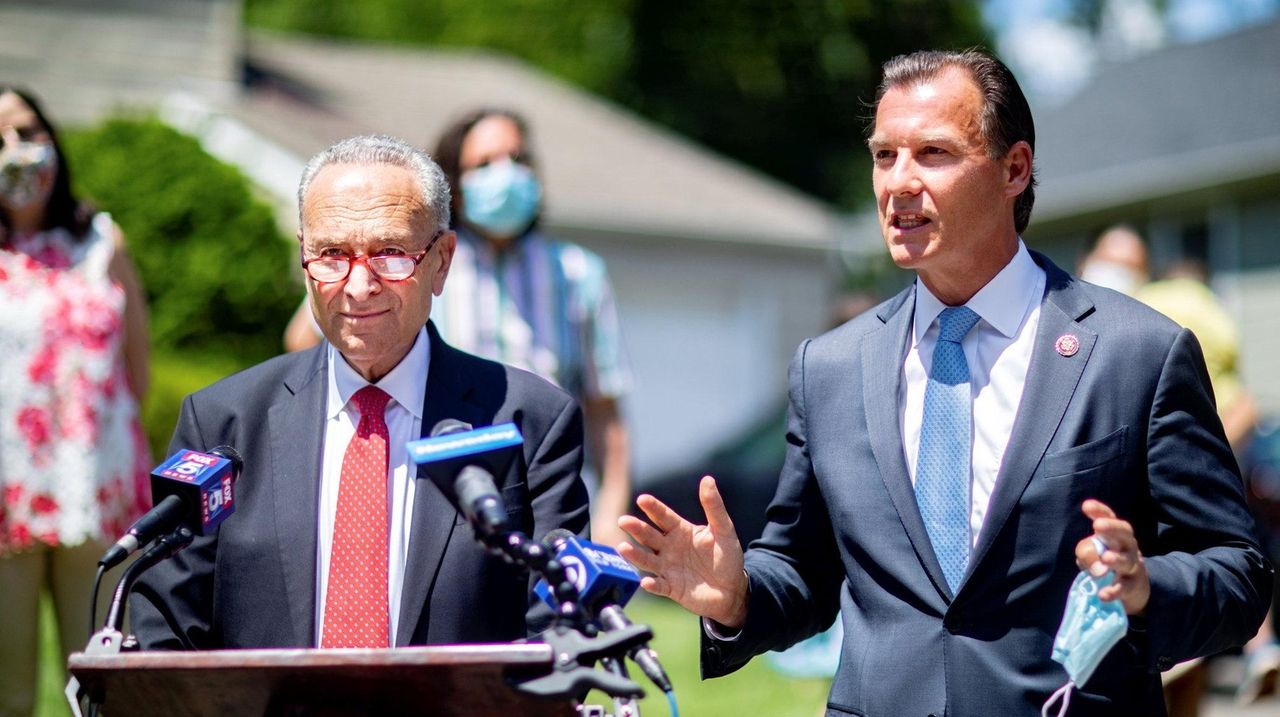 With Democrats now in control of both houses of Congress and the White House, Senate Majority Leader Chuck Schumer and Rep. Thomas Suozzi have reintroduced legislation to restore the full State and Local Tax deduction, a move that would cut taxes for thousands of Long Island homeowners, Newsday has learned exclusively.

The lawmakers simultaneously introduced legislation Thursday that would eliminate the $10,000 SALT cap on federal tax returns that was imposed as part of the GOP's $1.5 trillion 2017 tax reform bill. The new bill makes no other changes to the tax code.

The measure, which has bipartisan support in the House but only Democratic sponsors in the Senate, will likely be folded into "must-pass" legislation, such as a COVID-19 relief package, to ensure its approval, officials said.

"This is a very high priority," Schumer said. "The cap on the SALT deduction was a nasty proposal aimed at blue states and it has hurt the middle class on Long Island and elsewhere rather significantly."

Eliminating the cap, Schumer said, is critical as the economy struggles to recover from the coronavirus pandemic.

"This is another way to pump money into our economy," he said.

Suozzi, a Glen Cove Democrat and one of the loudest advocates for restoring the full SALT deduction, said his district, which includes parts of Nassau, Suffolk and Queens, was particularly hard hit by the cap.

Roughly 53% of residents in Suozzi's 3rd District previously used the deduction, writing off an average of $33,317 per year — the highest in the country, according to IRS data.

"This is enormously important for my constituents and enormously important to New York State as a whole," said Suozzi, who sits on the Ways and Means Committee, which drafts changes to the tax code and where resurrection of the deduction is likely to take place. "A lot of people are leaving New York between the coronavirus and the loss of the SALT deduction. And the people still living here are stuck holding the bag."

Under the former code, taxpayers who itemized deductions on their federal income tax returns could deduct state and local real estate and personal property taxes, as well as either income taxes or general sales taxes.

The Democrat-led House passed legislation in 2019 repealing the cap, but the measure was blocked by the Senate, which was controlled at the time by Republicans.

Lawmakers said the measure has a better chance of success with the Senate now split 50-50 between Democrats and Republicans and ties broken by Democratic Vice President Kamala Harris. President Joe Biden has expressed support for repealing the cap.

But Suozzi says garnering support for the bill will be a "tough fight" and could come down to finding offsets to pay for the lost revenue, potentially by boosting income tax rates on high earners.

Freshman Rep. Andrew Garbarino (R-Bayport), a GOP co-sponsor of the bill, said the "cap unfairly penalizes Long Islanders and has left a devastating effect on New York. Not being able to deduct state and local income taxes is a case of double taxation, which is the last thing my constituents need during a global pandemic."

The bill is also co-sponsored by Rep. Lee Zeldin (R-Shirley), according to spokeswoman Katie Vincentz.

But other Republicans contend that the SALT deductions primarily benefit high earners in high-tax and mostly blue states.

The Empire Center for Public Policy, a conservative think tank, concluded that New Yorkers still paid a net 2.4% less in federal income taxes — or $3.3 billion — in 2018 compared with the years before tax reform in part because of the expanded standard deduction and the distribution of rate cuts in the bill.

Under the current tax law, the State Department of Taxation and Finance estimated that New York households will pay an additional $12.3 billion in personal income taxes and the SALT cap could cost taxpayers up to $15 billion annually by 2025 through the loss of economic activity in the state.

"Without the full SALT deduction, the next generation of Long Islanders will struggle to purchase their first homes and others will be driven to relocate out of state," said Kyle Strober, executive director of the Association for a Better Long Island, an advocacy organization.