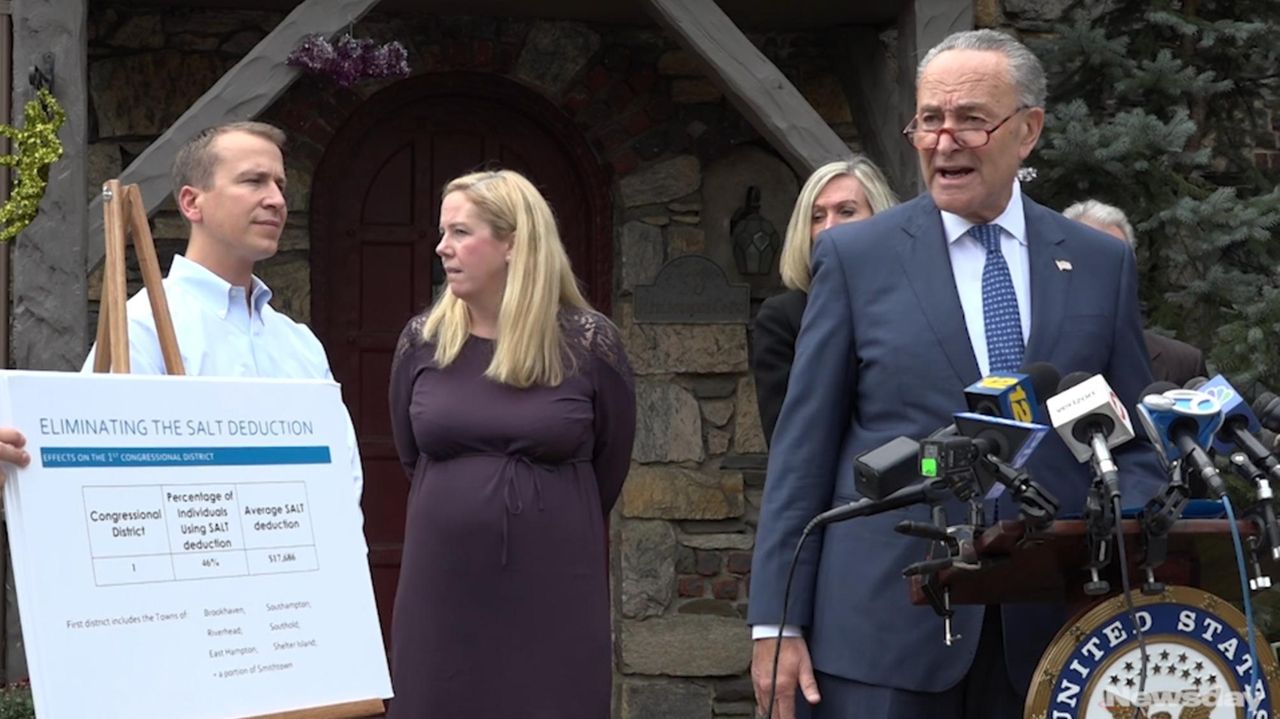 Sen. Chuck Schumer held a news conference at the Rockville Centre home of Maureen and Jeff Orosz on Thursday, Oct. 12, 2017, as he calls for New York representatives to vote against a GOP tax bill that would eliminate state and local tax deductions for homeowners. Credit: Howard Schnapp

Sen. Chuck Schumer stood with a Rockville Centre family Thursday morning and called for New York representatives to vote against a GOP tax bill that would eliminate state and local tax deductions for homeowners.

At a news conference at the home of Maureen and Jeff Orosz, a family that Schumer said depends on the mortgage deduction for their $20,000 in annual property taxes, the Senate minority leader urged all New York representatives to vote against any bill that excludes property-tax deductions.

“It’s a punch in the gut to middle-class families across New York,” Schumer said. “It’s not good enough for representatives to say, ‘I’m against it.’ You can’t vote for any bill that has it.”

Schumer (D-N.Y.) said he is in favor of tax reform, but not tax breaks for the wealthy or measures that hurt the middle class. He said the tax bill would hit Long Island hardest in New York State, costing 47 percent of Long Islanders an average tax deduction of $19,886.

Editorial: LI is a loser under GOP tax reform

King said Thursday that he has met with House Majority Leader Kevin McCarthy (R-Calif.) and Majority Whip Steve Scalise (R-La.) in an attempt to pass a tax-reform bill that includes keeping state and local deductions intact.

“It would decimate the district I represent,” King said. “Most of my constituents are middle-class income people who would be hit very hard because their home is their main asset.”

The White House has not submitted any bill, but King said he was encouraged by a news report that President Donald Trump may consider including the tax deductions after all.

Schumer said he has spoken with the president about keeping the deductions in any tax-reform package.

“I’ve told the president three times if he doesn’t undo this tax reform it will fail. There won’t be enough votes, so maybe it’s sinking in,” Schumer said. “Don’t start your opening plan with such poison pills. It makes it unpopular.”

“This will be a Category 5 disaster for Long Island,” said Laureen Harris, the president of the Association for a Better Long Island, a real estate developer lobbying group. “Hardworking families will suffer greatly and disproportionately.”