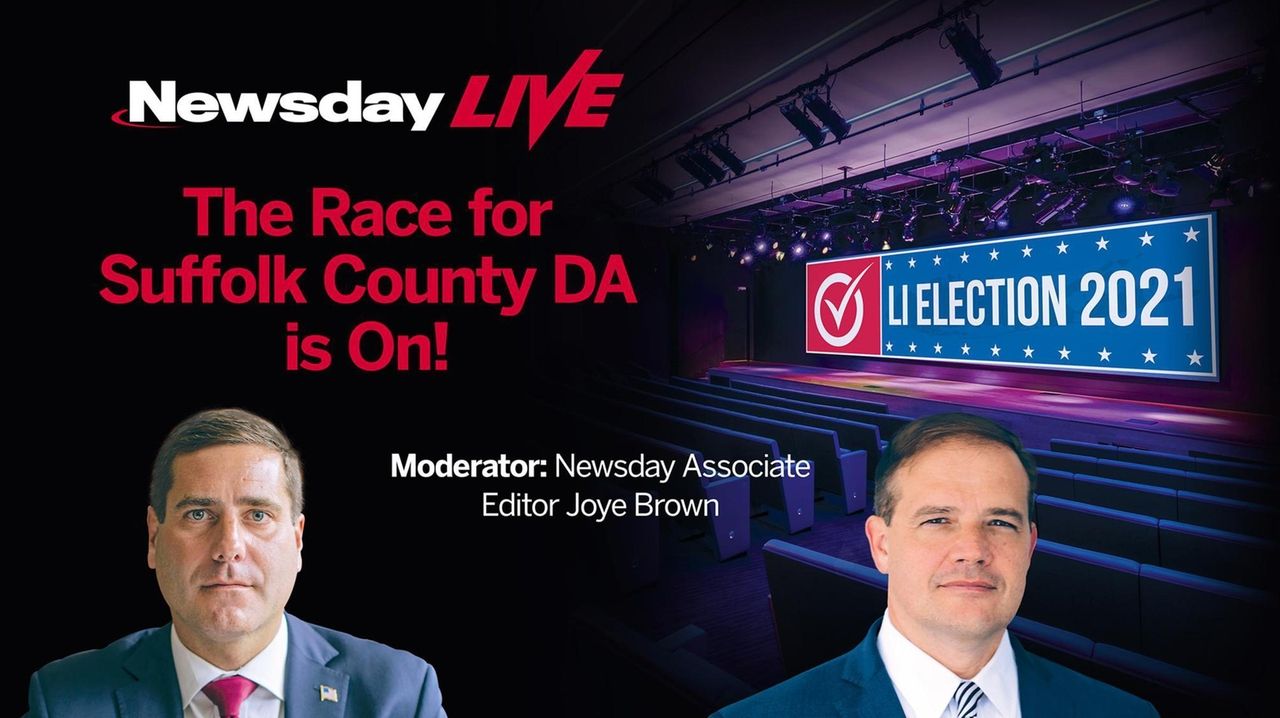 Hear what the candidates running for Suffolk County district attorney had to say as they answered questions from Long Islanders during a Newsday Live virtual town hall event. Credit: Newsday Studio; Howard Schnapp

Sini, a Babylon Democrat, is seeking a second term as Suffolk’s top prosecutor against Tierney, of Holtsville, a former assistant United States Attorney who is running on the Republican and Conservative Party lines.

"There weren't any MS-13 murders in Suffolk County in the last couple years … because we stopped them from happening," Sini said.

Tierney characterized Sini as inexperienced and ineffective, saying jobs were "handed" to him by county Democrats.

"You need ethics and you need experience, and you lack both," Tierney said to Sini.

Sini and Tierney also argued over methods for fighting MS-13 gang violence and diversifying hiring in the district attorney's office in response to questions submitted to Newsday by Suffolk residents.

The event may be viewed at newsdaylive.com, beginning at noon Tuesday.

Sini, 41, served as Suffolk County Police commissioner, deputy Suffolk County executive for public safety under County Executive Steven Bellone and as an assistant United States Attorney in the Criminal Division for the Southern District of New York, where he worked as a trial supervisor.

At the Newsday town hall, Tierney said Sini's office had failed to investigate reports of gunshots in communities including Huntington Station and Wyandanch.

Sini responded: "No one’s pretending that there aren’t major public safety issues not only in Suffolk County but around the country, but this notion that the police department and law enforcement is not investigating shots fired, is just not true, simply not true."

Sini said his office had helped prevent murders by MS-13 members through surveillance.

"We were able to stop murders from happening because we would listen to the planning of murders on the wiretapping," he said.

Both Sini and Tierney criticized new state bail reform laws that eliminate cash bail for most misdemeanors and nonviolent crimes.

Tierney said Sini should have lobbied harder bail reform when the Democrat-controlled state Legislature was considering it in 2019.

"It was your party, you should have been stronger," Tierney said.

Sini said he opposed locking defendants up solely because they couldn't afford to make bail.

But he said he had expressed concern in Albany that the bail package would endanger public safety.

The top county prosecutor in the case resigned and all charges were dismissed against Drayton, who got his job back in 2020.

Tierney said Sini's handling of the case showed his inexperience.

"If you haven't dealt with these countless thorny issues when it comes to ethics, you don't know how to handle them," Tierney said.

Sini conceded the trial, "was not executed well."

He continued: "You're not going to execute every single case perfectly when you're doing thousands of cases each year … We handled it appropriately, we dismissed the case and we fired the individual."

Sini and Tierney also sparred over each other's independence from the political parties.

Sini ridiculed Tierney for working for Suffolk OTB, where political patronage in hiring is common, as it is at OTB's statewide.

"Your whole campaign is bankrolled by political party bosses," Sini said to Tierney. "You currently have a political patronage job at OTB, you're a casino lawyer … We're the law enforcement candidate."

Bellone, a Democrat, nominated Sini as county police commissioner in 2015, calling on him to reform the department after former Chief of Department James Burke was arrested on federal charges of beating a suspect and orchestrating a cover up.

Burke was sentenced to 46 months in prison in 2016 after pleading guilty to federal charges.

"The same cabal who told us that Tom Spota and Jimmy Burke were the greatest law enforcement figures in Suffolk County — they were the same ones who turned around and handed him [Sini] his positions," Tierney said.

Sini said Bellone, after deciding to remove Burke, "asked me to step up and serve as police commissioner, and I'm proud of that."

Sini continued: "And sure you can you can criticize Mr. Bellone for the selection process. But you can't deny then what happened thereafter … We did a good job with the police department. It's not perfect. We didn't have a perfect record. But we accomplished a lot."

Also, in response to a question about the unsolved Gilgo Beach murders, Sini agreed with Tierney that the 911 tape from murder victim Shannan Gilbert should be released to the public, despite his opposition to its release when he served as Suffolk County Police commissioner.

Ray Tierney, Republican and Conservative Party candidate: "It was your party, you should have been stronger," in lobbying Democratic state legislators against the measure.

On whether the Suffolk Police Department should release a recording of Shannan Gilbert's 911 call:

Tierney: "I think perception is reality. So, … you need to be more open and transparent, internally, with regard to that case.

Sini: Your whole campaign is bankrolled by political party bosses -- you currently have a political patronage job at [Suffolk Off Track Betting Corp.] You're a casino lawyer ... We don't take money from political leaders … We're the law enforcement candidate."

Tierney: "I prosecuted political leaders in the Republican, Conservative, and Democratic Party. I made them return the money that they stole from the taxpayers ... And that is what I will continue to do."