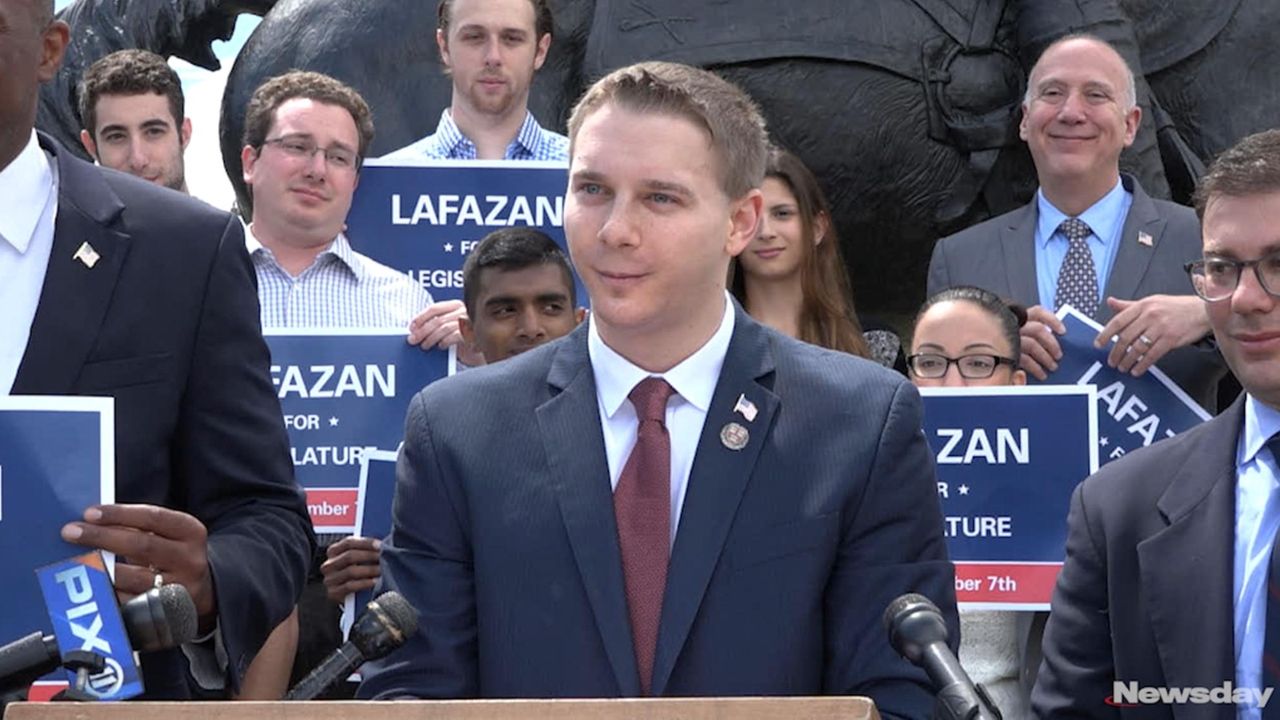 Joshua Lafazan, who in 2012 at the age of 18 became the youngest public office holder in New York State history when he was elected to the Syosset School Board in 2012, kicked off his campaign for the Nassau Legislature on Thursday, June 8, 2017. Lafazan, 23, of Oyster Bay, is running as a Democrat for the 18th District seat held by incumbent Legis. Donald MacKenzie (R-Oyster Bay), and received an endorsement from Legis. Kevan Abrahams (D-Freeport), the legislature's minority leader. Credit: Howard Schnapp

Joshua Lafazan, who in 2012 became the youngest public office holder in state history when he was elected at 18 to the Syosset school board, kicked off his campaign for the Nassau Legislature Thursday, vowing to bring young energy to fight political corruption and restore the county’s fiscal integrity.

Lafazan, a 23-year-old Democrat, launched his campaign for the 18th District seat held by Legis. Donald MacKenzie (R-Oyster Bay) at a news conference at TR Triangle Park in Oyster Bay in front of a bronze statue of President Theodore Roosevelt.

Lafazan noted that Roosevelt, an Oyster Bay resident, in 1881 ran a successful anti-corruption campaign for the New York State Legislature.

“Unfortunately, not much has changed in the 136 years since,” said Lafazan, who was surrounded by Democratic county lawmakers, including Minority Leader Kevan Abrahams (D-Freeport), and his young supporters.

“Corruption still runs deep in Oyster Bay. Nepotism wins out over the needs of our most vulnerable citizens.”

MacKenzie, who is completing his second term in the legislature, is the chair of the Towns, Villages & Cities Committee and has been a vocal advocate for restoring West Shore Road in Mill Neck, which was battered by superstorm Sandy.

“I look forward to a campaign on my record of holding the line on taxes, improving county ethics, and reducing crime,” MacKenzie said in a statement.

Lafazan, who received a master’s degree earlier this year from Harvard University’s Graduate School of Education, has served on the County’s Youth Board since 2013.

Earlier this year, Republican county lawmakers declined to renominate him to the youth board, citing several meetings he had missed because of his college classes.

Lafazan, who has not yet been replaced on the board, contends the move was prompted by his run for the legislature.