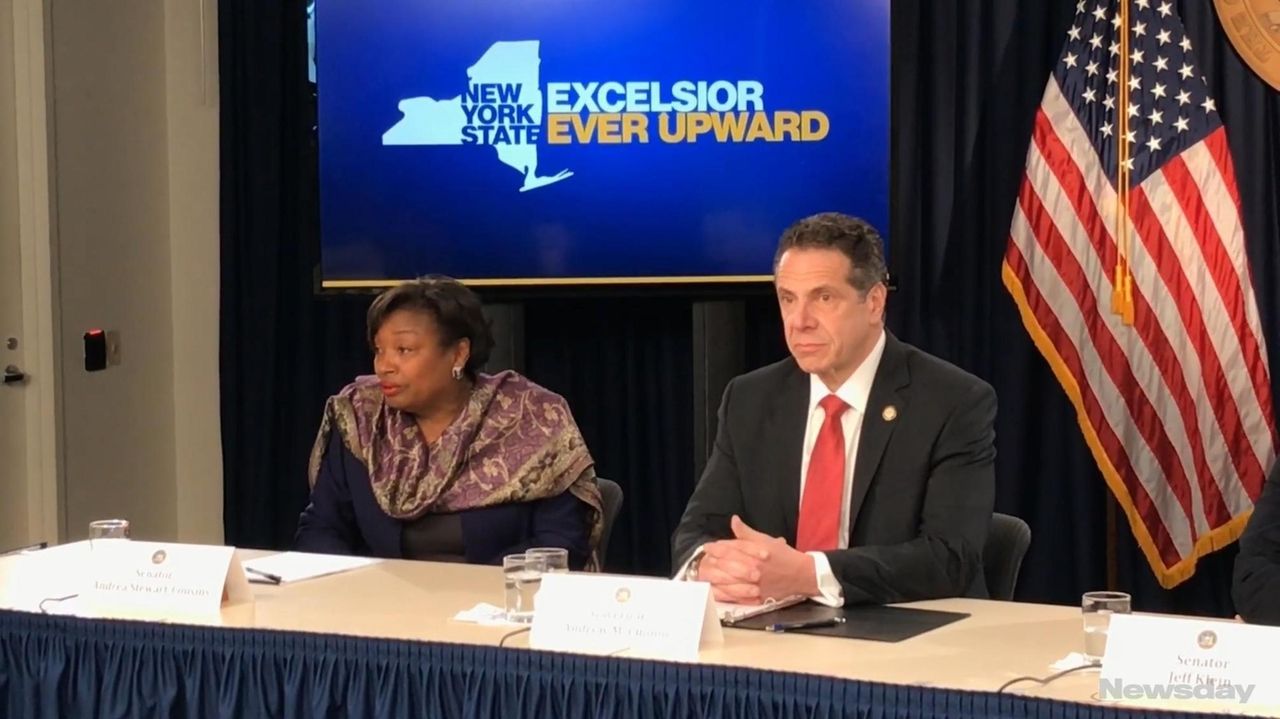 ALBANY — With election pressure building from the political left, New York Democrats on Wednesday ended a seven-year split that has damaged the party in the state Senate and undercut Gov. Andrew M. Cuomo with some liberals.

After years of acrimony, Cuomo and legislators announced the dissolution of the Independent Democratic Conference, a band of Democrats who had enjoyed an atypical power-sharing agreement with Republicans to control the Senate.

The move doesn’t flip control of the chamber for now because the Democrats control just 31 of 63 seats.

But more immediately, it gives Cuomo a chance to stanch criticism from his party’s progressives, who complained that he tacitly supported Republican control, and perhaps prevent a small, yet influential union-backed political party from endorsing his gubernatorial rival, the actress Cynthia Nixon, and turn this year’s election into a three-way race, one analyst said.

“I think the whole analysis of this turns on his avoidance of a three-way race,” Gerald Benjamin, a dean at SUNY New Paltz and a longtime state politics observer, said, referring to the governor.

The issue at hand is a renegade group of party members, eight senators known as the IDC. After initially breaking with mainline Democrats in 2011, they formed an almost unheard of power-sharing agreement with Republicans in 2012 to give the GOP control of the Senate despite then being in the numerical minority.

On Wednesday, the group disbanded and united under the leadership of Senate Minority Leader Andrea Stewart-Cousins (D-Yonkers). Former IDC chief Sen. Jeff Klein (D-Bronx) will serve as her deputy.

The broader issue is this year’s statewide elections.

The governor denied that Nixon’s candidacy — announced just nine days earlier — had anything to do with the timing of the unification, even though he accelerated a time table (announced last year) for doing so. He said it was working together to combat an agenda driven by President Donald Trump and congressional Republicans.

“What we’re saying here today is, we have a common enemy, and the common enemy is defeating Trump . . . and their agenda,” Cuomo said at a news conference at his Manhattan gubernatorial office. “So, we call for Democratic unity for the greater good.”

In contrast, Scott Reif, a spokesman for Senate Majority Leader John Flanagan said: “Let’s be honest — the only reason that any of this is happening now is because Andrew Cuomo is scared to death of Cynthia Nixon.”

The former “Sex and the City” star echoed that notion, writing on Twitter: “For 8 years, Cuomo claimed that he was powerless against the IDC that allowed Republicans to rule the New York State Senate. And then since launching our campaign he — surprise! — found the power . . . ”

Benjamin said also tied it to Nixon’s burgeoning campaign and said Cuomo was attempting to block her from winning the endorsement of the labor-backed Working Families Party. If Nixon wins its support, she would be on the ballot in November even if she loses an expected Democratic primary to Cuomo in September.

The WFP convention is set for May 19, Benjamin noted.

“The crucial thing for him to do is to show the labor union leaders that he is going to be re-elected, have them bring that to the WFP convention and show them that Nixon is a foolish choice,” Benjamin said. “He has to make the conditions for that argument and the sooner the better.”

Cuomo barely secured the Working Families Party’s nomination in 2014 and only after he told its members he would work for Democratic control of the Senate.

On Wednesday, the party issued a statement praising the unification but staying silent on Cuomo. In fact, it said it “believes primaries can be healthy for the Democratic Party and our democracy writ large.”

Marc Molinaro, the Dutchess County executive and the front-runner for the Republican nomination, called the Democratic unification a “cynical deal to protect his own political viability,” referring to the governor.

“Andrew Cuomo will do anything, say anything and sell out anyone to advance his personal ambition,” Molinaro said, noting that Senate Republicans had been Cuomo’s “governing partner” for years before Wednesday.

Even with the Democrats uniting, Republicans would still control 32 seats in the 63-seat chamber — thanks to Sen. Simcha Felder, a Brooklyn Democrat who isn’t an IDC member but who joined the GOP conference.

Felder didn’t reveal where he is leaning now but issued a statement saying he “didn’t care about political parties.”

Cuomo in previous years had called the Democratic divide an “internal legislative matter” that he was powerless to fix, fueling critics on the left who said he’d enabled Senate Republicans and impeded progressive policies.

But the bloc has come under increasingly fierce attacks by the liberal wing of the party, which says the IDC-GOP has stalled passage of a slew of key proposals on immigrants, abortion, bail practices and campaign-finance laws. Several IDC members face potential primaries this September.

Last fall, Cuomo and Democrats announced a complicated plan to bring the warring factions together. But one crucial hinge was the outcome of two special elections on April 24. Now, the plan accelerated in part because of Nixon’s candidacy, one source said.