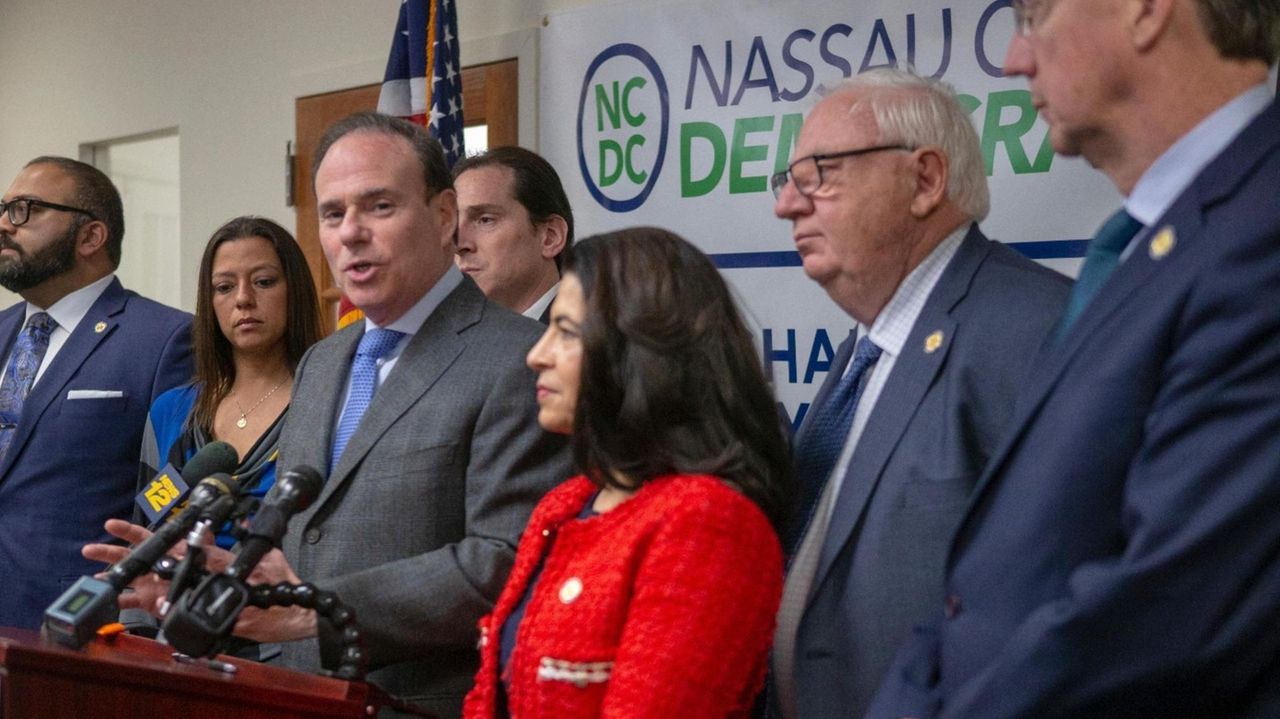 State Senate Democrats from Long Island on Tuesday celebrated passage of a state budget and said Republicans had it wrong when they predicted a Democratic majority would cater to the interests of New York City. At a news conference in Garden City, the six Long Island state senators hailed increased education funding for Nassau and Suffolk school districts and they touted new oversight of the Long Island Rail Road. Credit: Howard Schnapp

State Senate Democrats from Long Island Tuesday celebrated passage of a state budget and said Republicans had it wrong when they predicted a Democratic majority would cater to the interests of New York City.

"For eight years, four election cycles, we heard from our friends on the Republican side that there would be calamity and catastrophe if the New York State Senate went to the Democrats in the majority," Nassau and state Democratic Chairman Jay Jacobs said at a news conference in Garden City.

"All sorts of terrible things would happen, and of course we would be owned lock, stock and barrel by New York City, and so today we come here with less than 100 days from their coming into office, with the results," said Jacobs, who praised the Democratic senators for, "standing up for the suburbs, standing up for Nassau and Suffolk County."

The lawmakers also pointed to increased education funding for Nassau and Suffolk school districts. And they touted new oversight of the Long Island Rail Road, including an independent forensic audit of the railroad and a new standard for on-time performance.

"We're going to account for every penny and ensure greater oversight … [so] that money goes to the railroad, not a bloated bureaucracy," said State Sen. Todd Kaminsky (D-Long Beach).

In the new state budget, funding for Long Island public school operations is slightly more than $3 billion for the 2019-20 academic year, although the increase is the smallest percentage gain in eight years.

Critics also said state legislators did not do enough to expand "foundation" aid, which is New York's main formula for distributing extra money to districts with large numbers of students who are impoverished or non-English speaking.

“Three months into one-party rule of our state government and everything we warned about has come true," said Scott Reif, spokesman for minority Senate Republicans.

"The 100 percent Democrat-made budget raised taxes by billions of dollars, put the rights of criminals and illegal immigrants ahead of the rights of law-abiding citizens, and increased state aid to schools in New York City at Long Island’s expense," Reif said.  "Let’s not mince words here — the Democrats have been a disaster for Long Island.”

Spending rose by $7 billion in the $175.6 billion budget approved early Monday, although state officials cited a $3 billion revenue shortfall from the prior fiscal year.

A Senate proposal to provide a $200 million state tax credit for Nassau homeowners whose taxes are set to rise under reassessment was not included in the final budget. State Sen. Anna Kaplan (D-Great Neck) acknowledged Tuesday that the plan was "not alive."