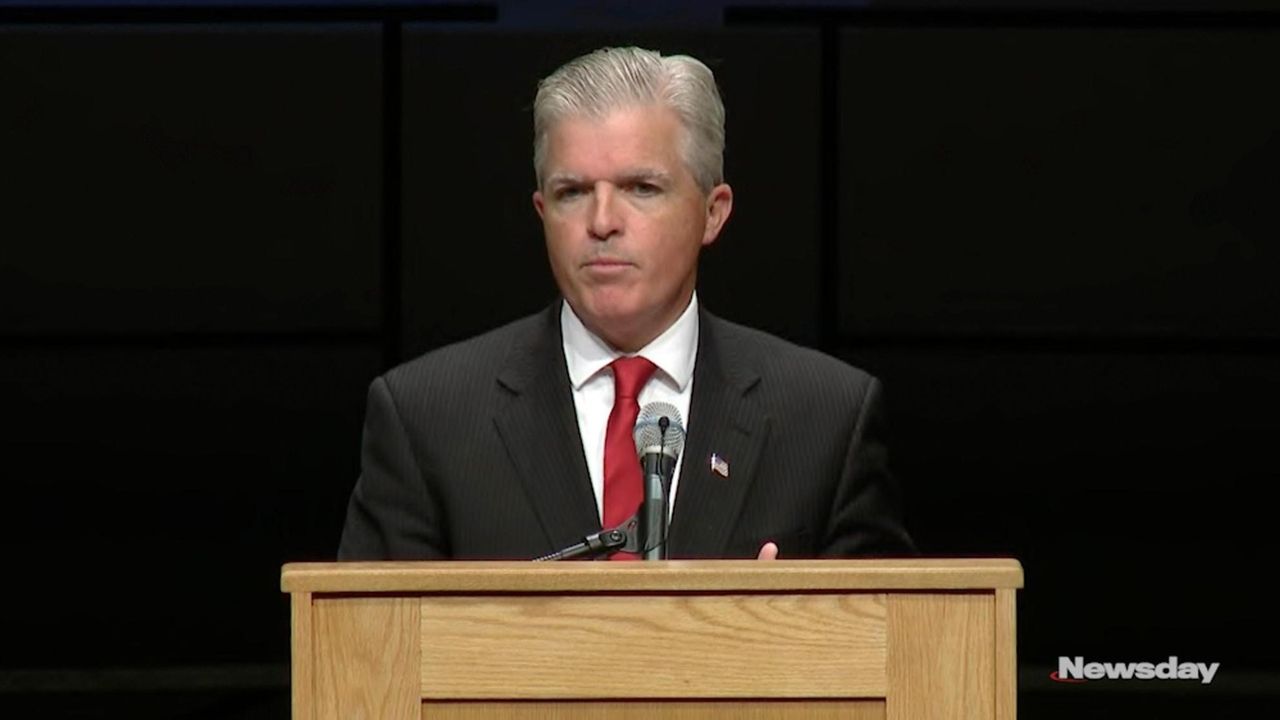 On Wednesday, Suffolk County Executive Steve Bellone gave his annual State of the County address, highlighting accomplishments such as the rollout of the 311 phone service and a new measure to reduce mortgage fees to help compensate for the president's $10,000 cap on state and local tax deductions. Credit: News 12 Long Island

Suffolk County Executive Steve Bellone said in his annual State of the County speech on Wednesday he is creating a 311 system to centralize all calls for county services and complaints that will “go live in 30 days.”

The 311 system will relieve pressure on the overburdened 911 emergency service, which fields some 900,000 calls a year, including tens of thousands of nonemergency calls, Bellone said. It also will allow the county to track calls to deal with taxpayer concerns about problems such as potholes in real time, he said.

Bellone said Suffolk will become the first suburban county in the state to adopt the 311 system.

Bellone said he consulted with Martin O’Malley, a former Baltimore mayor and later Maryland governor. O'Malley's revamp of Baltimore’s 311 call center enabled officials to track citizen complaints and the time it took departments to deliver services, according to a profile of O'Malley, a Democrat, in the Washington Monthly magazine in 2013. Buffalo, Boston and Dallas and New York City also have similar systems.

Bellone, a Democrat who is seeking his third four-year term in November, unveiled his 311 plan in a speech that ran for more than an hour at the Van Nostrand Theater at Suffolk County Community College’s Brentwood campus. Attending were about 500 invited guests, including school superintendents, students and community leaders.

However, Presiding Officer DuWayne Gregory (D-Copiague) said: "I'm a great fan of the idea. It's going to help the county be more responsive to the needs of our constituents."

Deputy County Executive Jon Kaiman, who adopted a 311 system in North Hempstead in 2005 when he was town supervisor, said the new system will cost about $560,000.

Kaiman said the call center will be staffed by county employees who will be moved, plus new workers. Kaiman said he could not be more specific because staffing will be determined by call volume.

In his speech, Bellone also reported the county is on a “slow, steady march” to fiscal recovery. He said for the first time since taking office in 2012, the county this year is not borrowing to pay pension costs, and noted that unemployment is at a record low.

Bellone also cited a new measure to reduce mortgage fees and freeze them for three years to help compensate for President Donald Trump’s $10,000 cap on state and local tax deductions.

He also skewered as an “election year gimmick” Bellone’s $100 rollback of mortgage fees because Bellone raised them from $60 to the current $500. “You’re still going to be paying $340 more than you paid two years ago,” Cilmi said.

Bellone in his speech praised the county police department for its fight against street gangs, noting that the department since 2016 has made nearly 500 gang arrests.

Bellone also said the number of narcotics search warrants is up by 22 percent this year and by 300 percent since 2015.

Bellone also noted that this year the nation is marking the 75th anniversary of the D-Day invasion during World War II.

“The free world owes you and your fellow World War II veterans a debt we can never repay,” said Bellone, who served as a U.S. Army communications specialist.

1:37
'A weight and a blessing,' says daughter who takes over the reins at LI church
Gene Cook's name will appear on ballot, judge rules
Assembly panel will 'soon consider' impeachment articles against Cuomo
Judge: Spota, McPartland face 57 to 71 months under federal sentencing guidelines
Jurors in Thomas Valva case will consider video evidence, judge rules
Cases again near 600 on LI, hospitalizations up, NY figures show
Didn’t find what you were looking for?