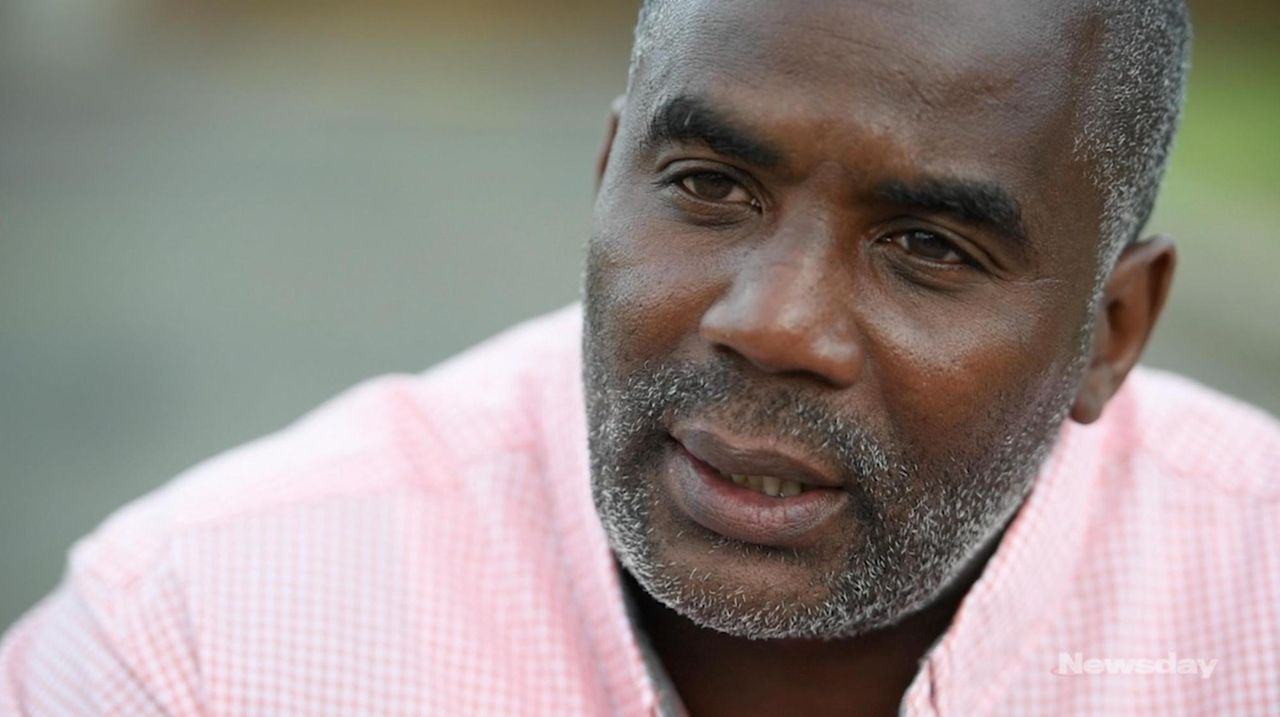 On Tuesday, Michael Robinson of Central Islip talked about his support of a proposal being considered by the Suffolk Legislature to prohibit prospective employers from asking about applicants' criminal histories until a provisional job offer. Robinson, a felon, works for a landscape company. Credit: Newsday / Steve Pfost

Suffolk legislators are set to vote Tuesday on a proposed "ban the box" law that would eliminate a common check box on job applications asking about past criminal convictions.

The measure would bar prospective employers from asking about applicants' criminal history until late in the hiring process, after they have received a conditional job offer. Ex-offenders then would have a chance to explain the circumstances of their convictions and how they have changed.

Backers of the measure say it would give such applicants an opportunity to interview for jobs and explain their crimes, boosting their chances of getting hired and reducing the likelihood of reoffending. They note that state law already prohibits employers from discriminating against people for their criminal history.

“There are people who simply have made mistakes in their lives and they are finding it difficult to get their lives back in order, to get on their feet,” said Presiding Officer DuWayne Gregory (D-Copiague), co-sponsor of the bill with Legis. Samuel Gonzalez (D-Brentwood).

But Legis. Susan Berland (D-Dix Hills) said the bill should permit check boxes for serious crimes or give employers a chance to ask about criminal history earlier in the hiring process. She said it is unfair for employers and applicants to have to go through the lengthy hiring process only to find out at the end that it won’t work out.

“You’re doing more harm to the applicant than if they’re given the opportunity to say their story at the beginning,” Berland said.

If the bill passes, Suffolk would join more than 150 municipalities and 33 states with "ban the box" laws, including New York City. Eight other cities and five counties, not including Nassau, have passed them.

The bill, called "A Local Law to Ensure a Second Chance in Suffolk County," was approved unanimously by the county legislature's education and human services committee May 28. But it still faces some opposition in the full legislature.

Jason Elan, spokesman for Suffolk County Executive Steve Bellone, said the administration was reviewing the measure. Elan declined to say whether Bellone would sign the bill if it passes.

Michael Robinson, who spent four years in prison for a 2013 armed robbery, said the legislation would help ex-offenders such as himself.

After 28 years with a drug addiction, Robinson said he was "grateful" to have been arrested. Robinson, who lives in a sober home in Central Islip, said he got sober, found God again and became a “whole man," in prison.

Robinson, 54, works as a heavy machine operator for a landscaping company and is a reliable employee, his boss said. But Robinson said he knows that as a felon, he was fortunate to get the job.

“My life today is amazing — I can’t even describe it,” Robinson said. “Everybody deserves a second chance to do something incredible.”

He said he has caught some people going back to “their old habits.” But he is happy with Robinson's work.

“We look at it in the aspect of we’d rather them be productive parts of society instead of dregs,” Spangenberg said. “Sometimes all people need is a second chance … ”

About 70 million Americans have been arrested for felonies, according to federal data. Suffolk County is home to about 1,640 parolees, a state Department of Corrections spokesman said.

Advocates for the bill say applicants who check the box are less likely to get an interview, and the opportunity to get to know a candidate could help employers see past a rap sheet.

Employment can play a meaningful role in reducing recidivism, according to the National Institute of Justice, an agency of the U.S. Department of Justice. It also reduces reliance on public money, such as for food stamps, data shows.

Benjetta Milla, a deputy county sheriff in Nassau, said she has seen inmates vow to live better lives when they are released, but then commit another crime because of employment discrimination or the need to make money.

“There’s nothing for me more disappointing than seeing that person come back several months later and say, ‘Well, I couldn’t get a job,’” Milla said at a legislative hearing.

But Suffolk Legis. Robert Trotta (R-Fort Salonga) said the legislation could expose employers to lawsuits if they decide to revoke a conditional offer after learning of an applicant's criminal history.

"While I sympathize with some of these situations, I don't want to infringe on the rights of employers to know who they are hiring," said Trotta, who said he plans to vote against the bill.

Berland also does not plan to support the bill Tuesday. She expressed concern that background checks may not always turn up convictions.

Trotta and Berland suggested the possibility of a compromise that, for instance, would prohibit employers from inquiring about misdemeanor convictions but allow them to ask about convictions for violent crimes.

Elizabeth Justesen, an attorney who helps ex-offenders get jobs through the Breaking Barriers project of the Suffolk Legal Aid Society and Touro Law School, said employers wouldn't have to go through with hiring people whose crimes relate to the job.

Some studies also show that ban the box laws unintentionally may exacerbate racial discrimination as employers try to weed out candidates they assume may have a criminal record.

In a study in which 15,000 fictitious job applications were sent to employers, researchers from Rutgers University and the University of Michigan found that after ban the box policies were implemented, the gap between white and black applicants who got job callbacks grew from 7 to 45 percent.