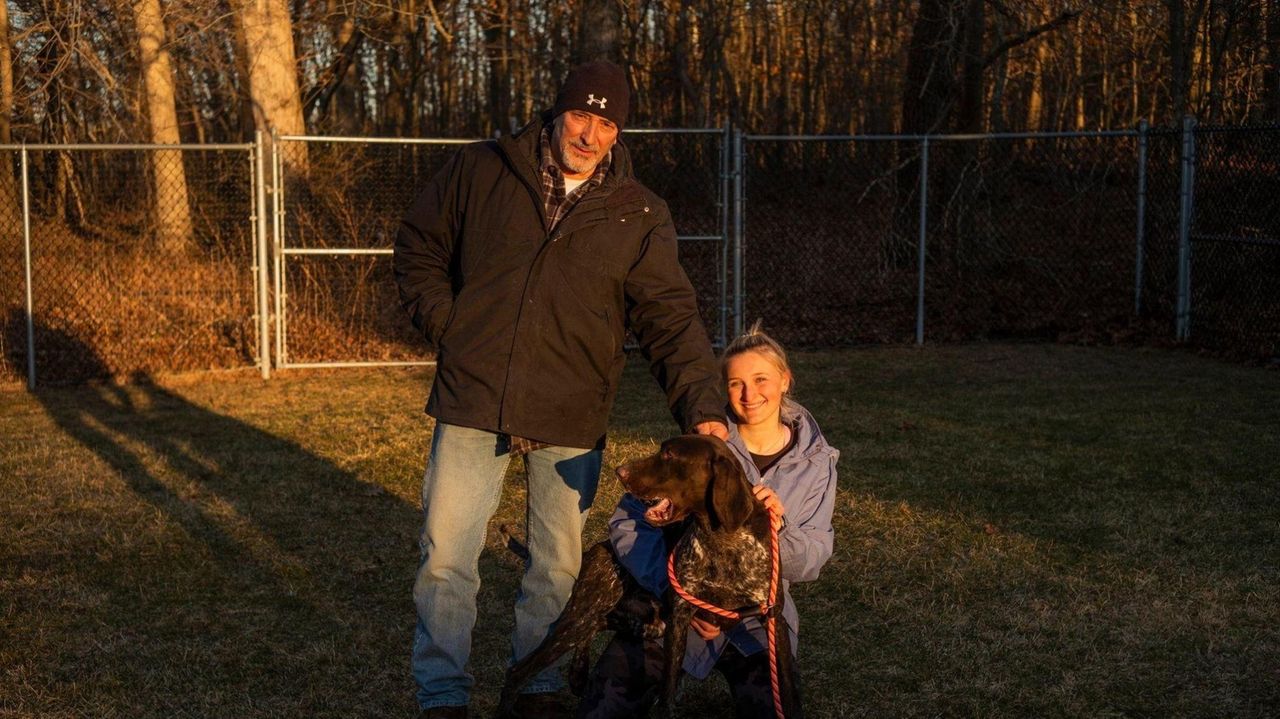 The owner of Long Island K-9 Services, James Greco, spoke to Newsday on Tuesday about Cuda, a Suffolk County Sheriff’s K-9 dog relieved of duty after biting his handler soon after joining the force, making him a liability on the job. Now, the 2-year-old German shorthaired pointer has a forever home after the Suffolk County Legislature voted Tuesday to transfer him permanently to Long Island K-9 Service in Manorville. Credit: Newsday / Reece T. Williams

Cuda, a Suffolk County Sheriff’s K-9 dog, was relieved of duty after biting his handler soon after joining the force, making him a liability on the job.

Cuda, who has undergone weekly obedience training and is no longer a risk, according to Greco, will be a pet to his family of four while also working as a drug-sniffing dog.

"My family fell in love with him," said Greco, a retired Nassau County sheriff’s department officer. "He’s a sweetheart, [a] harmless dog. We love him to death."

Greco referred variously to the 70-pound dog as a "mush" and a "goofball" who "thinks he’s a chihuahua."

Cuda was brought into the Suffolk sheriff's office to detect drugs at correction facilities in Riverhead and Yaphank, officials said. Two other dogs sniff for drugs at the jails and three patrol with deputy sheriffs, sheriff's Chief Michael Sharkey said.

Cuda was sent to Long Island K-9 Service about 8 months ago after biting his handler without causing significant injury, officials said.

Dogs cannot remain in service if they bite handlers, Sharkey said, because the county could face liability if they bite again.

Greco said he has a 2.1-acre property and houses state trooper and Suffolk sheriff dogs while their handlers are away.

His family bonded with Cuda and became "inseparable," so they fought to keep the dog. Cuda also got along with the family’s seven other seven dogs, which Long Island K-9 Service hires out to sniff out narcotics, weapons and explosives.

"They have a party, and he died and went to heaven, trust me," Greco said of Cuda's relationship with his other dogs.

The county legislature was able to transfer Cuda after the sheriff's office deemed him "surplus" under county protocol, Sharkey said.

Most dogs leave the K-9 service in retirement and spend the rest of their lives at home with their handlers, Sharkey said.

In the past 30 years, one was returned to its training company for biting its handler, and another was put down after its handler suffered more substantial injury, Sharkey said.

The sheriff’s department began its K-9 program in the 1970s after 21 inmates had escaped from the Riverhead jail over a 15-year period, officials said in 2019, when the sheriff’s office unveiled a memorial to K-9 dogs that had died.