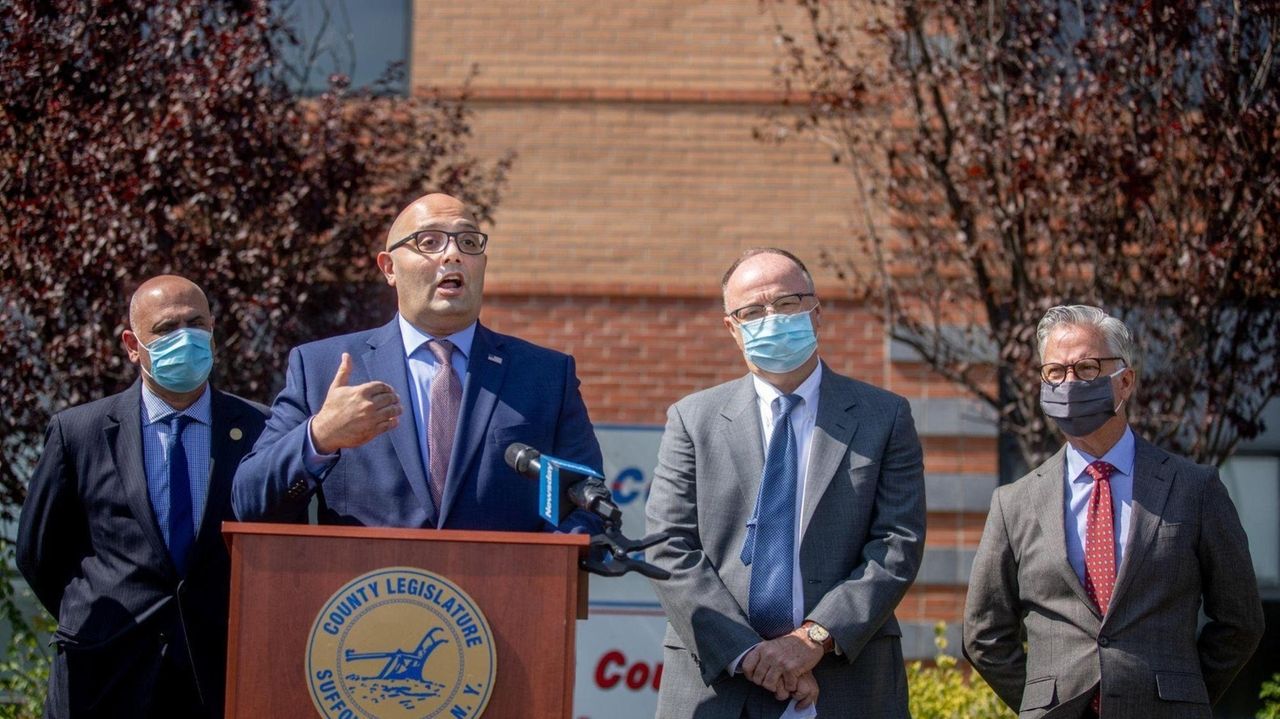 Suffolk County Republican lawmakers on Tuesday denounced County Executive Steve Bellone’s warning that he will cut $20 million from the police department next year unless more federal aid arrives, saying the county should not "defund" the police to fix a budget crisis.

Republicans said Suffolk was in poor fiscal condition before the coronavirus pandemic, and Bellone should not blame the lack of additional federal funding for proposed police budget cuts.

"We need help from the federal government, but the first reaction should not be to defund the police," Legis. Kevin McCaffrey (R-Lindenhurst) said outside the Suffolk Police Academy in Brentwood. "We should be defending the police."

Bellone said Friday he was planning to cut police academy funding and school resource officer positions from the police department’s $530 million budget next year if the federal government does not provide more pandemic relief.

The county has received $283 million in CARES Act funding, including $26 million specifically for public transit, but still faces an $800 million deficit in 2020 and 2021, according to a fiscal impact panel assembled by Bellone.

The GOP lawmakers did not specify how they would prevent cuts to the police department.

They called on Bellone to meet with them and detail how the county has spent the federal CARES Act money it already has received. Without that information, legislators won't know where they can find other county funds to avoid police cuts, McCaffrey said.

For instance, if some departments have excess funds due to receipt of CARES money, a portion of their budgets could be transferred to departments that have been depleted, McCaffrey said.

The county has used about $107 million in CARES Act funding so far, the Legislature's Budget Review Office said earlier this month.

Bellone administration officials have said the county has allocated all the federal money, but has declined to detail how the money it is being spent.

Bellone dismissed Republicans’ criticism Tuesday, saying COVID-19 has hurt the finances of many local governments and that without more aid, the funding burden could fall on county taxpayers.

"This is not fake," Bellone said at a news conference. "We need to do everything we can to protect local taxpayers, first responders and essential employees who rely on these resources."

Bellone has said without more federal money he will have to eliminate two classes at the Police Academy totaling 200 new officers, effectively shuttering the academy.

He said he would reassign officers in the school resource program to patrol jobs that new hires would have filled.

The prospective cuts are not expected to affect police salaries, which are guaranteed in union contracts, officials said. Police pay is expected to average $177,563 this year including salaries and monetary benefits such as overtime, longevity and holiday pay, according to the county Legislature’s Budget Review Office.

"If the county was run properly that would finance the entire police department," Trotta (R-Fort Salonga) said.

Trotta also said the county should use CARES funding where possible to avoid police department cuts, saying it can go toward payroll expenses for public safety employees and in departments that provided coronavirus response.

Municipalities cannot use CARES Act money to plug budget holes caused by losses of revenues such as sales taxes, according to Treasury Department guidance. But the funding can be used for payroll costs of public safety employees and expenses of other departments directly related to COVID-19 response efforts.

He noted that the county has lost only $100 million in sales tax revenue so far this year compared to last year at this time, which is less than it received in CARES Act money.

Noel DiGerolamo, president of the Suffolk Police Benevolent Association, said he was "cognitive of the fiscal impact this pandemic has had," but optimistic the federal government will provide more relief.

"Any cut in services causes concern, but I believe working together, we will ensure the appropriate relief is obtained and residents will continue to receive the highest level of service from the greatest police department in the nation," DiGerolamo said.