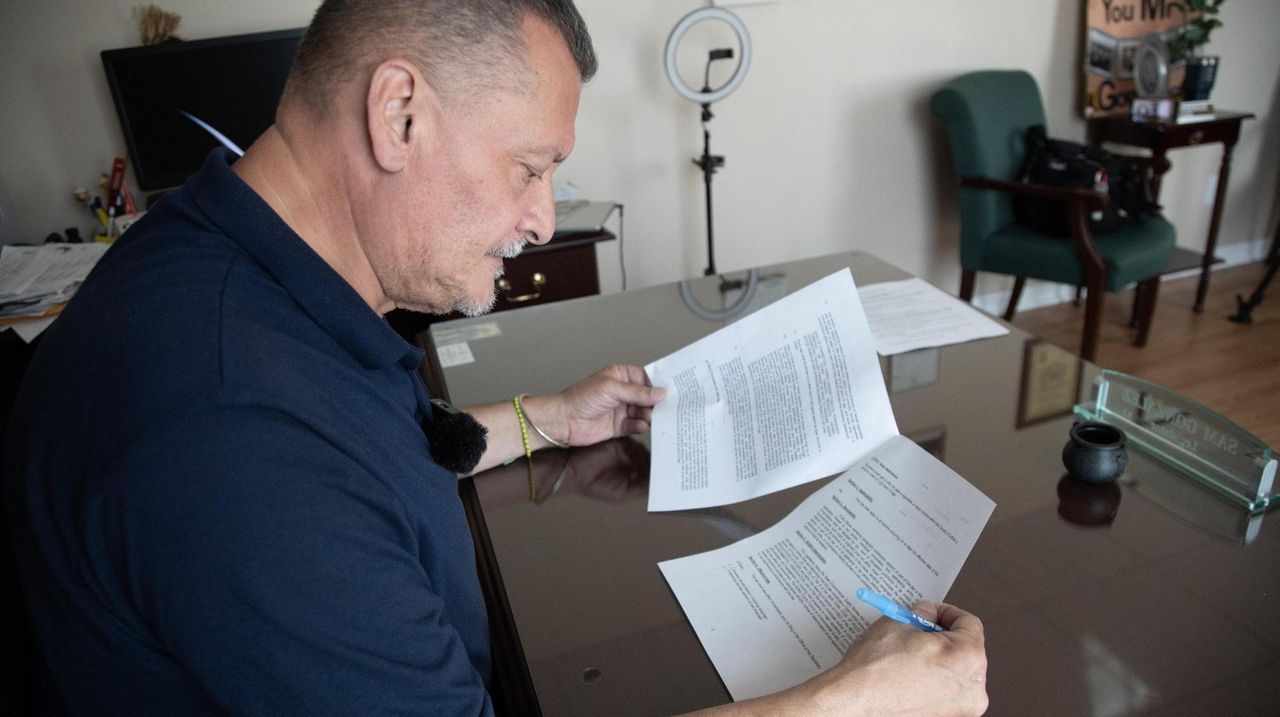 Legis. Samuel Gonzalez (D-Brentwood) on Thursday spoke about a proposed Suffolk County bill he is sponsoring that would raise the legal smoking age from 21 to 25. Credit: Kandall Rodriguez

A proposed Suffolk County bill would raise the legal smoking age from 21 to 25, potentially instituting the highest age limit in the nation.

The bill, which will be the subject of a public hearing in the county Legislature Tuesday, would restrict the sale of cigarettes, vaping products, cigars, rolling papers and other tobacco products to people age 25 and over in Suffolk.

Legis. Samuel Gonzalez (D-Brentwood), the bill’s sponsor and a former smoker, said he wants to prevent people from picking up the habit.

Cigarette smoking is responsible for more than 480,000 deaths in the United States each year, including 41,000 from secondhand smoke exposure, according to the federal Centers for Disease Control and Prevention.

"My hope is that if you haven’t smoked by 25, chances are you’re just not going to start," Gonzalez said.

But legislators, retailers and health experts questioned whether raising the age limit is the most effective way to battle tobacco use. They noted that most people start smoking before they're 21, also the legal age to drink in New York.

"The challenge [the bill] has is, at what point in time are people old enough to make decisions, even bad ones, for themselves?" Presiding Officer Robert Calarco (D-Patchogue) asked.

Suffolk County raised the smoking age from 19 to 21 in 2015 in legislation that sponsor Legis. William Spencer (D-Centerport) noted took over a year to pass.

The American Lung Association is not aware of any places in the United States with a smoking age over 21, association executive Michael Seilback said.

A smoking age of up to 25 proposed by one Australian state in 2015 would have been among the highest in the world, according to news media reports at the time. The bill's sponsor later withdrew the measure, citing a lack of support from other officials who expressed concern it would create a larger black market for tobacco, according to The Canberra Times newspaper.

A proposal to raise the age to 25 statewide in Hawaii failed this year after missing a key procedural deadline early this year.

In the United States, about 90% of people who start smoking do so before age 18, and 99% of smokers have begun by age 26, according to the CDC.

Gonzalez, 59, president of the IBEW Local 1430 union based in Westchester County, smoked two packs of cigarettes a day from about ages 14 to 31. He said studies show age 25 is when the brain is fully developed, giving people the ability to make better decisions.

But many see age 21 as mature enough to decide to smoke.

"There’s no debate about smoking’s health risks," Minority Leader Tom Cilmi (R-Bay Shore) said. "There’s also no debate when people are 21 years or older, they should be able to make their own decisions."

A 2015 study by the Institute of Medicine of the National Academies found people are less likely to start smoking if they haven’t picked up by age 25.

The study found that raising the smoking age from 18 to 21 would have significant health benefits, raising it to 25 would have minimal added impact.

Norman Edelman, a pulmonologist and Internal Medicine professor at Stony Brook University, expressed skepticism Gonzalez's proposal would be effective, comparing it to telling people over age 75 they can’t drive. Raising taxes is a more effective way to fight tobacco use, Edelman he said.

"The more expensive you make cigarettes, the less they’re used," he said.

Unlike New York City, Nassau and Suffolk Counties do not levy their own tobacco taxes. An average pack costs around $13 on Long Island and up to $18 in the city, said Aegina Angeliades, co-owner of The Barn, a chain of drive-thru convenience stores.

Seilback, of the American Lung Association, said the group has not taken a position on Gonzalez's bill but is focused on initiatives to raise tobacco taxes and expand bans on flavored vaping products.

"We’re always happy to see legislators pushing the envelope," said Seilback, the association's national assistant vice president for state public policy. "But there are initiatives we put ahead of Tobacco 25."

Angeliades, whose chain has 24 stores on Long Island, said raising the age to 25 in Suffolk merely would send customers out of the county.

"If you think people are not going to smoke because they can’t buy in Suffolk, they’ll drive to Nassau," Angeliades said.

Gonzalez said he expects backlash but vowed to fight to get his bill passed.

"Maybe I can save a life or two," Gonzalez said. "I don’t want people to continue dying unnecessarily for a bad habit."

Gonzalez’s bill would not apply to American Indian reservations, such as the Shinnecock Indian Nation's in Southampton.

Taobi Silva, manager of the Shinnecock Smoke Shop, said the bill should include religious exemptions for Native Americans, who use tobacco as a sacrament in prayer and who may need to purchase it elsewhere in the county.