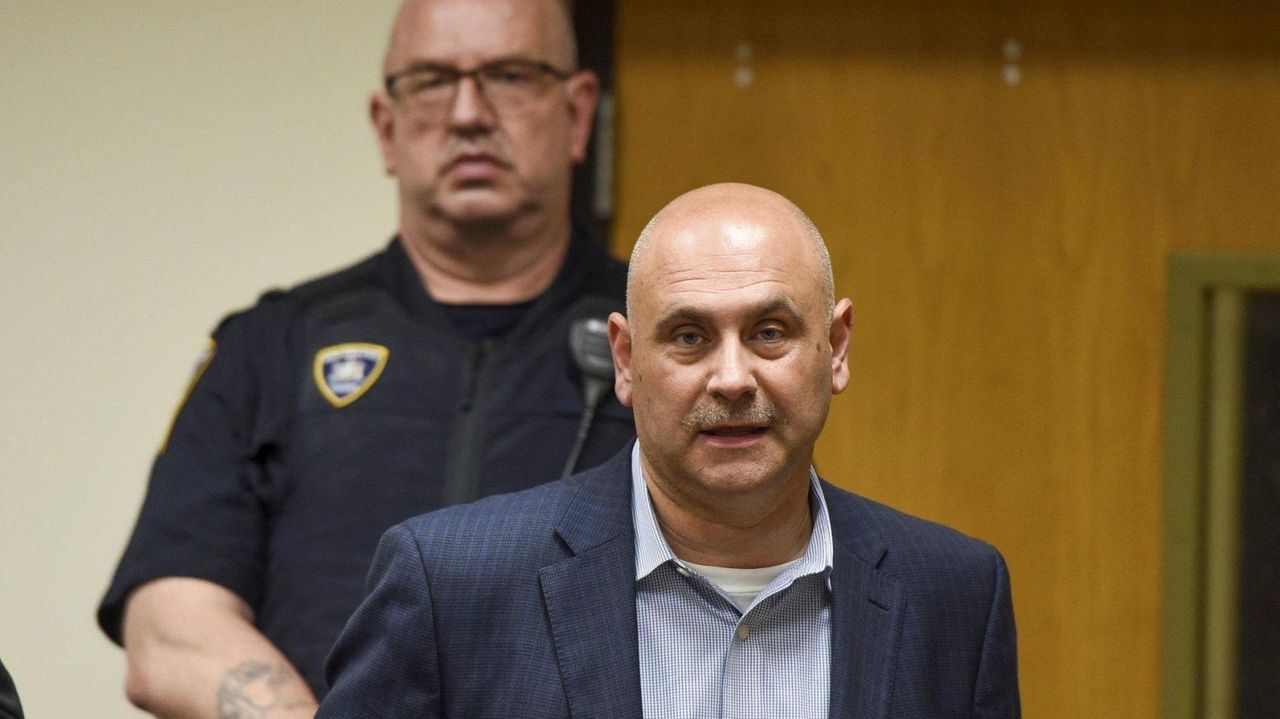 Suffolk Legis. Rudy Sunderman (R-Shirley) continued to work as a Centereach Fire District official even after an ethics board told him he would have to quit that position when he became a lawmaker, prosecutors said Tuesday after unsealing a nine-count indictment that charges him with perjury and other criminal charges.

Sunderman created a shell company in the name of his wife, Laura Sunderman, so he could continue receiving income from the fire district, District Attorney Timothy Sini said after Sunderman was arraigned in Suffolk County Court in Riverhead. Sunderman then lied, Sini said, when the County Board of Ethics questioned him about his ties to the fire district.

“He is literally signing his own checks after he is told that engaging in that employment was illegal,” Sini said during a news conference.

Sunderman, 49, vowed to fight the charges in a brief but fiery statement to reporters after he was arraigned.

“These alleged allegations are untrue and nothing but a political attack on my career, so frivolous it is unbelievable,” Sunderman said before leaving the courthouse to attend a legislative meeting.

County Court Judge Anthony Senft ordered Sunderman to be released on his own recognizance and to return to court on Aug. 13. His attorney, Ray Perini of Islandia, said in court that Sunderman was not guilty of the charges.

Perini called the veteran firefighter “a hero, not a criminal.”

Sunderman’s colleagues in the legislature expressed shock after the indictment was unsealed Tuesday. Legis. Tom Donnelly (D-Deer Park), a fellow firefighter, called Sunderman "one of the most honorable people I know and when all is said and done he will be cleared."

The indictment charges Sunderman with five counts of first-degree perjury, filing a false instrument in the second-degree — prosecutors said he had lied on a financial disclosure form — and other charges. It also alleges that he violated a 2001 Suffolk law that bars county elected officials from holding another paid position with the county or any department, office, commission, board, agency or public benefit corporation at the village, town, state or federal level. The law's exceptions are for a teacher in a public school district or a professor at a public college or university.

Sunderman asked the County Board of Ethics if he would be allowed to keep his $175,000-a-year fire district manager job shortly after he won his race for his legislative seat in November 2017. The ethics board issued an opinion in December 2017 that said Sunderman would violate the county law if he continued as fire district manager.  Sunderman said at the time that he would abide by the board’s opinion.

Sunderman gave up another job, a $22,500-a-year position with the Center Moriches Fire Department, but created the shell company so he could continue to receive income from the Centereach district, Sini said. Sunderman earns $102,639 as a legislator.

“In January 2018, on the very same day that Legislator Sunderman was taking his oath of office for the Suffolk County legislature, the Centereach Board of Fire commissioners voted to hire Sunderman’s shell company, which is called Now That’s Fire Management Inc., at a rate of $10,000 per month, despite the law prohibiting him from doing so.” Sini said.

Sini said Now That’s Fire Management received $60,000 from the district between January and June 2018. He signed the vouchers that authorized payments to the company, Sini said, and shut down his side business after the ethics board began an investigation.

Perini said the prosecution is politically motivated and based on “nitpicking.” He said Sunderman had found a way to get around the county law barring elected officials from working for other government entities but has not violated the statute.

Perini and Sunderman both called for a speedy trial so the lawmaker could clear his name as soon as possible.

After a public hearing on red-light cameras in the county legislature Tuesday, Sunderman said he was innocent of the charges and vowed to fight them. He   was arraigned Tuesday morning and missed the first part of the legislative meeting, but was in his seat once the afternoon session began.

“That’s why I was here immediately, doing the work for the people of the 3rd Legislative District,” Sunderman said.

Some county legislators and aides stood and applauded him.

“Rudy is a hero first responder who has always put the needs of others ahead of his own,” Suffolk County Republican Party chairman Jesse Garcia said. “I am confident that Rudy Sunderman, a three-time volunteer firefighter of the year, will be exonerated and found innocent.”