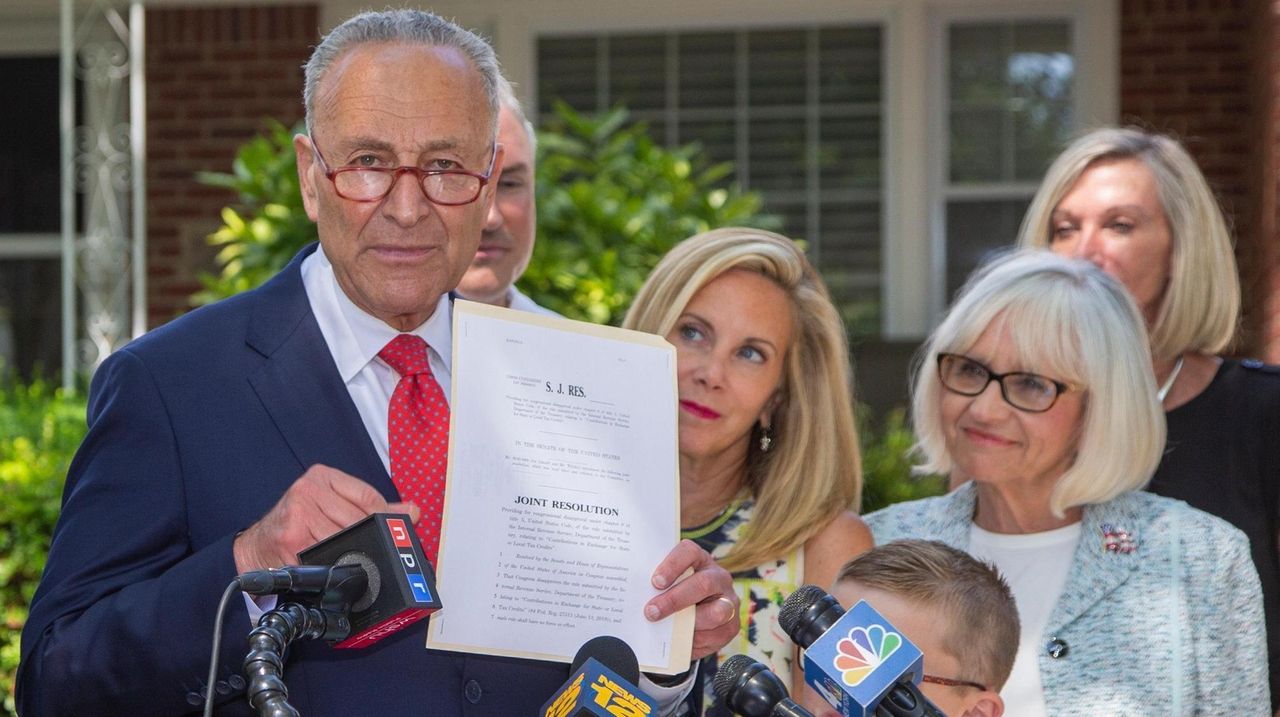 Senate Minority Leader Chuck Schumer is renewing his push to restore the thousands of dollars in state and local property tax deductions that Long Islanders lost in the Trump tax overhaul.

On Monday, in front of a home in Floral Park, Schumer (D-N.Y.) laid out his intention to overturn new IRS regulations that strictly limit how much New Yorkers can deduct for their contributions to a state charitable fund, which lawmakers in Albany established as a workaround to President Donald Trump's signature legislation.

"Taking away a good chunk of the SALT deduction was brutally unfair to Long Island homeowners. It hit them right between the eyes," said Schumer, standing with Nassau County's three town supervisors — Laura Gillen of Hempstead, Joseph Saladino of Oyster Bay and Judi Bosworth of North Hempstead.

The Trump tax law, the Tax Cuts and Jobs Act of 2017, put a $10,000 ceiling on the state and local tax deduction — a big hit for high-tax states like New York. In response, lawmakers in Albany passed a measure that let homeowners pay their property taxes in the form of charitable contributions and take the federal charitable tax deduction on 95 percent of their payments.

Dennis and Holly McPhillips own the home in Floral Park. The couple purchased the Orchid Street property seven years ago and pay roughly $18,000 a year in state and local taxes.

The SALT cap has forced the McPhillipses to rethink their family vacations.

"We definitely feel it," said Dennis McPhillips, who works in leadership development at Montefiore Health System in the Bronx. "We've had to scale back."

In June, the IRS issued final regulations on state workarounds that will require taxpayers to reduce their federal charitable contribution deduction by the amount of any state or local tax credits they receive. The regulations go into effect Aug. 27 and apply retroactively to contributions made after Aug. 27, 2018.

In New York, for example, taxpayers who make a $1,000 contribution could deduct only 5%, or $50, on their federal returns, tax experts have said.

Under the bill that Schumer expects to introduce Tuesday, lawmakers would be allowed to review and potentially nullify any rule that a federal agency issues by using a legislative tool called a Congressional Review Act Resolution of Disapproval.

Passage of the measure requires a simple majority of lawmakers, and Republicans, who control the Senate, can't block Democrats from bringing the bill to the floor for a vote, Schumer said.

Congress would need to pass the bill within 60 legislative days of the IRS regulations,

The IRS and a spokesman for Senate Majority Leader Mitch McConnell (R-Ky.) did not respond to a request for comment on Schumer's bill.

The Suffolk County Legislature passed a measure similar to the state law in April. But county officials, who were planning to set up the charitable fund in time for the 2020 tax year, backed off their effort after the IRS rolled out the regulations.

The county is considering legal action to strike down the IRS regulations along with a group of New York municipalities called the Coalition for the Charitable Contribution Deduction.

Gillen described the SALT cap workaround as "critical for the survival" of Long Island's middle class.

"The elimination of the SALT deduction is a slap in the face and a punch in the gut that will have devastating impacts on the local housing market that will then trickle down to every facet of our local economy," Gillen said.

Many middle-class and working families as well as corporations received a tax cut under the Trump tax law. The SALT cap helped pay for the corporate tax cut, according to tax policy experts.

The $10,000 ceiling affects nearly 700,000 homeowners across Long Island who exceed it, with the average SALT in many parts of the region exceeding $20,000, according to data from the National Association of Counties.

"Our residents must be able to deduct their taxes on their federal return," Saladino said. "It's too much of a burden otherwise."

Lawmakers also cited the imbalance in what New Yorkers send to Washington and what they get back in return.

New York State received an estimated back 90 cents in federal spending for every dollar it sent to Washington in fiscal 2017, one of the biggest imbalances in payments between the states and the federal government, according to an October 2018 report by state Comptroller Thomas DiNapoli.

"This is an economic assault on our communities from the north shore to the south," she said. "Homeowners here have a much higher cost of living than other parts of the country."

Effect of the SALT cap, by congressional district