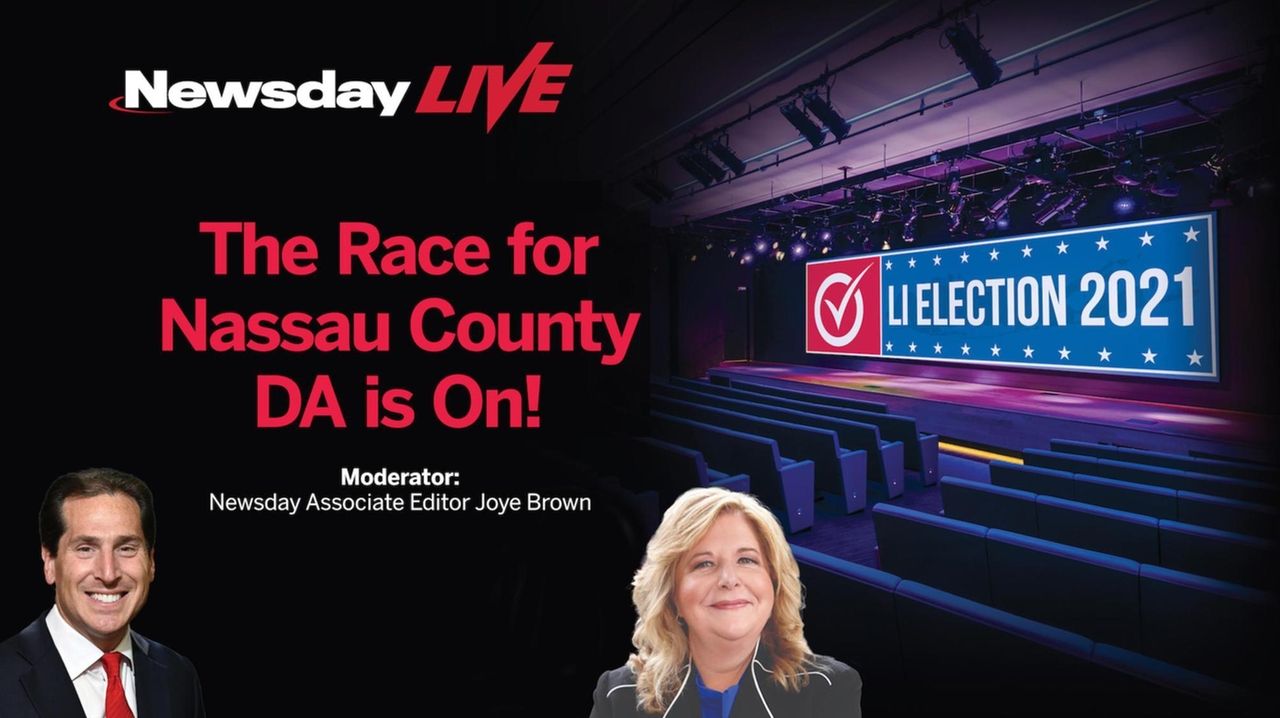 Hear what the candidates running for Nassau County district attorney had to say as they answered questions from Long Islanders during a Newsday Live virtual town hall event. Credit: Newsday Studio

Democrat Todd Kaminsky and Republican Anne Donnelly, both vying for the job of Nassau County District Attorney, sparred over the state’s 2019 bail reform law while attacking each other’s integrity in a Newsday Live Town Hall.

Kaminsky, a state senator from Long Beach and a former federal prosecutor, and Donnelly, a 32-year prosecutor in the Nassau district attorney’s office, are running to replace former District Attorney Madeline Singas, a Democrat who resigned this year to become an associate judge on the State Court of Appeals.

The winner of the Nov. 2 election will serve a four-year term.

Bail reform, enacted in 2020, eliminated cash bail for most misdemeanors and nonviolent crimes. The measure was part of the state budget, which Kaminsky voted for.

After bail reform took effect, Kaminsky helped develop legislation that restored judges' powers to decide whether defendants should be held in custody because they pose a risk to public safety.

"I will continue to fight the left in my own party when that means keeping you safe, and your safety will always be my top priority" Kaminsky, 43, said of Nassau County residents.

"It’s interesting that my opponent says he will continue to make changes when he supported and voted for the original bail law as it was written," said Donnelly, 57, of Garden City.

The event may be viewed at newsdaylive.com.

Both candidates touted their experience as prosecutors.

Donnelly focused on her institutional knowledge of the district attorney’s office and her relationships with county law enforcement agencies.

Kaminsky spent six years as a prosecutor in the U.S. Attorney’s Office for the Eastern District of New York, and is serving his fourth term in the State Senate.

Donnelly most recently served as deputy chief of the Rackets and Enterprise Crime Bureau. She left the office to run for district attorney.

Donnelly said, if elected, she would devote more resources to the district attorney's office bias crimes unit, and appoint leaders from various minority communities to an advisory panel on the issue.

He said he also wanted to fund more educational programs to teach young people about racial and religious bias. For instance, Kaminsky praised a district attorney program that brings young offenders to the Holocaust Memorial & Tolerance Center in Glen Cove.

Both Kaminsky and Donnelly called cybercrime a significant threat that endangers children and the elderly.

Donnelly said the district attorney’s office needs to put more funding into fighting technology crimes, "because it is something that is affecting every person now."

Kaminsky said he would create a bureau to attack cybercrime and also would work with federal law enforcement on the issue.

"Those are my friends; those agents are the people I worked with and made big cases with," Kaminsky said.

The town hall discussion between Donnelly and Kaminsky became the most heated during exchanges over bail reform.

Kaminsky, who sat on the legislative committee that reported the bail bill to the full Senate, defended his record on the issue and accused Donnelly of misrepresenting his involvement with the bill.

"She continually says every single day that I wrote the bail law … that is absolutely false," Kaminsky said.

In response, Donnelly quoted from a video that she said showed Sen. Michael Gianaris (D-Astoria), speaking after the bail reform legislation had passed, thanking Kaminsky for putting "pen to paper to get this bail law done."

Donnelly said, "I’m an intelligent, educated woman. Pen to paper to me means you helped write it."

She continued: "I have been a prosecutor for 32 years in Nassau County. I have nothing but the utmost integrity and sanctity for our court and our judicial system.

The candidates also argued about changes to state discovery law, which governs when prosecutors must turn over evidence to defense attorneys.

Discovery legislation was part of the bail reform package that passed in the state budget.

Kaminsky touted his role in the Senate in subsequently amending the law with a provision for an automatic protective order prohibiting disclosure of identifying information about crime victims.

Donnelly blamed the original disclosure measure for requiring victims' information to be disclosed, and said Kaminsky's amendments did not go far enough to fix the problem.

Kaminsky responded: "The law specifically — specifically — gives protective order in gang cases. That’s the law. Either you don’t know the law or you’re being dishonest."

Kaminsky continued: " … The fact that she doesn’t know that is super troubling."

"I know the law. And I know what you did wasn’t enough," Donnelly shot back.

" … In an assault case to have to give over the victim’s name and number — it’s just mind boggling," she said.

Correction: The winner of the Nassau County district attorney's race will serve a four-year term. A previous version of this story misstated the length of the term.

Todd Kaminsky, Democrat: “I really prefer a federal system … that doesn’t involve cash at all. In the federal system, whether you are rich or poor if you can be proven to be someone who is going to be a danger to the public and go out and hurt somebody or continue your crime, you stay in,” custody. “And if you’re not, whether you have money or no money you sign a personal recognizance bond and you’re out.”

Kaminsky: “There is no doubt we need to have more victim-centered justice. The family justice center that the DA’s office is a really important part of that, where you’re not just talking in a police precinct but you have all the different people you might need — from counselors, different medical professionals, prosecutors — all in one place to make it holistic. People need to feel like they’ll be believed.”

Donnelly: "Women, especially, can be mentally abused in domestic cases and we need to have the right people there. I was there; I held the hand of a violent rape victim and talked to her about what had happened. We need to be able to do that — to have the right person there, maybe a professional medical, psychologist, psychiatrist, speak to this person and get them the help they need as soon as possible."

Donnelly: “I am a mom and my oldest is a boy with special needs. You have to look at the circumstances surrounding the whole person and see what help we can give them before we just say you belong in jail or you belong in a program. Before the changes in the bail law, we used to be able to have someone held overnight and say to the judge the next day ‘This person needs to be examined.’”

Kaminsky: "I think the DA could really use his or her bully pulpit to make sure in any instance we are doing more for mental health — and of course if we can get someone treatment instead of putting them in prison, which obviously in many cases would have a very deleterious effect on their psyche … But we also have violent people as well that we need to be making sure we are not releasing to go out and commit another act because of their mental illness."