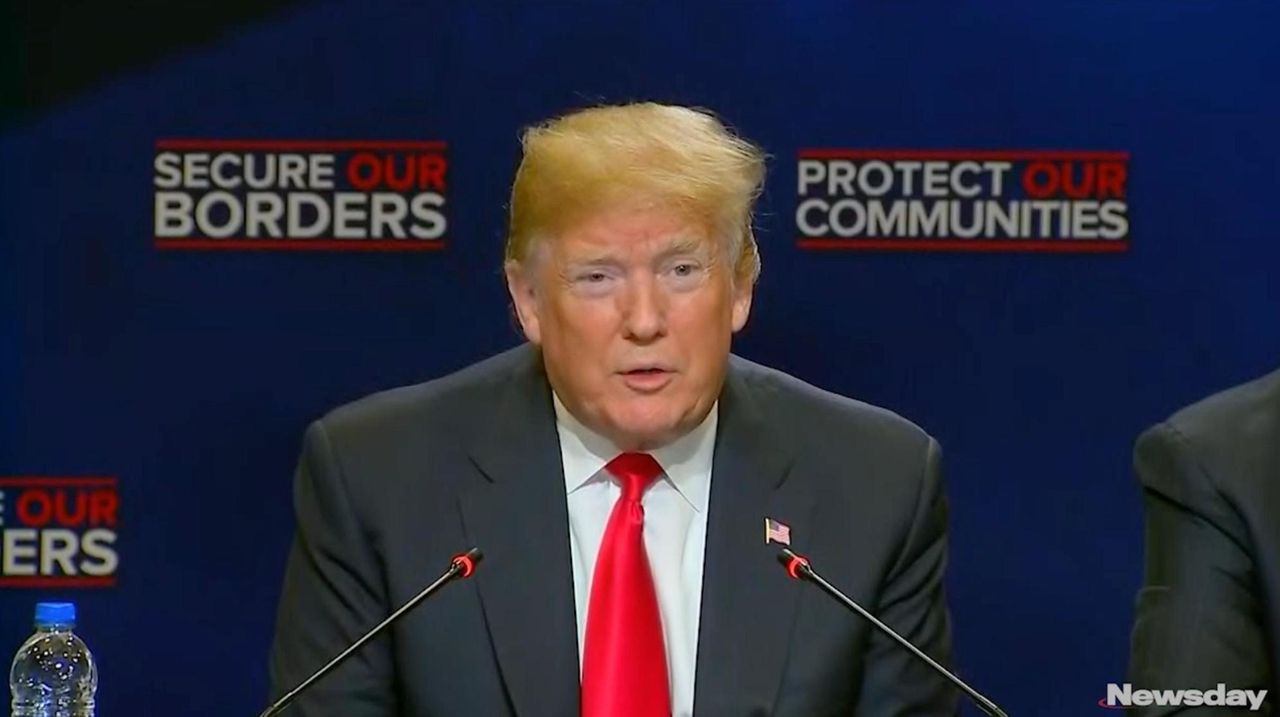 President Donald Trump returned to Long Island on Wednesday afternoon to speak at a roundtable discussion on MS-13 at the Morrelly Homeland Security Center in Bethpage.  Credit: News 12 Long Island

President Donald Trump came to Long Island on Wednesday for the second time in less than a year to put the spotlight on brutal acts of violence attributed to the MS-13 gang, while promoting his agenda to close “loopholes” in immigration laws.

“These are not people — these are animals, and we have to be very, very tough,” the president said at an afternoon roundtable discussion, continuing to use a term for gang members that has drawn heat from critics.

But it was the parents of the two murdered Long Island teens — 15-year-old Nisa Mickens and 16-year-old Kayla Cuevas — who most poignantly expressed what is at stake.

They spoke about having to persevere after a loss beyond measure: the murder of their daughters in Brentwood in September 2016. The girls were assaulted with baseball bats and a machete, in brutality that showed the ruthlessness of MS-13.

Trump, who grew up across the Nassau border in Queens: "I essentially grew up on LI...this use to be where you leave your doors unlocked..." says it's "unthinkable" that some neighborhoods are now like "occupied territories."

Trump just said MS-13 killed a cop in Nassau. In fact the gang directed its members to murder a county or Town of Hempstead officer but have yet to follow through on the threat

“We have to go through this every day,” said Robert Mickens, Nisa’s father. “This is an ongoing struggle. It’s not easy for us to wake up, look down the hallway, and not see my daughter lying in her bed and me waking her up for school.”

Two birthdays have passed since his daughter’s death, he said; she would have been graduating this year.

“It’s one thing for children to have a little argument, a little fistfight, walk away the next day,” Mickens reflected, “but to murder another student, a fellow classmate that you see every day, you are not in my opinion, you are not an ordinary human.”

He said the community should rally behind law enforcement to help put gang members “where they belong, in prison.”

Trump presided over what had been billed as an immigration roundtable, a conversation in which administration voices, local police agencies and legislators spoke about anti-gang efforts and the challenges ahead.

Rob Mickens, father of Nisa Mickens, paints a picture of life after his daughter was slain by MS-13: "We’ve missed two birthdays of hers." Notes she would have graduated from Brentwood High this year.

"fantastic people" Trump whispers to parents of slain Brentwood teens Kayla Cuevas and Nisa Mickens as he enters room and greets them. The parents had already met Trump earlier in January when he invited them to attend State of the Union address

"No body would be that crazy to run against Peter," -- Trump says in introducing @RepPeteKing. Gives King his endorsement.

The president watched attentively and nodded as the parents described their sorrows. At one point he put his arm over Evelyn Rodriguez, Kayla’s mother, to comfort her. Before he left, he also greeted other relatives of victims in the audience.

Rodriguez called for schools to work to intervene early and seek law enforcement’s help to stop the gangs, while calling for tighter regulation on the release of young immigrants who come to the country as unaccompanied minors and are vulnerable to gang recruitment.

“My daughter, Kayla, was a beautiful girl,” Rodriguez said, her voice breaking. “She had dreams, and they took that away from her. That’s not right. And how these kids were murdered, tortured, is unacceptable.”

Elizabeth Alvarado, Nisa’s mom, spoke through tears about enduring the sadness of waiting every day for her daughter to return from school. Freddy Cuevas, Kayla’s dad, struggled to get out the words, thanking Trump “from the bottom of my heart.”

As Trump speaks at MS-13 discussion, protest against him has broken up. Maria Magdalena Hernandez, a Salvadoran immigrant from Brentwood, site of several MS-13 murders, said Trump is “using this tragedy to advance his agenda of hate.”

Mickens notes the U.S. is a nation of immigrants but adds: "The American dream is still there, but if you’re going to come here with acts of violence, then you can stay over there...because we don’t need that..." https://t.co/0T1pn6wGNm

Behind them were the American flag and the dual messages “Protect our communities” and “Secure our borders.”

Many of the participants’ concerns seemed to touch on the influx of unaccompanied minors — children, primarily from Central America, who cross the border seeking refuge in the United States and are targeted by the same gangs they flee. Thousands have been resettled on Long Island under laws that afford them humanitarian protections.

The president did not shy away from criticizing Democrats for not supporting his agenda of tough enforcement.

“Crippling loopholes in our laws have enabled MS-13 gang members and other criminals to infiltrate our communities, and Democrats in Congress refuse to close these loopholes, including the disgraceful practice known as catch and release,” Trump said.

Trump also stated — erroneously — that MS-13 members had “killed a cop for the sake of making a statement.” The Long Island police were on high alert last month after MS-13 threatened to kill police in retaliation for gang members’s arrests, but no such incident has taken place.

Protesters, who demonstrated outside the venue but dispersed before Trump arrived, said they saw the roundtable as a pretense to bolster immigration restrictions based on fear.

María Magdalena Hernandez, a Salvadoran immigrant who lives in Brentwood, said the president “doesn’t care about Brentwood” and is using MS-13 as an excuse to promote hard-line policies and deport non-criminals. “In reality, they’re using this tragedy to advance his agenda of hate.”

Local law enforcement officials said they welcomed the support from the White House, and spoke of fighting back to crush MS-13.

Nassau’s Ryder said his department had identified about 500 MS-13 members, of whom about 250 were active. He asked for improvements in information-sharing with local police. “If our intelligence is better, if our evidence-based approach is better, and our community relations stay strong, we can make a difference and turn the tide,” Ryder said.

Hart said the work of Suffolk police’s with federal law enforcement has brought about 355 arrests of 235 MS-13 gang members since Nisa and Kayla were killed. “We could certainly use additional funding to assist in offsetting additional policing efforts and costs moving forward,” she said.

The administration did not outline any specific proposals, but King said later that something is in the works.

“We are hoping to get an immigration bill in June and get as much enforcement there as we can,” said King, adding that would include measures to address the release of unaccompanied minors and more funding for a border wall. Congress could also extend protections to immigrants under expiring programs like Deferred Action for Childhood Arrivals, he said.

Helen Vesik, 64, a West Hempstead resident and Trump supporter who was among guests, said she was both moved and alarmed by the parents’ stories and hoped something was done. She favors allowing people to immigrate legally, but thinks the president is right in pushing back against the gang.

“I think he really is trying to help stop the lawlessness,” Vesik said, so “that it won’t really affect our society too much to the point where our daily lives won’t be the same.”

King, Zeldin join Trump at meeting on combating MS-13: The president calls upon Congress to approve his $25B request for a southern border wall.

Parents of slain Brentwood girls say they were comforted by Trump: The parents met with the president in the Oval Office the afternoon of Jan. 30, during which they spoke with him briefly and took photographs.

Dreamers, immigrants at LI rally denounce Trump’s speech as divisive: Some at the Brentwood gathering criticize the president’s linkage of immigrants with gang violence, saying it harms chances of a compromise.

Long Islanders in spotlight at Donald Trump address: Long Islanders at the State of the Union speech were invited to stand for different sides of the immigration debate.

Dreamer, alleged gang victims’ parents invited to State of the Union: Rob Mickens, father of the slain Nisa Mickens, said his message to President Donald Trump is, “Continue working to eradicate this gang.”

LI immigrant advocates protest Trump visitLong Island immigrant advocates rallied ahead of President Donald Trump's planned visit to Bethpage to say they do not welcome him and that local officials should reject his rhetoric. MS-13 on LIWith more than 1,000 of the gang members estimated to be on Long Island, here's what we know about how they operate and what's being done about it.