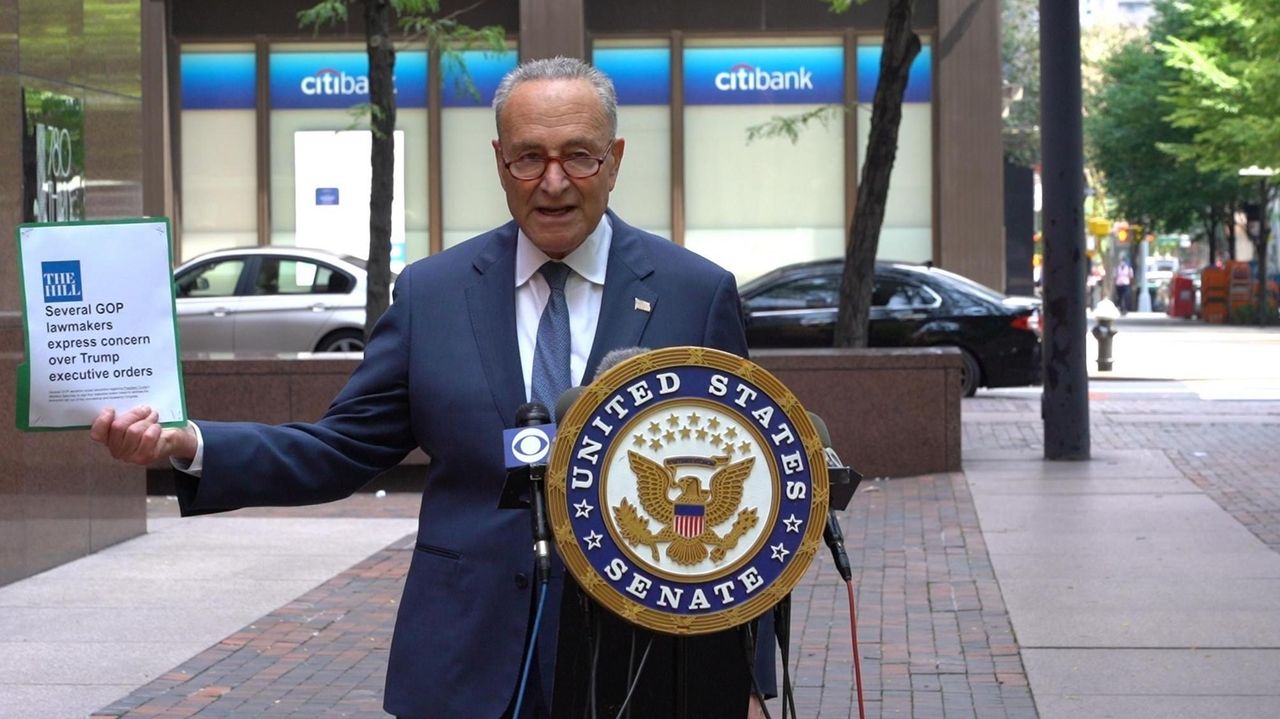 Sen. Chuck Schumer (D-N.Y.) criticized the president's recent executive orders and called for Washington's Republicans to come back to the table to negotiate a stimulus package. Credit: Charles Eckert

Trump said Saturday his actions would add a temporary $400 weekly enhanced unemployment benefit, defer a payroll tax for those making less than $100,000 a year and extend an eviction moratorium.

But top Democrats poked holes in those plans, especially as the president does not have Congress’ constitutional authority to set taxes and spending policies. Democratic House Speaker Nancy Pelosi said on CNN that her legal counsel called the actions “absurdly unconstitutional.”

White House legal counsel greenlighted the measures, said chief economic adviser Larry Kudlow, who acknowledged they will likely be challenged in court. But Democrats signaled a hesitation to fight them.

“This is a moral dilemma,” Sen. Dick Durbin (D-Ill.) said on NBC's "Meet The Press." “We want unemployed people to receive benefits. We never wanted them cut off at all. I’m not going to suggest we run out to court at this point, but some will.”

Administration officials said Trump had to act as a $600 enhanced unemployment benefit and eviction moratorium had expired and Congressional negotiations had broken down.

“We said to the president, ‘You have to go forward with executive action because we have to help the  American people,' ” U.S. Treasury Secretary Steven Mnuchin said on Fox News Sunday.

But Democrats raised questions about whether the measures would be effective, even if they are allowed to go through.

Democrats noted the $400 unemployment benefit would only be available in states that pay for 25% of it, at a time when many state governments are struggling with a fiscal crisis and considering service and staffing cuts.

Administration officials said states could use federal funding they received from the CARES Act for their share. Kudlow said the federal government could waive the 25% contribution requirement and he acknowledged officials did not yet know how many states would be able to opt in.

Democrats also said the eviction action only requires that officials consider halting evictions, not definitively ending them. Kudlow said the measure “absolutely” will halt evictions on federally backed properties, but that federal health officials would have to declare an emergency based on coronavirus community spread to stop evictions elsewhere.

Kudlow said the payroll tax deferral, which Trump would seek to make permanent if re-elected, could provide $1,200 this year to workers.

The payroll tax funds Medicare and Social Security programs. In response to questions over whether the deferral would gut those programs, Mnuchin said the programs would be reimbursed by the general fund.

"We'll deal with the budget deficit when we get the economy back to where it was before," Mnuchin said.

Democrats and Republicans traded blame for the breakdown of negotiations and urged the other party to come back to the table.

Democrats said they agreed to lop off $1 trillion from their plan by reducing the time period for which it is effective. They said they want Republicans to meet them in the middle at a $2 trillion deal and include more funding for local and state governments, schools, coronavirus testing and aid for the hungry.

“We’re in a stalemate because Republicans from the start have never understood the gravity of the situation we’re in,” Pelosi said on CNN’s State of the Union.

But Republicans said Democrats should pass legislation as particular items are agreed upon, not until a final package is negotiated. Mnuchin said the sides agree on extending the paycheck protection program and sending out another stimulus check, but not on funding amounts for other programs.