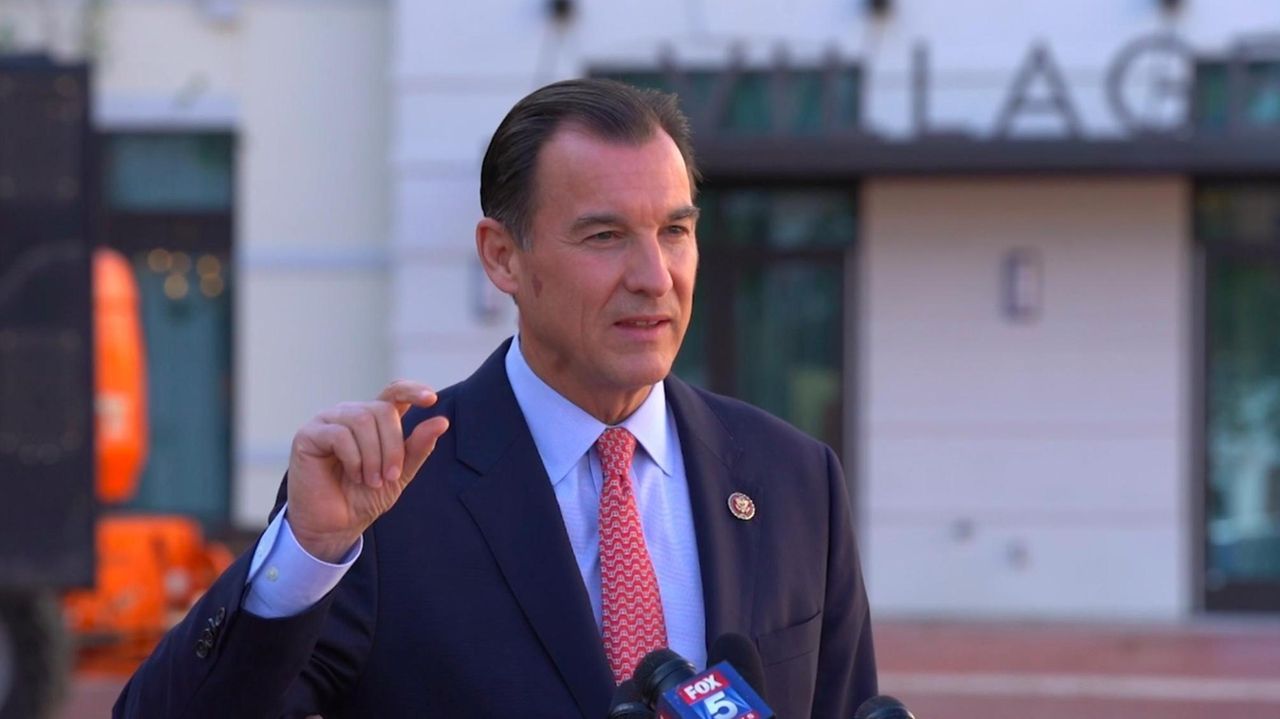 On Wednesday, Rep. Tom Suozzi (D-Glen Cove) said he was counting on outstanding Democratic absentee ballots to put him over the top in the 3rd Congressional District race against Republican George Santos. Credit: Jim Staubitser

Republicans in the 1st and 2nd congressional districts said they were confident Wednesday they have enough votes to win — even after mail-in ballots are counted — as their Democratic challengers awaited a full count and declined to concede.

As of Tuesday, district voters had returned 75,091 absentee ballots: 35,177 from enrolled Democrats, 17,516 from Republicans and 18,017 from voters not affiliated with a political party. The remainder are from members of minor parties.

Absentee ballots are to be counted if they are delivered in-person by Election Day to the county board of elections, or postmarked by Election Day and received by Nov. 10.

In the 2nd District, which includes parts of Nassau and Suffolk counties, state Assemb. Andrew Garbarino (R-Bayport) led former Babylon Town Council member Jackie Gordon, a Democrat, by 45,797 votes, according to unofficial tallies from both counties.

Veteran Rep. Peter King (R-Seaford) is retiring from the seat.

Voters in the Suffolk portion of the district returned a total of 36,570 absentee ballots: 17,877 from Democrats, 8,463 from Republicans and 8,318 from unaffiliated voters, with the balance from minor party members.

In the Nassau section — about 25% of the district — 17,944 absentee ballots were returned: 7,579 from Democrats; 5,572 from Republicans and 3,990 from unaffiliated voters, with the rest from minor party members.

"We feel very good. We had great support all over the district," Garbarino said Wednesday outside his home in Bayport.

Not long afterward, Gordon posted on Twitter: "With the unprecedented number of Long Islanders casting absentee ballots, it is clear that this election will not be called anytime soon. Every vote must be counted and every vote matters. Democracy will prevail."

Suffolk Democratic Chairman Richard Schaffer said Zeldin and Garbarino, "can do whatever they want, but it is going to come down to when all the votes are counted."

Schaffer said Democratic candidates in the 1st and 2nd Districts will "concede if they lose."

Jesse Garcia, the Suffolk Republican Party leader, said he believed his candidates were "in an outstanding position, if not a definite position." He said he did not believe the number of absentee ballots would give Democrats enough votes for victory.

Nassau Republican Committee Chairman Joseph Cairo said while some absentee votes were outstanding, he was confident Garbarino would win in the 2nd District.

In the Queens portion of the district, a total of 14,340 ballots were returned. Democrats returned 9,353 absentee ballots, Republicans returned 1,736 and unaffiliated voters submitted 2,791.

In Suffolk, there were 28,671 absentee ballots returned, including 14,100 from registered Democrats, 6,037 from Republicans and 7,174 from unaffiliated voters.

"It is clear that the out-of-touch agenda and messaging of my opponent is showing," Santos tweeted Wednesday. "#WeThePeople are tired of the status quo, hopeful to see change coming to #NY3."