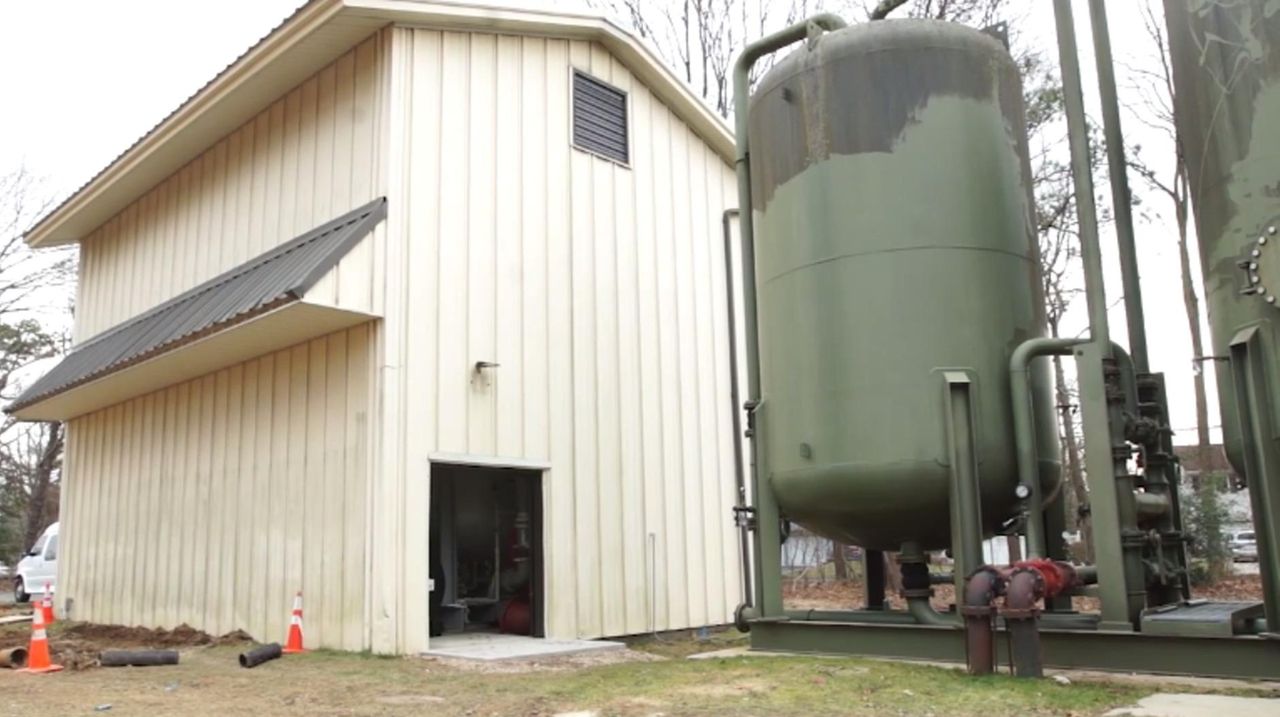 A water processesing facility in Central Islip is preparing new technology to treat contaminated water and hopes everything will be up and running by the spring of 2017. Credit: Newsday / John Paraskevas

A chemical of growing concern to health experts has been detected throughout much of Long Island’s drinking water, prompting state officials to investigate why and to approve a pilot treatment method never before used here.

The concern was sharpened by a U.S. Environmental Protection Agency survey released in August showing that the man-made chemical — called 1,4-dioxane — is more prevalent in the Island’s water than anywhere else in the state and far exceeds the national average. There is not yet a state-approved method for removing it from the supply, adding to the pressure officials and water suppliers feel to address the situation.

Even though the likely increased risk of cancer at the levels measured in the survey would not appear to be dramatic — generally one extra case per million people after a lifetime of extensive exposure — its widespread presence here is striking. The survey found it at levels that would probably generate the increased risk in 71 percent of water-supply systems tested on Long Island, compared with only 7 percent of the systems nationally.

Also, the highest concentration in the nation — 33 parts per billion — which has an estimated cancer risk closer to 1 in 10,000 after extensive lifetime exposure, was found in a well in December 2013 by the Hicksville Water District. Officials restricted the well’s use, making it the first to be taken out of operation when demand is low and the last to go operational in times of high use. The well is one of 15 the district has to serve its 16,000 accounts.

Often used as a stabilizer for manufacturing solvents, 1,4-dioxane is thought to be present, as well, in about 46 percent of personal care products including shampoos and detergents, according to a 2008 report from the nonprofit Environmental Working Group, a Washington-based group focused on protecting public health and the environment.

The Environmental Protection Agency lists 1,4-dioxane as a probable carcinogen, meaning that, while the evidence is not definitive, research indicates that it is a likely cause of cancer, though effects vary based on exposure, a person’s health and other factors.

The EPA survey covered 28 public water districts serving 2.97 million people on Long Island, where the sole source of water is a network of underground aquifers accessed by public and private wells.

The appearance of 1,4-dioxane here is most likely a residue of Long Island’s industrial era as chemicals used over the years for aviation, manufacturing and agricultural operations have filtered through the area’s sandy landscape, polluting the water supplies and turning up frequently as contaminants in the Island’s more than 250 state and federal Superfund sites. The EPA said in a 2014 fact sheet that 1,4-dioxane is probably present where other chlorinated solvents are found, particularly 1,1,1-trichloroethane, or TCA. Nearly 50 state and federal Superfund sites on Long Island contain TCA contamination, according to a Newsday review of Superfund files.

The elevated levels of 1,4-dioxane have become a focus of a state task force on water issues, which was alerted by regional water suppliers. “Many of them brought 1,4-dioxane to the task force’s attention,” said Venetia Lannon, the state’s deputy secretary for the environment. “We heard them loud and clear.”

Yet, state officials and the suppliers say they are struggling to determine the best course of action in the absence of a clear direction from the EPA. The chemical was included for the first time in an EPA survey program that every five years requires large water suppliers and a sampling of small systems to test for as many as 30 contaminants that, while unregulated, have been identified as worthy of further monitoring. They include viruses, hormones, metals and volatile organic chemicals, some of them considered potential cancer-causers. In a process that can take years, the agency can use the data to decide whether or not to regulate a contaminant after factoring in whether it is widespread and can cause health problems and whether regulation will protect public health while not being too costly.

Under the newly revised Toxic Substances Control Act, the agency is also conducting a risk evaluation of 1,4-dioxane because the chemical, in addition to being released in high levels into groundwater, is present in the air and indoor environments. The EPA has six months to release a document detailing health risks and associated hazards, as well as potential restrictions on its commercial use.

But for now, 1,4-dioxane is unregulated by the agency, so there is no national drinking water standard setting a level safe for consumption. New York State has a limit of 50 parts per billion for any unregulated organic chemical, including 1,4-dioxane, that has been determined to affect the nasal cavity, kidney and liver. State officials say they are evaluating whether to set a specific limit for 1,4-dioxane.

“We don’t even know what to do because we’re looking for EPA to take the next step,” said Dennis Kelleher, president of the engineering and consulting firm H2M Water and public relations representative for the Long Island Water Conference, a coalition of more than 50 water suppliers and industry representatives. “That’s the uncomfortable situation we’re in right now.”

In November, 12 of 18 members of the Suffolk County Legislature sent a letter to Gov. Andrew M. Cuomo asking for the state to set a regulation, as did the nonprofit Citizens Campaign for the Environment. And state Sen. Kemp Hannon (R-Garden City) said last week he would file legislation this session to create a Drinking Water Quality Institute focused on examining and regulating emerging contaminants, including 1,4-dioxane.

The state will sample for 1,4-dioxane on Long Island this year, the governor’s office said Monday, but couldn’t provide specifics.

Scientists, toxicologists and water officials stress that detecting a compound may not mean there is a health risk. One part per billion is equal to a drop in an Olympic-size swimming pool.

When a contaminant like 1,4-dioxane exceeds the state limit or is even detected, though, water suppliers can act — and some on the Island have swung into action.

The Suffolk County Water Authority received approval in November from the state Department of Health to run a large-scale pilot program to remove the chemical. The request took three years to approve. Construction of the treatment system should be complete by April, and the authority will need one year of data before going back to the state for the treatment method to be approved, CEO Jeff Szabo said.

The project involves a process known as advanced oxidation to remove the chemical. It relies on ultraviolet light and hydrogen peroxide to change the chemical makeup of the contaminant into a byproduct that can be filtered through granular carbon.

The authority registered 1,4-dioxane detections in 270 of its more than 600 wells while compiling data for the EPA survey.

“Because of 1,4-dioxane’s prevalence we think it’s important to act,” Szabo said. “We want to ensure to the public the product we put out is as safe as possible.”

The Hicksville Water District is also working with a contractor to test removal through a similar process that uses chlorine. The district has also asked the EPA and state Department of Environmental Conservation for help in locating the source of the higher levels of 1,4-dioxane. The one well that detected 33 parts per billion is used only in emergency situations, Commissioner William “Bill” Schuckmann said.

Water officials have also acted on another chemical measured at a high level in the EPA survey. A substance named Perfluorooctanesulfonic acid, or PFOS, was measured near Francis S. Gabreski Air National Guard Base in Westhampton Beach, and in November, local, state and federal officials began working to connect 57 homes near the airport with private wells to the public water supply. The chemical, used in firefighting foam and protective coatings for clothing and carpets, has been cited by the federal government as increasing a variety of health risks including cancer. Water can be treated for it through what is known as a granulated activated carbon system, which is commonly approved for use on Long Island.

Other unregulated contaminants were identified on Long Island in the EPA survey, but they have not evoked the same concern because they were measured at concentrations below EPA health concern thresholds or because they can be ameliorated with state-approved treatments or other adjustments. They include: the bleaching agent chlorate; a cleaning and degreasing solvent called 1,2,3-trichloropropane; and hexavalent chromium, which is naturally occurring.

Treatment can be costly

Treatment for 1,4-dioxane and many other chemicals can be costly. If the pilot treatment is eventually approved for 1,4-dioxane, adding it could cost between $500,000 and $900,000 per site, Szabo said.

“I think the conundrum is how does a utility balance that risk when they know there is something there versus the cost of treatment,” Eaton said.

EPA spokeswoman Enesta Jones said the only requirement on water systems is to put the results of their survey for unregulated contaminants in a water quality report distributed to customers annually.

“There are a lot of sort of unknowns from the drinking water perspective,” said Dr. Roger Sokol, director of the New York Department of Health’s Drinking Water Protection Program. “We don’t want to create a worse situation by introducing this different component.”

In February, Cuomo formed a task force to examine water quality issues statewide, with a focus on unregulated contaminants. In September, it announced a $5 million investment in SUNY Stony Brook’s Center for Clean Water Technology to research and develop treatment systems for emerging contaminants. On Monday, Cuomo announced he will propose a $2 billion fund to pay for clean-water infrastructure. As part of that plan, communities will be eligible to apply for money to install treatment systems for both regulated and unregulated contaminants.

At a water quality hearing in Hauppauge in September, Paul Ponturo, a senior water resources engineer at the Melville engineering and consulting firm H2M Water, suggested that a local unregulated contaminant program be set up to watch out for dangers on the horizon. He said the EPA “process is slow and inadequate in assessing the status of our drinking water resources.”

Ponturo said the Long Island Commission for Aquifer Protection — formed in 2014 by the legislatures in Nassau and Suffolk counties to evaluate water quality, threats and oversight needs — could help ensure that water suppliers know what contaminants could be in the water that need to be addressed.

Speaking of just one of them, 1,4-dioxane, Stan Carey, who is superintendent of the Massapequa Water District and chairman of the Long Island Water Conference, said, “We don’t want to scare to death the public but at the same time it is a big concern.”