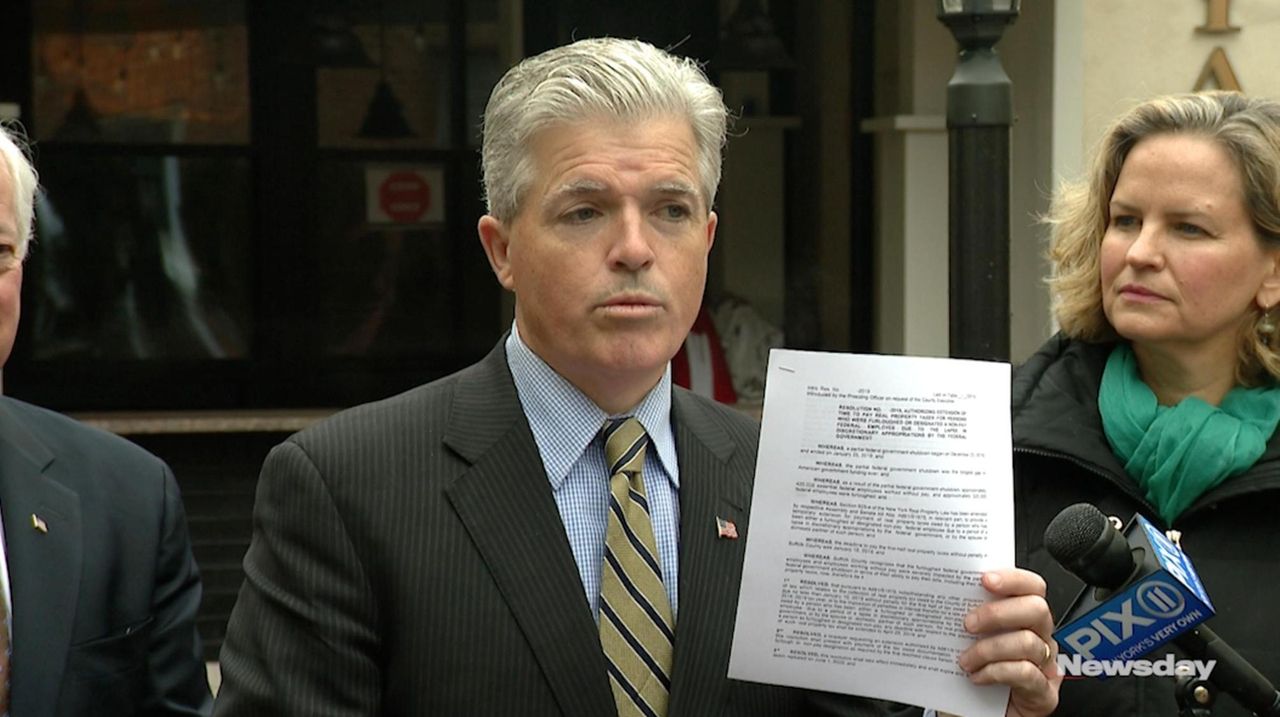 Both Steve Bellone and Laura Curran announced on Thursday, Feb. 7, 2019, that they will propose legislation giving those impacted by the government shutdown an extension period to file taxes.  Credit: News 12 Long Island

Federal employees who live on Long Island and were impacted by the record long government shutdown likely will soon have additional time to pay their property taxes.

The leaders of Nassau and Suffolk counties, both Democrats, announced Thursday that they will opt-in to state legislation granting federal workers who went unpaid or who were furloughed during the 35-day partial government shutdown — and their spouses — a 90-day extension to pay their property taxes.

"This 90-day extension is the least we can do for the families of federal workers who unfortunately got caught in the crosshairs of national politics," Nassau County Executive Laura Curran said at a news conference in Oyster Bay.

Curran plans to issue an executive order that will opt the county into the law once the receivers of taxes for Nassau's three towns and two cities authorize the extension. Suffolk, which has different tax collecting laws and policies, will file a bill opting into the state law. That measure must be passed by the Democratic-controlled county legislature.

Suffolk County Executive Steve Bellone called it "absolutely outrageous" that federal workers went unpaid during the shutdown, although they have since received back pay.

"This is one small thing we can do to assist families that have been impacted by the failure to act in Washington," Bellone said.

Randy Brown, national airspace operational manager at the New York Terminal Radar Approach Control in Westbury, was forced to work without pay during the shutdown.

"As time went on it started to wear on us," said Brown, a retired Air Force master sergeant. "Most federal employees in New York live paycheck to paycheck. It affected us. And it affected me greatly."

The State Senate and Assembly, both controlled by Democrats, passed the extension earlier this month and the bill was signed into law by Gov. Andrew M. Cuomo.

For their residents to take advantage of the extension, municipalities, including towns, cities and villages, must pass a resolution to opt in. Officials in the towns of Hempstead, North Hempstead, Oyster Bay and Huntington and the City of Glen Cove have advanced measures authorizing the extension.

An extension will be granted automatically if a municipality opts in. But affected federal employees must notify their municipalities' tax collector that they are seeking an extension and provide evidence of their employment status.

State Sen. Jim Gaughran (D-Northport), a co-sponsor of the Senate legislation, said the extension will provide more flexibility for federal workers struggling to balance between paying their kids' tuition and their mortgage.

"It's something that gives them a tool, so as they are figuring out which bill to pay, they don't have to worry about paying their property taxes," Gaughran said.

There are an estimated 15,000 federal workers on Long Island. The extension does not apply to federal contractors or to federal employees who pay their property taxes through their home mortgage.