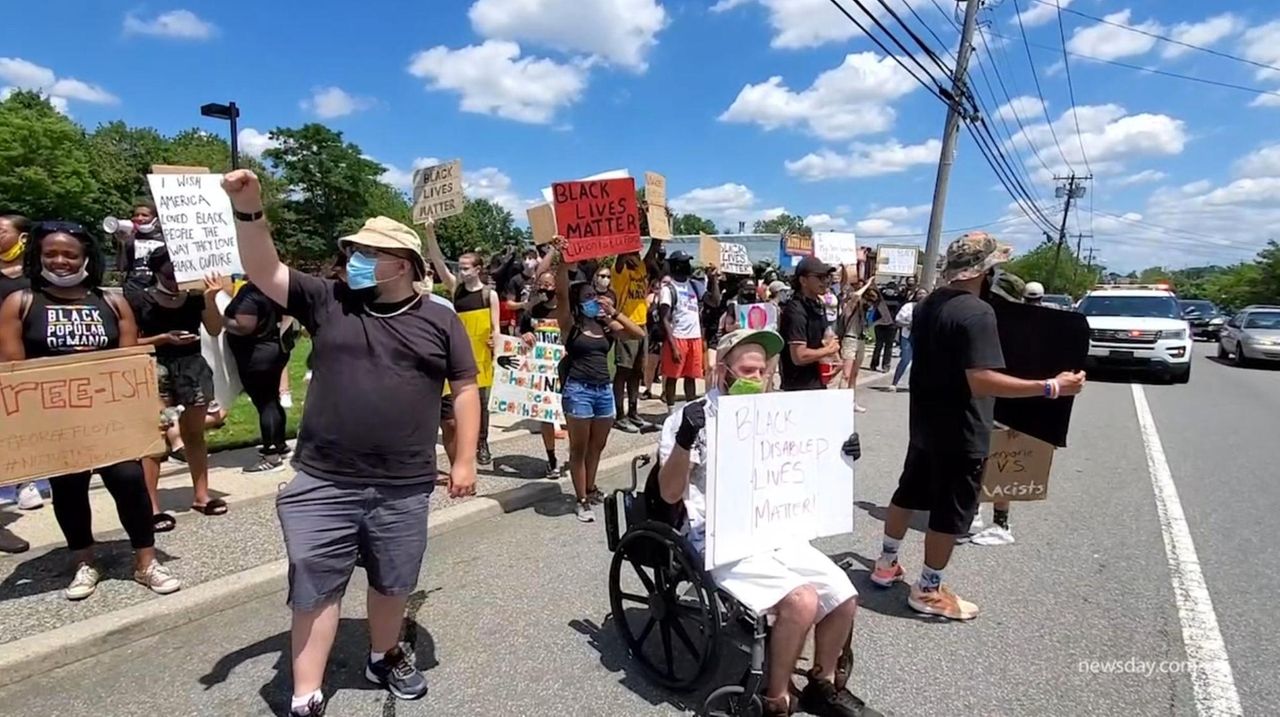 Black Lives Matter protesters from Brentwood and Central Islip marched from train stations of the two communities and converged in a show of solidarity against police brutality on Sunday.

Holding banners in school colors — Central Islip’s purple and gold and Brentwood’s green and black —- the signs combined to say, “I am my neighbor’s keeper” as the combined crowd of 150 chanted “No justice, no peace” and “Black Lives Matter” in the intersection of Suffolk Avenue and Route 111 in Central Islip.

“We wanted to unite the two communities to show we are our neighbor’s keeper,” said Brittaney  Antoine, 31 of Brentwood. “We’re tired of black and brown folks being murdered, and justice never coming for it.”

“We want our neighbors to know we’re in this fight together” against police brutality and for social justice, said Rebecca Carbone, 30 of Central Islip. She said there’s often considered a divide between the two neighboring communities, which are among Suffolk County’s most diverse.

In Bayside, Queens, there were dueling demonstrations, pro- and anti-police, at a scheduled Blue Lives Matter rally, with clashes between the groups.

“Back the blue!” the pro-police group chanted, which included some who wore Trump T-shirts, others who waved thin-blue-line and American flags.

Protesters who appeared to be affiliated with the Black Lives Matter movement chanted “Hands up, don’t shoot!” and carried signs saying police should be jailed.

At least one man was handcuffed and detained as pro-cop demonstrators cheered and cursed him, a blue Trump flag waving nearby.

Chalked nearby on the sidewalk were the names of Black people who died in confrontations with the police or in jail.

The Long Island marchers kept to the sidewalk and chanted the name of those killed by police, including George Floyd, whose death in Minneapolis has sparked weeks of protests across the nation.

Organizers, including CI Connects for Change and Uplift Brentwood, said they notified police about the route and police had asked them not to block traffic as they marched, part of new guidelines released by the Suffolk Police Department this week after a Black Lives Matter protester in Huntington was struck on Monday while protesting in the street.

For about 10 minutes on Sunday, police shut down the intersection of Route 110 and Suffolk Avenue in Brentwood when the two groups converged. Protesters held the banners together and chanted, and then went to a nearby parking lot for speeches about racial injustice and the need to reform policing.