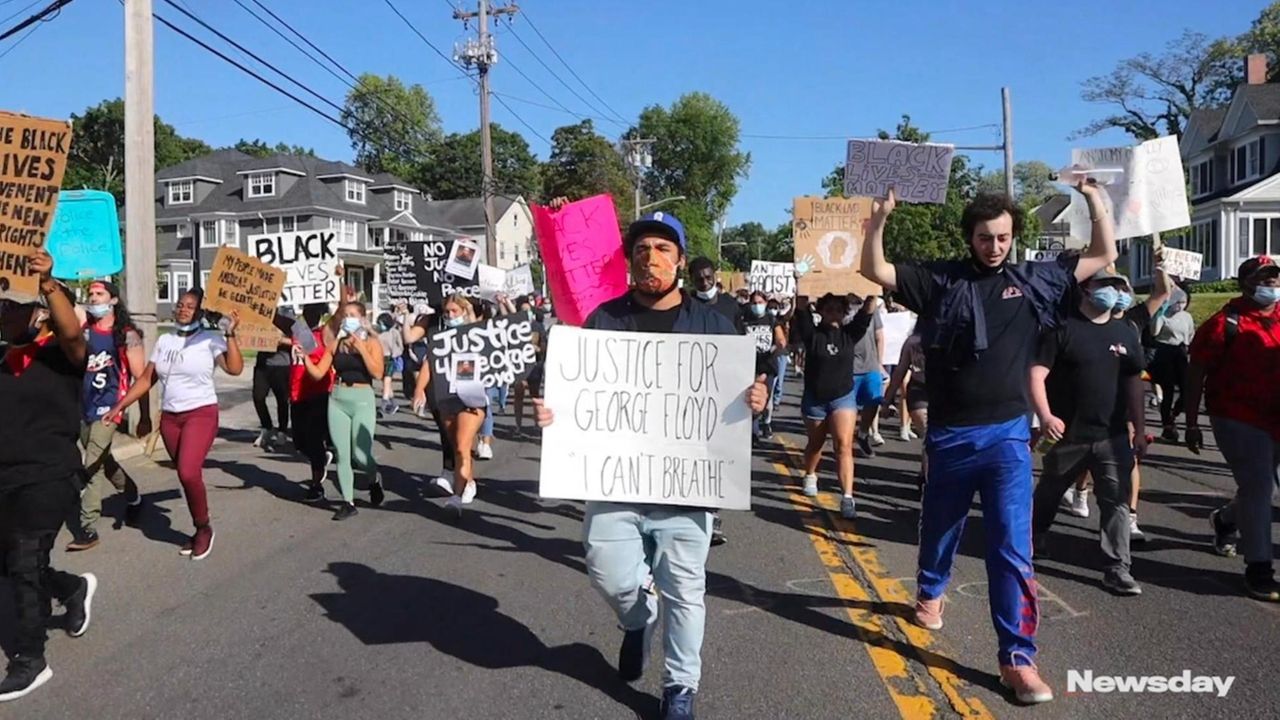 Long Islanders returned to the streets Wednesday to take part in a fourth day of planned demonstrations in the wake of the killing of George Floyd, the unarmed black Minneapolis man who died of asphyxiation last week after a white police officer knelt on his neck for more than eight minutes.

Events protesting the racially charged homicide took place through the day and into the night in Shirley, Lindenhurst, Mineola, Huntington, Bethpage, Valley Stream, Peconic, Greenport, Mastic and other communities. The demonstrations had Long Islanders out in force, marching, chanting and even lying down in the street in Shirley to show they are part of the rage that has grown across the country against the Floyd killing.

Nassau and Suffolk police departments on Thursday reported there were no arrests.

Among the issues marchers have demanded is accountability. They were buoyed by the upgrading of charges Wednesday against the officer who knelt on Floyd, Derek Chauvin. He was originally charged with third-degree murder and second-degree manslaughter. But prosecutors on Wednesday upgraded that to second-degree murder, and also charged the three other officers with aiding and abetting murder.

In Greenport, a reverent crowd of several hundred gathered along Third Street outside the Clinton Memorial A.M.E. Zion Church Wednesday night to hear the words of the Rev. Natalie Wimberly. “Enough is enough,” she roared. “This has got to stop and it will stop when we recognize that diversity of human beings is a gift from God.”

In an interview, Wimberly called the upgraded charges “a first step” toward healing the deep wound of Floyd’s killing. “But we still have to see what transpires when the case goes to court and the jury has heard the case. Then I can exhale,” she said. “We’ve seen this before.”

Earlier, about 50 protesters in Mineola chanted “Justice!” in front of Nassau County Court on Old Country Road at about 1 p.m. as passing cars honked in support. They held signs and read off the names of victims of police violence. Some carried an American flag and said they wanted to peacefully demonstrate to inspire change.

“We want to make sure our opinions are heard in a safe matter conducive to change,” organizer Umar Asif, 28, of Bethpage said. “This is not so much an angry demonstration. We’re not rioting but we’re paying attention.”

Among the protesters were two dental assistants from NYU Winthrop, who took part in scrubs.

“We fought a virus for weeks in the hospital, only to wake up to see another virus plaguing our world with the murder of George Floyd,” Stacy Wright, 38, of Carle Place said. “Police are also there to save lives. Just like we save lives in the hospital, we should be saving lives on the street, not taking them.”

Up to 100 protesters stood on Stewart Avenue in the pouring rain chanting “Black Lives Matter” and “No justice, no peace.”

Among them was Natalie Romero, 28, of Farmingdale, who said: “We want to spread awareness of the problems, that this is not a race problem, but a world problem. I hope the issue of police brutality is something we can all be aware of to protest peacefully and hopefully pass more laws to protect African Americans.”

The protest was organized by 18-year-old Sara Northgard of Bethpage, who said she has donated to organizations but wanted to take to the streets to spread messages against oppression.

“I don’t know if this is going to accomplish much, but I want to show even the smallest things can make a little bit of change,” Northgard said.

﻿A small but enthusiastic group of protesters gathered in the rain on Sunrise Highway in front of Babylon Town Hall in Lindenhurst. Drivers honked horns in support as they held signs that read “No Justice No Peace” and “All Black Lives Matter.”

“We have so much support,” said Tanya Carpenter, of Amityville. “We started with six people and the next day was like 50 people. They did a car parade for us. It was beautiful.”

Some Long Island officials and entrepreneurs have taken precautions to avoid possible damage to property by demonstrators and by any who used the protests to loot businesses or inflame tensions through social media posts and flyers espousing false claims.

But so far, there was just one instance of looting, which occurred in Hempstead Monday night, police said, and other threats of violence on social media have proved to be false.

Hempstead Village’s top cop on Wednesday said the village is increasing its police presence after the looting incident Monday. Police Chief Paul Johnson said three people were arrested after a group of men broke into a clothing store on Fulton Avenue.

Some shops at the Americana Manhasset have boarded up.

“Out of an abundance of caution, a number of our brands made the decision to board their stores, similar to what they are doing in their other locations,” a shopping center representative said in a statement, declining to elaborate.

But Keith Banks, 55, of Wyandanch, said the thought of boarding up his barbershop never crossed his mind. He opened Sir Shave in Wyandanch Village two years ago and was forced to shut its doors for the first time in mid-March when Gov. Andrew M. Cuomo ordered the closure of all nonessential businesses.

“There’s been about seven protests in the area, some of them right outside our shop. All of them have been peaceful,” he said. “There’s a T-Mobile store next door … no concerns there either. We’re more excited and looking forward to being able to welcome our customers back here and preparing for doing that safely.”

Nassau Police Commissioner Patrick Ryder also released a statement Wednesday dispelling rumors about false claims on social media that yellow crosses that were being painted on items, which have been spotted around the county, are not markers for protesters to strategically place bricks or weapons to use to commit violent acts.

He said the markings "have been observed for over a month and have nothing to do with the current protests occurring throughout Nassau County and the Country."

Floyd's brother calls for end to violence, looting, Brooklyn pastor saysThe preacher spoke on behalf of the brother of George Floyd, the unarmed African American man killed in Minneapolis police custody.   Cuomo apologizes to NYPD's top cop and officers, official saysCuomo confirmed Wednesday that he spoke to Shea, hours before protesters and cop engaged in sporadic but sometimes tense nighttime standoffs in Brooklyn and Manhattan. See photos of protests on LI over George Floyd's death in MinneapolisProtests in communities across Long Island, including Plainview and Riverhead, have occurred following the death of George Floyd by a Minneapolis police officer.