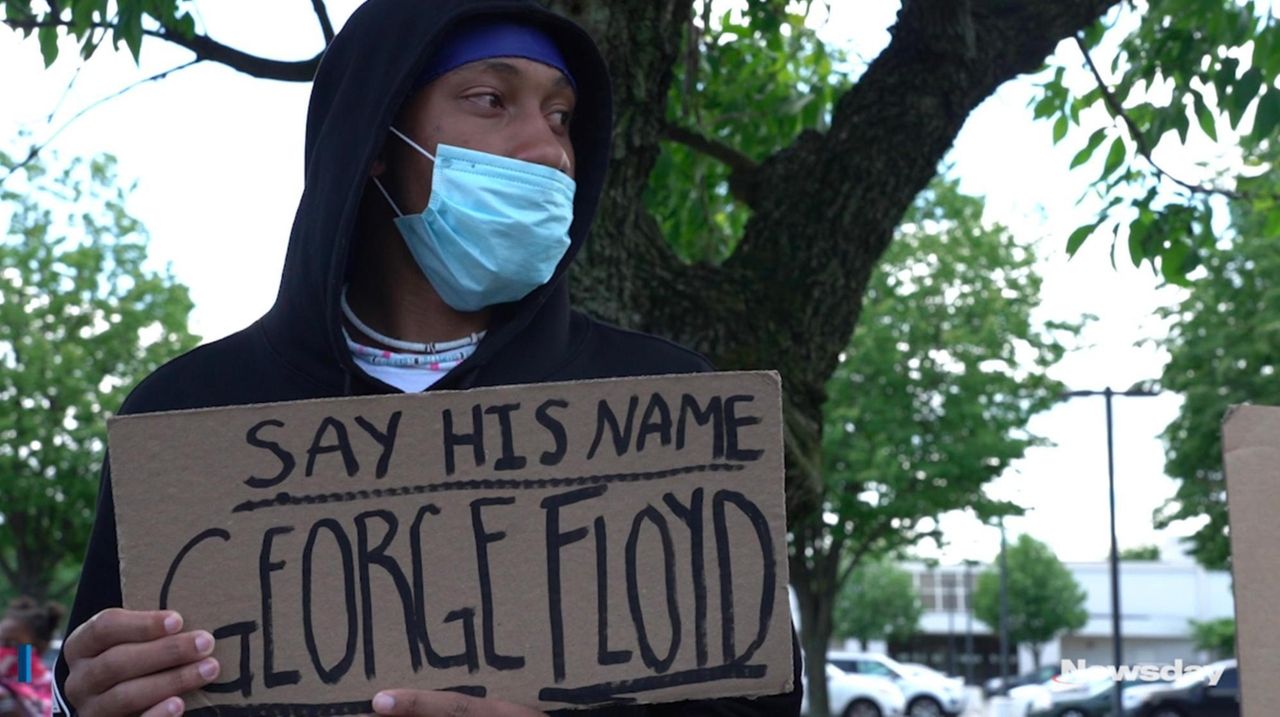 Protesters rallied peacefully across Long Island Monday to condemn police brutality and decry racism — part of a wave of demonstrations nationwide that has continued for nearly a week following the death of George Floyd in Minneapolis.

They carried signs, chanted, marched and spoke with rage and passion, demanding justice for Floyd while local law enforcement hovered nearby and even, at times, participated. As of early Monday evening, the mostly orderly nature of the gatherings stood in contrast to the violence that marked New York City protests.

More than 2,500 people of all races and ages streamed through Mineola and Garden City around county buildings and the Nassau police headquarters, calling for an end to institutionalized racism. They chanted "Justice for George Floyd" and cited well known cases of young black men killed in confrontations with police across the nation and on Long Island.

Despite a heavy police presence that included rooftop sharpshooters, and heated anti-law enforcement rhetoric the protest was peaceful. And in an extraordinary moment, the protesters took a knee in unison and were joined by Nassau Police Commissioner Patrick Ryder.

A spokeswoman with Nassau police said she was not aware of any protesters who were arrested. A Suffolk police spokesman said shortly after 8 p.m. there had been no arrests related to protests in the county Monday.

Nassau police said about 10:15 p.m. a group of protesters were marching on Northern Boulevard in Manhasset. Officers were monitoring, a spokeswoman said.

Earlier, a speaker in Mineola, Bobbie Powell of the NAACP Hempstead branch called Floyd’s death a”modern day lynching in 2020. We can’t have this anymore. It’s happening too often. It is not a crime to be brown skinned in America.”

Shanequa Levin, co-founder of the Women’s Diversity Network, said she fears for the safety of her children and siblings in their interactions with police.

“It’s time to create some consequential action,” Levin said to massive applauds. “And what are we going to do if our demands are not met? We will take it to the streets. And if we don’t we will shut it down.”

They carried signs reading “I can’t breathe again” and “how many more lives?” and held photos of Floyd and the officer charged with his murder. Organizers from the Young Progressives of Nassau County encouraged residents to head to the polls to vote out lawmakers who don't support their cause and urged passage of reforms that would increase police transparency and accountable.

The demonstrations were sparked by the killing of Floyd, 46, an unarmed African American Minneapolis man who died Memorial Day after a white police officer, Derek Chauvin, knelt on his neck for nearly eight minutes.

Chauvin has been charged with third-degree murder while three officers involved in the arrest have yet to be charged. All four officers were fired from the department.

In Commack, Natalie McCann, 19, was of one of about 260 protesters at the junction of Jericho Turnpike and Veterans Highway to call for institutional reform in how law enforcement interacts with minorities.

"We need radical change and … we need to call out the people who are not speaking out," McCann said.

The ethnically diverse group of protesters chanted "say his name," and "hands up, don't shoot" as they held signs calling for an end to racism. Women with baby strollers joined with grandmothers with their grandchildren.

The protesters, who were of all ages and appeared to be racially diverse, wore masks and held up signs such as “Black Lives Matter.” In addition to chanting Floyd’s name, they also chanted, “no justice, no peace” and “take your knee off my neck.”

In Babylon Town, there was a protest caravan of vehicles honking horns and adorned with signs and graffitied windows calling for justice for Floyd and an end to police brutality.

The march on wheels, designed to help maintain social distancing, made its way from a shopping center to Babylon Town Hall in Lindenhurst where vehicles looped around the building several times before heading to Suffolk County police's First Precinct in West Babylon.

On the lawn in front of Town Hall, dozens of protesters gathered with their own signs as motorists on Sunrise Highway honked their horns in support. Drivers and passengers in the caravan held up fists in solidarity and waved signs stating "Black Lives Matter" and "Being Black is not a crime" while the assembled protesters chanted the call and response "What do we want? Justice! When do we want it? Now!”

Holding a sign that stated "George Floyd matters," Chanique Hardie, 33, of West Islip said she came out because she's worried for her five-year-old son, Cameron, who stood nearby with his own sign asking if when he grows up to be a "6'9" strong black man, Am I a threat?"

"He shouldn't have to worry about walking out of our home and being stereotyped," Hardie said. "We're not our color, we're our souls."

Ada Jefferson, 40, of Amityville, said that when she announced on social media on Sunday that she would peacefully protest in front of town hall, she expected to be standing there alone.

"But it was bigger than me," she said. "Everyone, all races, are fighting for the same cause. It's an amazing thing." And, she said, the response has shown that "people are hurting" and "America needs to do better."

Jefferson applauded the police, who helped control traffic for the caravan, and local businesses who she said have been donating food and water to the protesters since they first started gathering at the spot on Sunday. She and others said they plan to return each day at 2 p.m.

"I've spent too much time sitting down, it's time to stand up," she said. "Together we rise. Apart, we'll fall."

In Port Jefferson Station, more than 200 people — mostly young and white — held signs declaring “Black Lives Matter,” and “No Justice No Peace.” Drivers in passing cars near the intersection of routes 347 and 112 honked their horns in support.

Insp. Patrick Reilly, commanding officer of the 6th Precinct, described the demonstration as peaceful. “It speaks to their passion, and we’re OK with that,” he said. “They have a right to be angry. Nobody was happy with the incident in Minneapolis.”

Jazmine Kendrick, 27, an African-American lawyer from Selden, said it pains her to have conversations with her 16-year-old brother, warning him to be careful in public.

“One of the things I tell him is, when you are out, you cannot act the same way as your white friends,” Kendrick said. “It brings tears to my eyes. … I just can’t have him grow up in a world like that.”