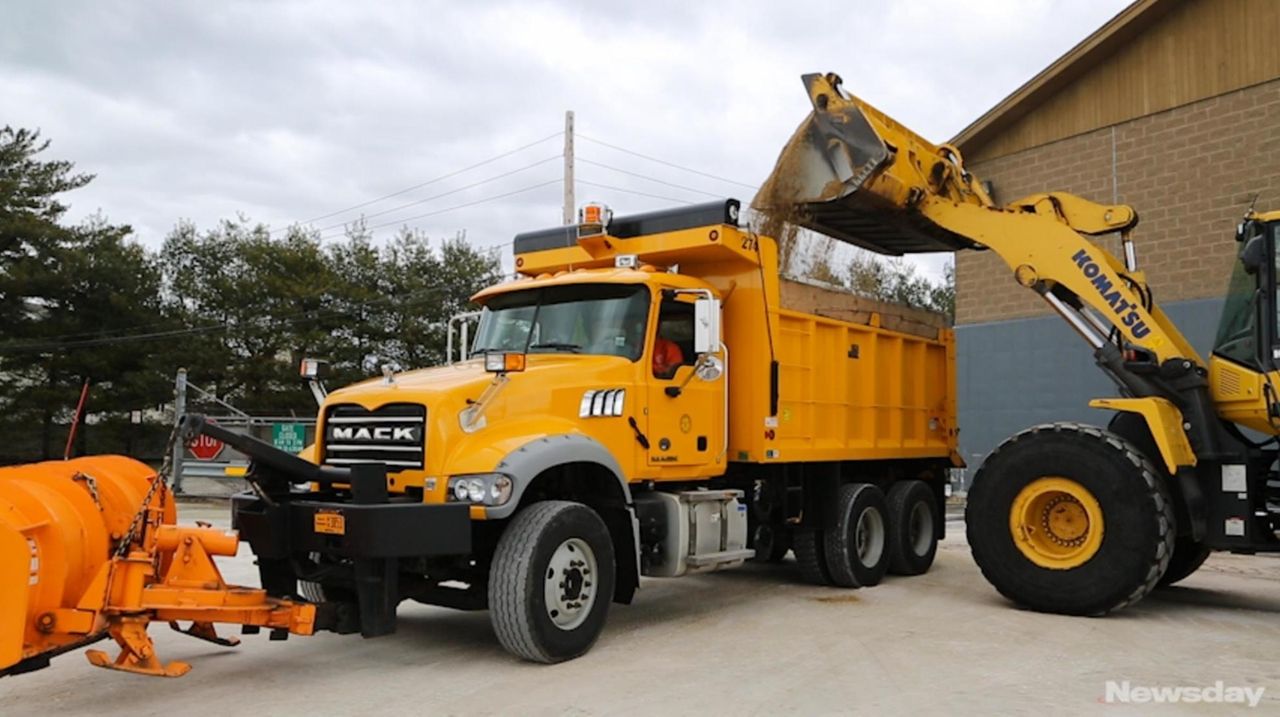 Huntington Supervisor Chad Lupinacci held a news conference on Monday, March 12, 2018, to discuss how the town plans to prepare for the coming nor'easter.  Credit: Barry Sloan

PSEG Long Island is making preparations for its third nor’easter in two weeks, seeking crews from around the snow-packed region to help in another restoration.

The company has seen more than 200,000 outages during storms during the past two weeks, and heavy snow and winds could lead to more.

On Monday, the company said it was making preparations for storm response and requesting additional workers.

“We are monitoring the forecast closely and our emergency preparedness plans are activated,” John O’Connell, vice president of transmission and distribution, said in a statement. “While snow and wind normally don’t pose a serious problem to the electric system, icing on lines and trees can increase the possibility of downed wires and power outages.”

Forecast: Nor’easter to bring 3 to 10 inches of snow

O’Connell noted the forecast conditions “may make it difficult for our crews to get around,” but added crews were “at the ready to begin restoring service, in the event of any outages, as safely and quickly as conditions allow.”

One challenge for PSEG is securing and making permanent the repairs that the utility made temporarily during the two previous storms, which caused service disruptions on the Long Island Rail Road after power lines fell on some tracks.

PSEG spokeswoman Brooke Houston said the utility is working on shoring up that work, and said all “priority repairs will be completed Monday.” She added that “minor repair work will continue to be worked this week as weather permits.”

On Tuesday, the LIRR will operate on a normal weekday schedule, according to Gov. Andrew M. Cuomo’s office. Platform waiting rooms will be kept open overnight Monday and all day Tuesday, through normal closing times Wednesday.

The railroad also was set to mobilize snow clearing crews as of 10 p.m. Monday to begin pre-salting of platforms and preparing for snow clearance activities throughout the storm.

Suffolk County Executive Steve Bellone cautioned residents to monitor storm forecasts and pay attention to its changing path. The storm was expected to dump more snow in Suffolk than Nassau.

“These storms, as we know, are tough to predict,” Bellone said in a news conference Monday. “People have a heads-up to monitor the news.”

The county planned to have more than 200 Department of Public Works vehicles on the roads after midnight and was prepared with more than 13,000 tons of salt.

Suffolk police will have additional communications staff working Tuesday to field calls and a Humvee at every precinct, Chief of Police Stuart Cameron said. “We are geared and ready to respond to the storm,” he added.

And the state Department of Transportation is prepared to provide additional plows and staff from upstate regions, as well as 27,000 tons of salt, as needed on Long Island, state DOT regional director Joseph Brown said at the news conference.

Brown said more than 300 plows would be positioned across Suffolk County, particularly on the Long Island Expressway and its exit ramps.

Town highway and public works departments also were preparing for the storm, again prepping trucks and plows to be out on town roads and checking salt or sand supplies.

The State Emergency Operations Center remained activated for enhanced monitoring and will increase operations to include all transportation agencies for the upcoming storm, the governor’s office said.

Amtrak service will be suspended between Boston and New York City on Tuesday until at least 11 a.m. due to inclement weather, according to the railroad’s website. There will be modified service on Amtrak lines not operating between New York City and Boston, including Acela Express Service and Northeast Regional Service.

Local forecast See snow totals in your areaHere are the latest available snow depth measurements for the tri-state area provided by the National Weather Service, Upton office. 8 tips to avoid hurting yourself while shoveling The cold and snow are not just an inevitable inconvenience of winter, but pose the ... Winter driving tips for skidding, getting strandedDriving on snow- and ice-laden roads can be tricky even for experienced drivers. Follow these ...