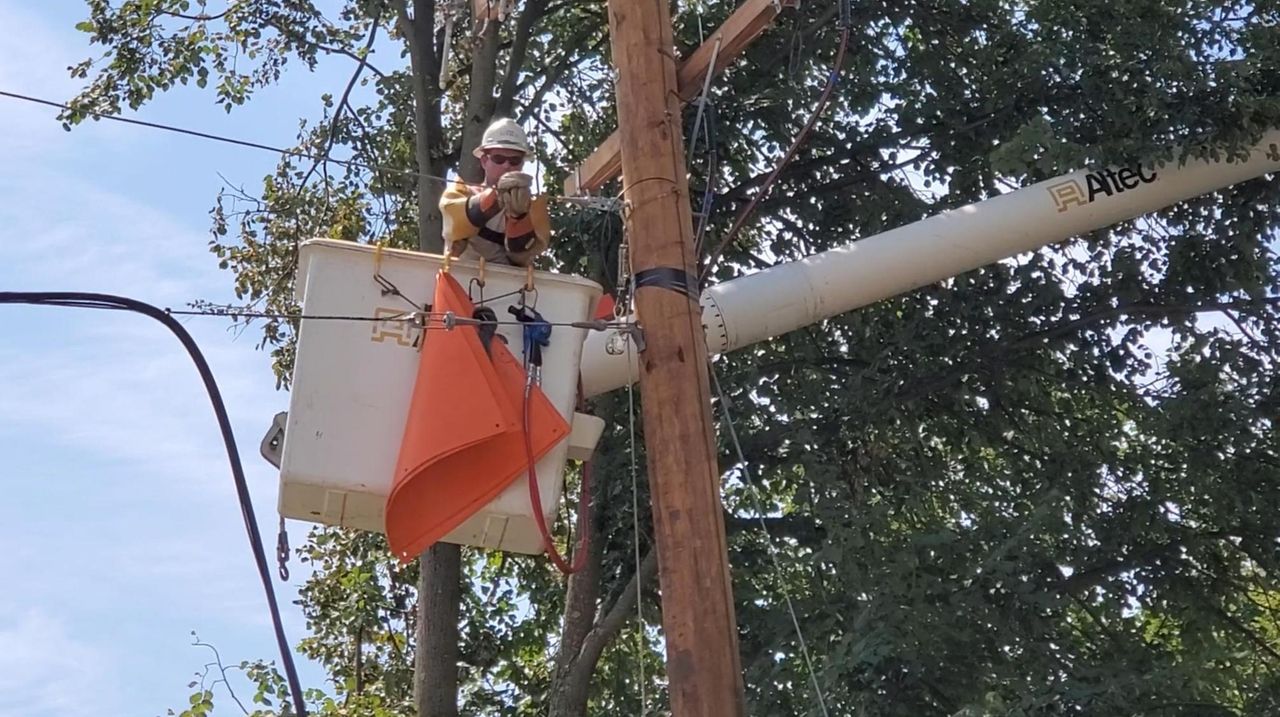 PSEG Long Island on Monday said it would reimburse customers who had an outage of 72 hours or more for some food and medicine losses due to Tropical Storm Isaias.

The new policy will reimburse residential customers up to $250 for spoiled food while commercial customers such as restaurants can receive as much as $5,000, PSEG said.

Medicine lost will be reimbursed up to $300, PSEG said.

Reimbursements will come from the utility's incentive compensation pool, which amounts to just over $9 million a year, said PSEG spokeswoman Ashley Chauvin.

Also Monday, PSEG Long Island president and chief operating officer Dan Eichhorn called the company’s “frustrating” performance in response to Isaias “an anomaly,” and pinned a giant part of the problem on a computer system designed to tally and manage outages.

Eichhorn spoke during a hearing of the Nassau Legislature about the utility company's response to the Aug. 4 storm, which caused extensive damage across Long Island and left about 420,000 customers without power. It took PSEG almost two weeks to restore power to all customers.

Customers who lost medicine in the storm will also have to provide an itemized list and proof of loss, including a pharmacy prescription label or receipt.

Claims for reimbursement can be filed at www.psegliny.com/claims with a Sept 16 deadline. It could take up to 60 days to process the claims.

State Sen. Todd Kaminsky (D-Long Beach), who, along with Nassau County Executive Laura Curran and other local leaders called for the reimbursement policy, said it was “the least [PSEG] can do.”

“While the policy should be inclusive of more customers and more generous, this was a just result and a rare victory for the average taxpayer against a powerful utility — but our efforts must not stop there,” Kaminsky said in a statement.

The Senate will hold a hearing Aug. 20 on PSEG's storm performance.

PSEG and LIPA as a general policy don’t reimburse customers for weather-related losses, according to terms in the LIPA rule book, but neighboring utility Con Ed announced earlier this month that it would, for upward of $540 in residential customer losses.

“Given the unique combination of circumstances, we believe the right thing to do is to expand our claims process to ease the burden on the customers most impacted by Tropical Storm Isaias,” Eichhorn said in a statement.

PSEG has taken withering criticism for its response to the storm, including customers’ inability to get through on telephone, online, text and mobile app communications, and the failure of the company to estimate customer restoration times.

Eichhorn said during the Nassau hearing that the company and its employees were equally frustrated by those problems and PSEG was doing a “deep dive” to find the root causes of the problem and deal with them.

One of the big problems, he told legislators, was PSEG’s outage-management computer system. PSEG advocated for and installed the $30.6 million system in 2014 — the year it took over management of the grid. PSEG, rather than LIPA, owns the system, which made it ineligible for a $50 million state grant, Newsday reported. The company at the time said the system allowed the utility to “more quickly and accurately” identify outage locations and provide “better estimated restoration times,” Newsday reported in 2014. Eichhorn acknowledged Monday that the system failed during Isaias.

“We clearly know that one of the key contributors was the failure of our outage management system to perform as designed at the beginning of the storm,” Eichhorn told legislators in opening remarks.

He said the failure led the company to resort to “manual processes” aimed at managing outages generated through the system that had not been identified the prior day. It also required the company to weed out “duplicative” work.

In the days after the storm, customers told of almost daily changes in restoration times reported by PSEG, if they could get them at all. Some customers waited for restoration “appointments,” akin to a scheduled dental visit, only to be disappointed.

Nassau legislators at the hearing expressed particular concern that Isaias, while bearing strong winds of up to 78 mph, could have been much worse.

“This was not the big storm we were afraid of getting and the reaction to it was much more difficult than we would expect,” said Legis. Delia DeRiggi-Whitton (D-Glen Cove). “We could have it in the next couple of weeks … there could be much worse coming, and we just feel the reaction to this was extremely poor. … It’s not only that we expected more, but we’ve been told to expect more. This was not a hurricane.”

Eichhorn said the company knows that bad weather is the new normal.

“We realize that extreme weather as evidenced by Tropical Storm Isaias is becoming more prevalent and more unpredictable,” he said. “We also fully appreciate that customers expect better communications and overall responsiveness. … We are working diligently to be prepared for the next major weather event, and ensure that PSEG Long Island’s response to this storm was an anomaly.”

Eichhorn also noted the damage was considerably larger than expected, with more at locations than the utility has had in past storms. That increased work threw off the company’s internal models for restoration times, he added.

“Our past models really did not work,” he said, adding that they will be updated.

LIPA is expected to apply to the Federal Emergency Management Agency for reimbursement of all restoration costs for the storm, expected to be in the hundreds of millions of dollars.

Legis. Denise Ford (D-Long Beach), who caucuses with Republicans and chaired the meeting, asked Eichhorn if underground power lines could be a way around PSEG’s woes. Eichhorn said the prospect of burying the lines would be “extremely expensive” and take decades to finish. But if “customers really wanted it," he said, "that’s something we would look at."

Meanwhile, a budding podcaster from West Sayville who said Monday morning she’s been kept offline because of a Verizon FiOS service outage of nearly two weeks, is beginning to worry about her ratings.

But Louise Muniz, who lost service when Isaias hit, isn’t just any podcaster. Muniz, 90, is the voice behind Italia Mia, a once-popular 13-year talk radio program that she recently converted to a podcast, using her former stage name: Luisa Potenza.

“It went out the day of the storm,” she said of her electricity.

Regarding her budding career as a podcaster, Muniz said: “It’s very popular. I haven’t been able to do it ever since. It’s horrible. I feel like I’m in a wasteland.”

Her efforts to reach Verizon have been futile, she said. “I’ve been on the phone for hours, on hold with automation. Talk about frustration ….”

Lack of FiOS service means not only the loss of access to her podcast audience but also no TV or telephone service, so listeners have no idea why her show went dark.

“Nobody can reach me!” Muniz said in a phone interview. “People don’t know my cellphone number.”

Jason Katz, 53, another Verizon customer, lost internet and cable service when Isais swept through his Plainview neighborhood. Verizon may not be able to restore access until Sept. 4, according to his exchange with the provider.

“They’re very good at apologizing. They train their people well,” said Katz, an attorney, adding that he has struggled to get answers from Verizon. “Can you imagine not having internet for two weeks or even a month?”

Katz said he and his wife can no longer work remotely. His son, a college student, has been going to his aunt’s house to use her internet and prepare for a graduate level exam.

PSEG restored power to Katz’s home on Aug. 11. That day, he said he was on hold with Verizon for five hours, before giving up. Katz said he remained on hold for two hours the next day, but has since opted to communicate with Verizon through a chat tool.

“Imagine the elation of having your lights and air conditioning finally come on, but no TV and no Internet — we went from 1850 to like 1980,” said Katz. “It’s just incredibly frustrating.”

Verizon spokesman David Weissmann did not respond to questions about how many Long Island customers lack service, and wrote in an email that the network is operating at prestorm levels.

“Generally as power has returned to areas Fios followed soon after," he said. "We are working through open issues for individual customers."

Huntington resident Robert Knutson, 68, said he has largely been unable to work since Isais struck and knocked out his Optimum service.

“I’ve been at St. Francis Hospital four times in the last year, regrettably. I have major heart problems. So I really do need to work to make a living to pay medical bills,” said Knutson, a former Merryl Lynch banker who now runs a financial services company. “I know I’m not alone.”

Knutson said his power was restored a week ago, but connecting with Optimum has been difficult.

In the past three days, Knutson said, he has called Optimum three times and was able to connect to a person once. The individual took down his number, but nobody has called him back, he said.

Lisa Anselmo, a spokeswoman for Optimum’s owner Altice, said Optimum would proactively credit customers who did not have service once power was restored.

“Overall, the remaining storm related issues are impacting individual or small numbers of customers and require service visits to repair network or plant issues serving individual locations,” Anselmo wrote in an email. “We thank our customers for their patience as we work to get everyone back online.”

Who qualifies for reimbursement

PSEG LI says it's ready for the next stormThe utility's president said Friday the company has wrapped up much of its work restoring the damage caused by Tropical Storm Isaias. But the repairs happened amid a tidal wave of criticism over response times. Curran, lawmakers call on PSEG to reimburse for foodThe Nassau County executive and six Long Island state senators want the utility company to reimburse residents for perishable food and medication lost from going nearly a week without power.