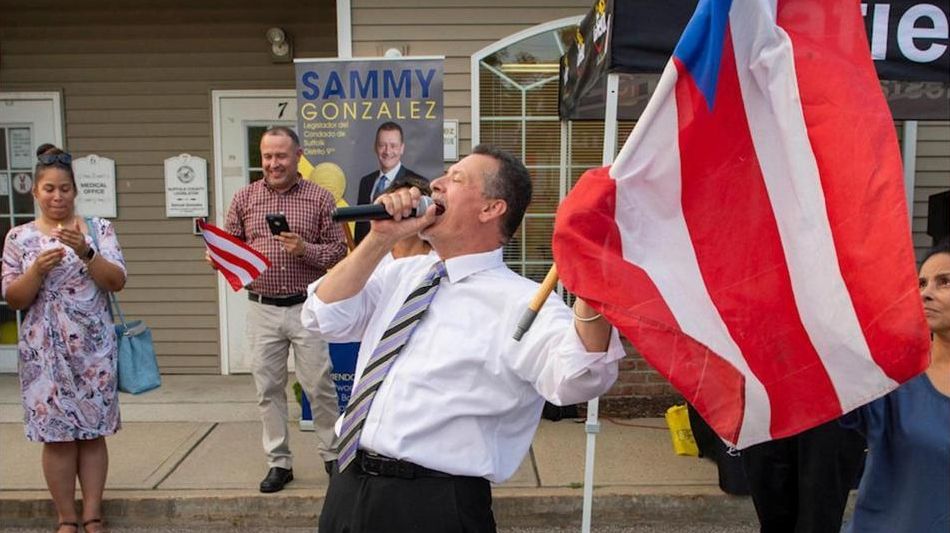 Dozens of Brentwood-area residents on Monday lit candles, prayed and danced to Latin dance music at a vigil for Puerto Rico as the island weathers a political firestorm — the resignation of its embattled governor — two years after a devastating hurricane. Credit: Howard Simmons

Dozens of Brentwood-area residents lit candles, prayed and danced to Latin music Monday evening in a vigil for Puerto Rico as the island weathers a political firestorm — the resignation of its embattled governor — two years after a devastating hurricane.

“We are here today together so that the people of Puerto Rico know that we support them in Brentwood,” said Legis. Samuel Gonzalez (D-Brentwood), as several of the 40 people outside of his office on Second Avenue in Brentwood waved the red, white and blue flags of Puerto Rico. “This little area of Brentwood is with them in solidarity.”

The vigil came in the wake of the announcement last week that Gov. Ricardo Rosselló would step down on Friday, the culmination of a wave of demonstrations against him and his administration for his approach to the recovery effort after Hurricane Maria, the Category 5 storm that struck the island in September 2017. In recent weeks, Rosselló was the target of a groundswell of opposition since investigative journalists reported text communications between him and his cronies revealed a callous attitude toward the suffering population, and widespread corruption.

He resigned after what analysts have said were among the largest demonstrations in the island’s history.

At the vigil in Brentwood, attendees saluted the communal work that brought the governor down as they celebrated their own collective efforts to support their relatives still reeling from the effects of Maria.

“Puerto Rico was able to organize and get him out of office,” said Elmer Flores, LGBTQ services coordinator for Pride for Youth, which was among several community organizations supporting the event. “We’re starting to see people are getting tired of these things and they want change.”

“We’re happy that he’s out,” said Gonzalez, who helped collect and deliver planeloads of foods, medicine and supplies to Puerto Rico after Maria along with Amee Hernandez-Waites, a 27-year veteran U.S. Army staff sergeant who handled logistics for the shipments. “Now the next fight is who’s going to go there?”

“What we’re hoping is that someone independent, someone that’s neutral from the politics of today of everyone who’s holding positions there now is picked,” he said.