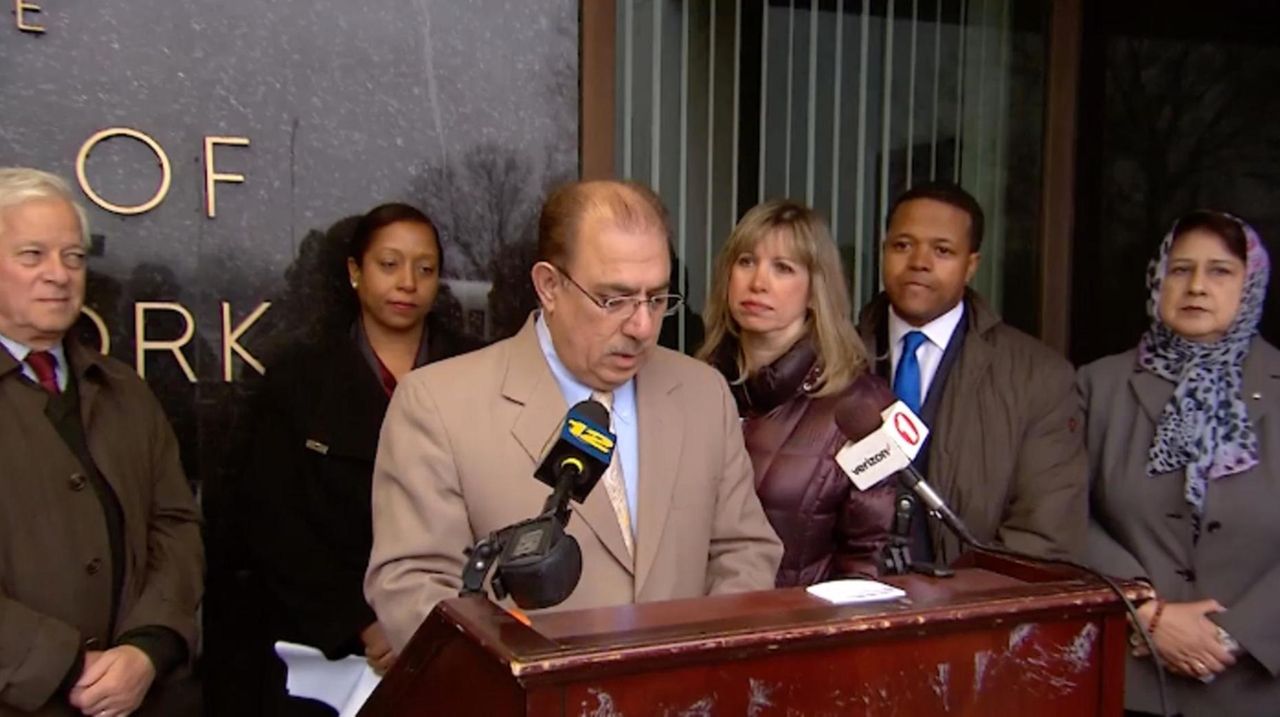 Muslim, Christian and Jewish leaders proposed a "Greet a Muslim Day" for Friday, April 6, 2018, during a news conference outside the state Supreme Court in Mineola on Tuesday, which a global online hate campaign targeted as "Punish a Muslim Day." Credit: News 12 Long Island

Nassau religious and political leaders — aiming to counter a global online campaign that targeted Tuesday as “Punish a Muslim Day” — have proposed a campaign of their own for Friday: “Greet a Muslim Day.”

Muslims, Christians and Jews gathered for a news conference outside the state Supreme Court in Mineola on Tuesday to discuss their proposal and also promote the breach of religious walls as a path to respect and understanding.

“We would send to the world the message of peace, love and harmony,” said Malik Nadeem Abid, the New York president of the California-based American Muslim Voice Foundation.

Exchange friendly salutations on Friday with co-workers or neighbors, he urged.

In a statement, the Suffolk County Police Department said there were “no incidents today” linked to the social media campaign.

“We made our officers aware of this issue, however there was not a specific threat to Suffolk County,” the statement said.

Nassau County officials said in a statement: “Although this threat appears to be less prevalent in the United States, the Police Department Intelligence Division is working closely with federal, state and local partners to monitor the situation.”

An NYPD spokesman reported no criminal incidents attributed to the leaflets.

In a statement, the NYPD said officers had been working with Muslim leaders since learning of the leaflets.

“While we have not seen any evidence of this threat gaining traction here, it has generated understandable concern,” the NYPD stated.

Fatima Azam, 12, of Hempstead, offered a child’s perspective on intolerance. Sometimes, she said, just the sight of her head covering seems to set people off.

“I kind of hate it when I walk by and people give me stares,” Fatima said at the news conference. “It doesn’t feel right. I just hate it.”

The preteen continued: “I don’t care about anybody’s skin or anything. I just care about who they are.”

Her mother, Uzmah Saghir, who emigrated from the United Kingdom, said some of her overseas friends were afraid to leave their homes.

In Nassau, she was concerned about letting her children go outside without her.

“We live in a global village now,” Saghir said. “We are just one click away. That’s my fear.”

“This is a very fearful day,” he said. “All religions are religions of God. We should open our eyes. This kind of terrorism is not acceptable.”

“Everyone should be outraged by this,” said Mindy Perlmutter, executive director of the Jewish Community Relations Council — Long Island.

She and other religious leaders, noting April’s Easter and Passover observances, called for uniting against all divisive forces, including racism and anti-LGBTQ efforts.

“We will not allow our community to be divided by hatred,” said the Rev. Emmanuel Asse, a pastor at Valley Stream’s Gateway Christian Center.

Assemb. Charles Lavine (D-Glen Cove) said, “We are here to fight for what is right.”

Dr. Isma Chaudhry, president of the Islamic Center of Long Island, said she was “heartened” by the support for her center and other Muslims.

She defied the culture of fear the threats aimed to create — by wearing a head covering, though she normally does not.

“I believe in the goodness of humanity,” Chaudhry said.