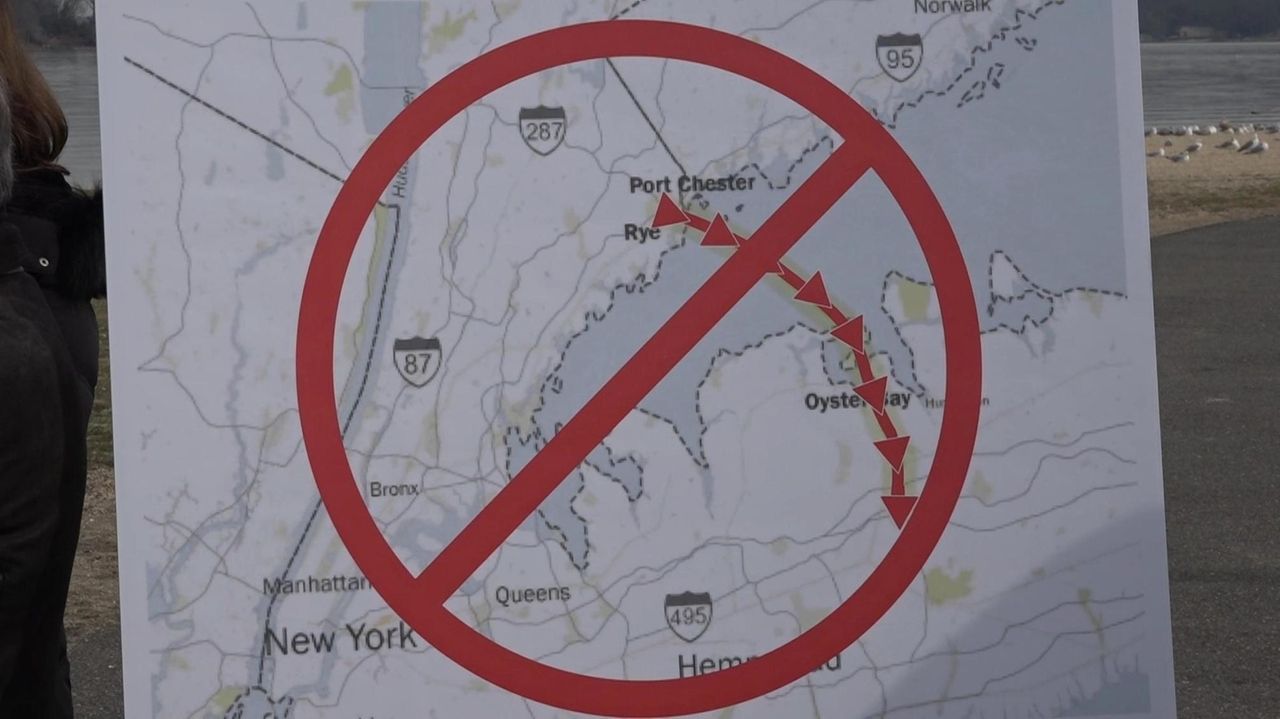 On Thursday, March 1, 2018, Sen. Carl Marcellino, along with local officials, community activists and environmental groups, held a rally in Oyster Bay in opposition of a tunnel or bridge/tunnel combination from Syosset to Rye. Credit: Howard Schnapp

About a dozen elected officials, along with environmentalists and commercial fishermen, assailed the plan at a news conference in Oyster Bay in language that at times bordered on the apocalyptic.

State Department of Transportation spokesman Joseph Morrissey said in an email that the agency “continues to explore opportunities to reduce congestion and enhance the competitiveness of Long Island. This is the beginning of a longer conversation on how to best proceed.”

DOT is committed to “extensive outreach” with affected communities, local officials and stakeholders, he added.

The governor proposed studying the feasibility of a new link between Long Island and the mainland in 2016, resurrecting a plan periodically circulated among regional planners, government officials and property developers since at least 1938, when a U.S. Senate committee suggested an 18-mile bridge from Orient Point across Plum, Gull and Fishers islands and on to either Groton, Connecticut, or Watch Hill, Rhode Island.

The most recent incarnations, outlined in an 87-page study the state released in January, included links to Westchester or Connecticut from Oyster Bay Town in Nassau County, or to Connecticut from Kings Park in Suffolk County.

The subsequent announcement from Cuomo’s office did not mention a potential link to Connecticut. A DOT spokesman said in January that a Westchester link appeared to be most feasible, though he cautioned that “we are still in the early stages” of planning.

A Sound tunnel would cost $31.5 billion to $55.4 billion, depending on location and whether there are one or two tubes, the study found.

The study’s authors estimated between 74,300 and 86,400 vehicles would use a tunnel to Westchester per day. Together, drivers would pay more than $500 million in tolls per year, if the fee were $20 to $25 per trip.

State funding for the project is not certain. State Sen. Carl Marcellino (R-Syosset) said Thursday the project would be a “$55 billion boondoggle.” In addition to Marcellino, State Senate Majority Leader John J. Flanagan (R-East Northport), the state’s top Republican, has said he opposes it.

Few Long Island leaders appear ready to welcome a tunnel or bridge into their own communities, though not all have rejected the idea of a Long Island link. Joseph Saladino, Oyster Bay Town supervisor, said in early January that the only viable option for a Sound crossing was in Kings Park. Assemb. Michael Fitzpatrick (R-St. James) returned the favor a few days later, telling a Newsday reporter that “I would love to see a bridge or tunnel on the Seaford-Oyster Bay Expressway, where it belongs.”

Along with elected officials, Thursday’s news conference at the Theodore Roosevelt Memorial Park boat launching ramps in Oyster Bay attracted a small crowd of environmentalists, baymen and at least one professional comedian.

Jackie Martling, a former writer for “The Howard Stern Show” who lives in Bayville, pledged to fight what he said was “nothing short of total destruction” of the community.