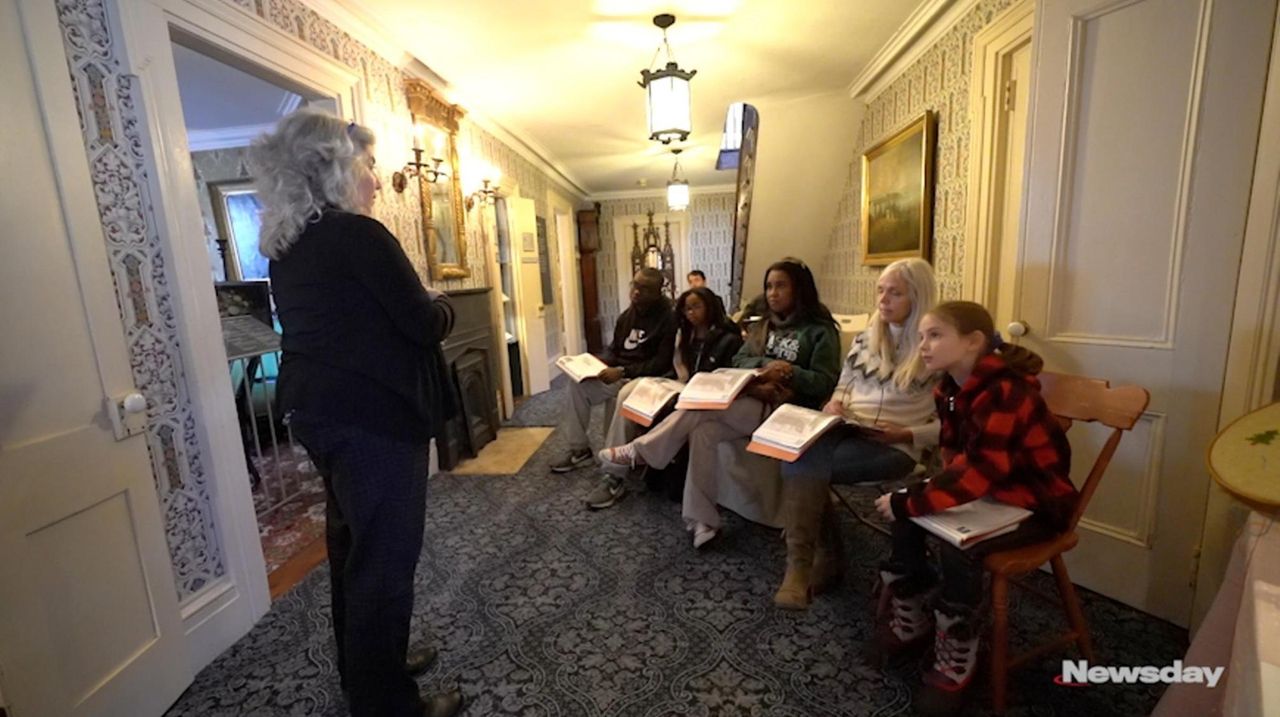 Claire Bellerjeau, director of education for Raynham Hall, on Jan. 20, spoke about the importance of learning the history of slavery in the Town of Oyster Bay and throughout Long Island. Credit: Randee Daddona; Jeff Bachner

On what is already a chilly January afternoon, the temperature inside Raynham Hall seems to have suddenly dropped a few degrees.

From another entry, this one in the account book of a local blacksmith, the students learn that in February 1755, the Town of Oyster Bay paid him 8 pounds to repair the irons — manacles that would have held a slave in place on the post to be lashed.

There is a brief silence when Bellerjeau reads these lines and presents images of the original documents.

He and junior classmate Peter Amendolara are taking the tour — which has been offered to Long Island schools and adults over the past year — as part of their required hours for the Rho Kappa Social Studies Honor Society. Both describe themselves as good students with an interest in history; both have grown up in Oyster Bay. Yet, admits George at the end of the 90-minute tour, "I knew slavery was here, but I didn't know it was like that."

"The tour was definitely a learning experience. It made me look at the history of my town in a very different way," agreed Peter.

The tour about slavery at Raynham Hall also represents a new twist in an evolving story. Originally a four-room saltbox, the house — now a not-for-profit town museum — is most famous for its Revolutionary War connections.

Back in the 19th and early 20th centuries, visitors came to hear titillating tales about the dashing British intelligence chief John Andre, who was known to have visited the house, and Col. John Graves Simcoe, commander of an elite unit of Loyalists known as the Queen's Rangers who made his headquarters here — and who, on Valentine's Day 1779, wrote a lengthy love letter to Sarah Townsend, daughter of Samuel Townsend, a prosperous merchant and an ardent supporter of American independence whose house had been commandeered by the British.

But in the 1930s, after the existence of George Washington's Long Island spy ring — centered around Samuel's son, Robert — was confirmed by historians, the narrative changed and the house with it. When the town purchased it from the Daughters of the American Revolution in the 1950s, the facade of the house (which had been remodeled into a Victorian manor in the 19th century) was restored to its original Revolutionary-era appearance.

The narrative told here became about the spy ring, which got a boost in recent years thanks to a number of popular books and the 2014-'17 AMC series "Turn: Washington's Spies," a dramatization of the network's exploits. Many people visit to learn more about Robert Townsend's clandestine activities.

But over the past year, Bellerjeau and her colleagues have been bringing other occupants of the house out of the shadows.

Based on documents she has been researching for the past 15 years, Bellerjeau — one of three full-time employees at the museum — now leads visitors through a tour that shows not only the role of African Americans in the lives of the Townsends, but the story of slavery on Long Island in a broader context.

"It's particularly important for us to learn about this," Bellerjeau says, "because New York had more slaves than any Northern city."

The tour, called "Standing Where They Stood," was sparked by a previously unknown Townsend family Bible that a New York City auction house obtained in 2005. "They called us and said, 'you might be interested in this,'" Bellerjeau recalled. "We said, 'we already have some family Bibles,' and they said, 'not like this one.'"

In the Bible was a list of 16 "coloured people" belonging to the family of Samuel Townsend.

"This was a revelation to us," Bellerjeau says.

The Bible, which Raynham Hall purchased for $10,000, launched her investigation. The new history unearthed by Bellerjeau, a longtime Oyster Bay resident who has worked at Raynham Hall since 2004, found that the existence of slaves on this site predates the house itself: The first record of a slave being set free on Long Island was in 1685 in Oyster Bay, when an African-American man named Tom Gall was freed upon the death of his owner, Alice Crabb. Crabb owned the property on which Raynham Hall (named after an English manor) would be built in 1738.

Tom Gall later married, prospered as a farmer (owning two plots of land, cattle and an orchard) and, suggesting the complexities of the time, purchased the freedom of his own son-in-law. His descendants lived in Oyster Bay until the 1950s.

The complicated relationships between whites and African Americans continued into the Revolution: Col. Simcoe was sympathetic toward the slaves who worked in the house that he used as his headquarters. Although depicted as a coldblooded killer in "Turn," the real Simcoe believed slavery was morally wrong (later, as the first governor of what is now the province of Ontario, he would abolish the institution). When his Rangers left Oyster Bay in the spring of 1779, the British commander allowed one of the Townsend's slaves, a young woman named Liss, to leave with them.

Meanwhile, at least some members of the extended Townsend family — most of whom were ardent proponents of liberty during the Revolution — turned out to have been heavily involved in the slave trade. The 19 African Americans enslaved by the Townsends (Bellerjeau's research uncovered three more beyond those listed in the family Bible), would have been domestic and field workers, providing much of the labor for Samuel and his son Robert's enterprises (the family farmed 350 acres of land in the area and owned five merchant vessels).

Letters and other documents found by Bellerjeau reveal the Townsend's conflicting attitudes toward slavery and the African American men and women who were part of their lives. Phebe Townsend, the youngest daughter in the family, made her own copy of a poem written in 1770 by Jupiter Hammon, America’s first published African American author (and a slave of the Lloyd family in nearby Lloyd Neck). The unpublished poem was discovered by Bellerjeau in 2015 in the archives of the New-York Historical Society. It represents one of the earliest known works by the poet.

After the Revolution, Robert Townsend, whose spy ring code name was “Culper Jr.,” became a founding member of the New York Manumission Society, an early abolitionist group. "He was strongly principled against slavery," Bellerjeau says, "Even though, or perhaps because, he grew up with it around him."

Bellerjeau presents much of this in her 90-minute tour. Visitors, like the two high school students, are shown facsimiles of documents and, encased in a glass display, the actual Townsend Slave Bible. They see period portraits, maps and illustrations (including a rendering of a whipping post of the era).

Those on the tour are invited to assume the identity of individuals who were enslaved in the house or in Oyster Bay. They are then guided to a cramped, second-floor storage room, which depicts what may have been the slaves' sleeping quarters.

At the end of the tour, visitors file into a first-floor parlor, where the names of enslaved individuals from Oyster Bay are written alongside the outlines of footprints. Visitors are invited to find the name of the person they represented and stand in their shoes, hence the name of the tour.

“I ask them also to write a reflection on what they’ve learned,” Bellerjeau says.

Because the comments are anonymous, one can only guess the ages and ethnicities of the reviewers. Their reflections, some related to the individuals they have been asked to portray during the tour, are a poignant, candid testament to the power of what Raynham Hall is depicting and their exposure to the reality of slavery on Long Island

“I feel bad for the slaves.”

“To me the fact that we survived slavery [and] became free Americans, is amazing and a point of pride to me.”

And one that likely expresses what many taking this tour, particularly those of color, might be thinking: “Slavery — I’m glad I was not born in that era.”

Denice Evans-Sheppard didn’t need to take a slavery tour to know that the odious institution existed on Long Island. She is descended, on both sides of her family, from people who were enslaved here. But Evans-Sheppard, executive director of the Oyster Bay Historical Society, is delighted by the work that has been done to bring the enslaved individuals of Raynham Hall — and by extension all the slaves on Long Island — out of the shadows.

“We have to be aware and acknowledge it so that we can all move on,” says Evans-Sheppard, who grew up in the Pine Hollow section of Oyster Bay next to the land originally owned by descendants of Tom Gall, a slave who was freed in 1685. “The facts are the facts. There was slavery here, probably more than most people realize.”

Raynham Hall’s Claire Bellerjeau points to modern research that shows New York had more slaves than any of the northern colonies. And they weren’t only in New York City. The first U.S. Census, in 1790, counted 381 enslaved and 302 free African Americans in the Town of Oyster Bay. By that time, the institution was already deeply rooted in what is now Nassau and Suffolk. A 1722 church census of Hempstead and Oyster Bay counted 947 white adults and 192 black and American Indian slaves.

The existence of enslaved people on Long Island was news to Jamie Arty, who lives in Mill Neck, but grew up in Odessa, Texas. “I was shocked and honestly couldn’t believe it,” Arty says. “You don’t really hear about slavery being in New York.”

Arty, who is African American, met her husband while she was a student at Hofstra. When they moved into their home on the North Shore in 2018, they learned that a Townsend cemetery was nearby. An interest in learning more about that family brought her to Raynham Hall, the Townsend's manor, where she has served since June on the house museum's board of trustees. “I’m so glad they’re doing this tour,” Arty says. “Especially since there are such misconceptions about slavery here.”

Archaeologist Chris Matthews knows full well the reality of slavery here. The former Hofstra professor, now at Montclair State in New Jersey, has conducted archaeological investigations in and around many former slave communities and estates in the North, including Setauket and Rock Hall in Lawrence.

"Slavery on Long Island is underacknowledged and misunderstood," he says. "Most people think it didn't exist or if it did, it was mild or short-lived." (Gradual abolition in New York State began in 1799; all slaves were freed by 1827.)

Matthews notes that most Long Island town histories tend to avoid the subject. "No one writing after the Civil War would say it was a good thing," he notes, "but there's almost an apologetic, 'look, it wasn't so bad here,' tone to it."

The existence of slave whipping post is painful evidence to the contrary. Although he has not taken the tour, Matthews commends Bellerjeau and Raynham Hall Museum for squarely addressing this uncomfortable topic. "They could have found that Bible and said, 'that's interesting, we'll mention if anyone asks.' Instead, they've now made it a central part of their narrative."

‘Standing Where They Stood’

In February, Claire Bellerjeau, director of education for Raynham Hall, will be presenting a program based on the museum's slavery tour, "Standing Where They Stood," at various locations around Long Island.