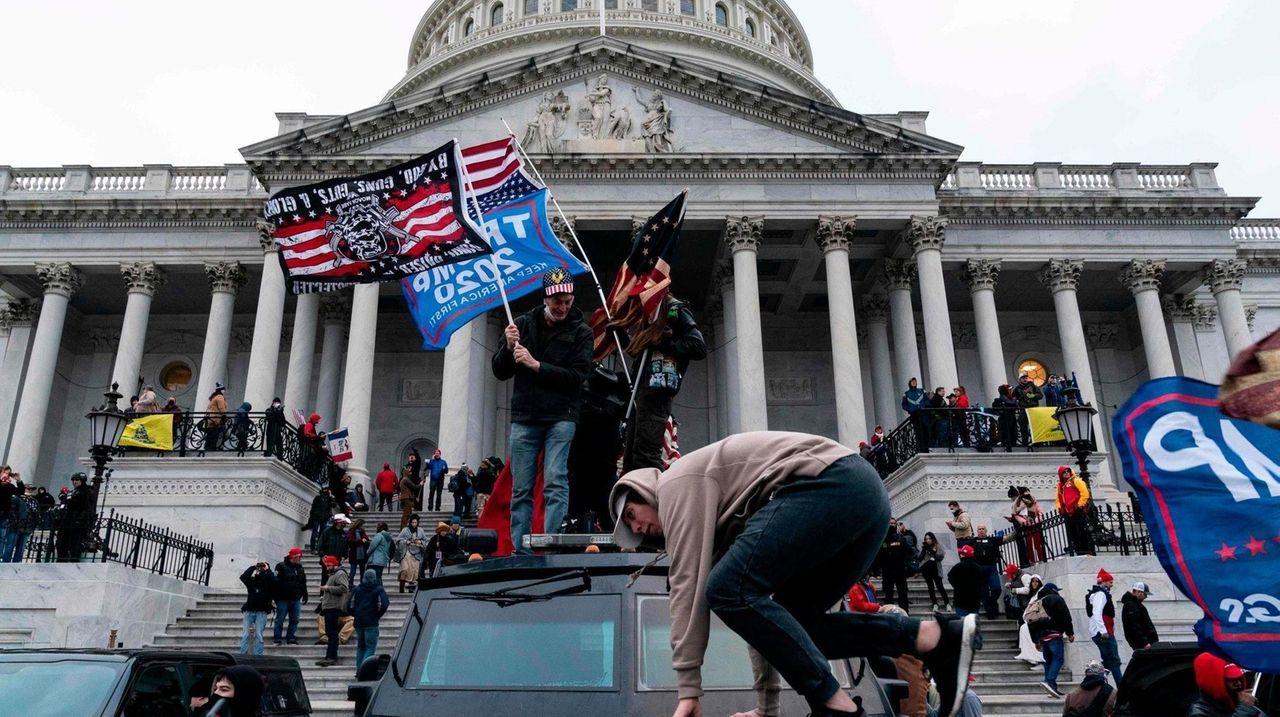 This story was reported by John Asbury, Denise M. Bonilla, Daysi Calavia-Robertson, Craig Schneider and Dandan Zou. It was written by Schneider.

Long Island civil rights leaders and Black Lives Matter activists blasted the police response to a mob breaking into the U.S. Capitol on Wednesday, asserting they saw a double standard compared to protests against police brutality that had a stronger police presence, tear gas, arrests and rubber bullets.

The Capitol came under siege Wednesday by supporters of President Donald Trump during a joint session of Congress, forcing elected officials to crouch underneath desks and don gas masks. Police tried unsuccessfully to hold off the crowd, which had been egged on by Trump during an earlier speech.

"The police presence was heavy. … You knew that they were there. You knew where you could go," said Hedgepeth, 37, of Freeport. "Just watching [TV on Wednesday], it seemed like … there was nothing that was off limits."

Bruce Hall, who was at the same civil rights protest, said he watched his TV in disbelief on Wednesday.

"The government was prepared for us when we came down in August," Hall recalled. "We couldn’t even get close to the Capitol building."

Elaine Gross, president of ERASE Racism in Syosset, said she was angry after Trump had authorities forcefully clear a peaceful crowd in Washington during the George Floyd protests in June — using tear gas and other riot control tactics — so he could have a photo taken of himself holding a Bible outside a church there.

"People had been milling around, and suddenly they were pushed and knocked to the ground," Gross said. "People were violently dispersed for no reason."

She said she was particularly disgusted after seeing police manhandle people during other protests. "This kid gloves handling of the situation is totally irresponsible, inexplicable and people have to be held accountable," Gross said.

Sharod "Jay Vegas" White, 38, a Freeport resident who has participated in several Black Lives Matter protests in Washington, said the images of rioters storming the Capitol stood in stark contrast with the "peaceful and respectful" demonstrations he attended there this past summer.

White was particularly appalled at the site of someone who appeared to be a police officer taking selfies with people who were trespassing and vandalizing.

"Instead of arresting them? In our nation's capital? It's egregious," White said.

Tracey Edwards, Long Island regional director for the NAACP, said that while she believes the police treatment of Black Lives Matter protesters has been different from that of the group that charged into the Capitol, a comparison is not appropriate.

"What went on in Washington was domestic terrorism where they tried to overthrow our government," she said. "Everyone has a right for peaceful protest. This was not protesting."

And, "For anyone to think that if these individuals were people of color, that this would have been the same result, they are kidding themselves," she added.

Edwards said there needs to be an investigation of who obtained the permit to march to the Capitol and what was required, citing her own experience with marches and the need for planning with Homeland Security and all of the police departments in Washington.

"They need to uncover the truth and tell people the truth on what this was and who was part of it," she said. "They’re going to have to find out just how far up this went."

Edwards said she would like to see use of the executive order Trump issued in June in response to Black Lives Matter protests to charge those who vandalize federal monuments, an order that included up to 10 years in prison.

"Let’s see if they’re going to use it on the domestic terrorists," Edwards said.

The reaction follows months of protests last summer across the nation over the police killing of unarmed Black people such as Floyd in Minneapolis and Breonna Taylor in Louisville, Kentucky.

Erin Biener, 40, of Levittown is a team member with LI Peaceful Protest, an activism group that this past summer organized more than a dozen Black Lives Matter movement protests on Long Island.

"They could've dealt with [Wednesday's] domestic terrorists with the same force they use when dealing with us, with people protesting for equality for our Black citizens, but they just didn't," Biener said.

Biener said she suspects the differing responses comes down to race.

"Maybe [it's] because the majority of those in law enforcement and in the so-called 'justice system' identify more closely with 'White America,' with the agenda, morals and ideologies of these rioters," Biener said. "Or perhaps it's because they've been mentally trained to feel more threatened by those who are Black, Indigenous, or people of color."

Suffolk County saw about 300 civil rights protests and Trump rallies this past summer, none of which resulted in property damage or significant civil unrest, Police Commissioner Geraldine Hart said. Hart attributed the generally peaceful nature of the protests to the department's efforts to reach out to the leaders of the groups, making sure both sides understood each other's expectations.

"A lot for us is our relationship with the community," Hart said. "At the end of the day, we want to provide a safe space for people to exercise their First Amendment rights."

Nassau, for the most part, also has experienced mostly peaceful protests.

"Since June of 2020, we have policed approximately 160 protests with over 40,000 protesters with no violence and a minimal amount of arrests," Police Commissioner Patrick Ryder said in a statement. "From the start of the demonstrations, the Nassau County Police engaged individuals in conversation to ensure that protesters were aware that we were going to protect everyone’s First Amendments rights as long as the protests were peaceful."

Biden calls Capitol security 'totally unacceptable'Biden, civil rights groups said Black Lives Matter protesters have been treated more harshly. Education Secretary DeVos resigns after riot, see who else has resignedIn a resignation letter Thursday, DeVos blamed President Donald Trump for inflaming tensions in the violent assault on the seat of the nation's democracy. In Capitol riot, educators see a teaching momentSchool district leaders across Long Island reached out to their teaching staff Wednesday night and early Thursday, encouraging them to discuss the historic events with students and providing them with resources and support. Editorial: There must be consequences for Capitol riotWe need to hold all those responsible to account.

Forecast: Slippery morning commute with early snow falling
Connetquot psychologist: District not enforcing mask mandate
1:35
Single mom of four gets her own home through Habitat for Humanity
More than $4B in state aid for LI schools in Hochul's budget plan
Sewell moves prompt hopes of new crime-fighting plan
Acting MTA chairman: Agency looking to put off fare hikes
Didn’t find what you were looking for?