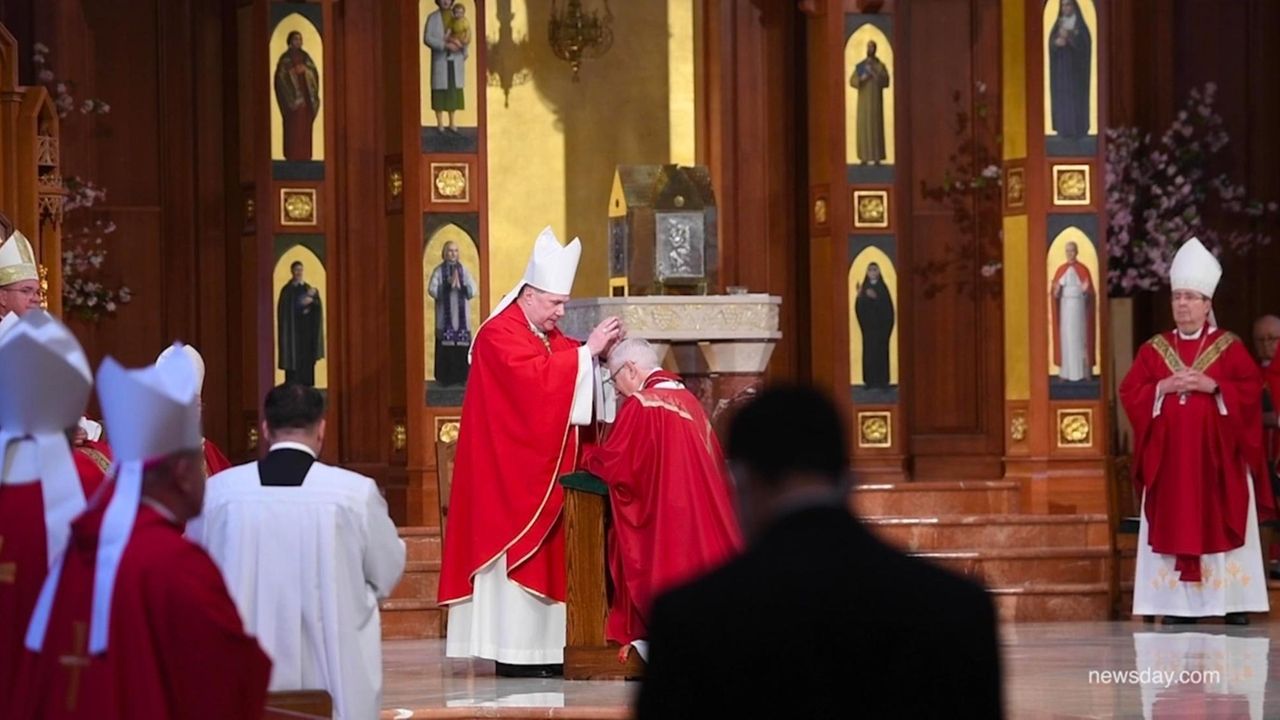 In a largely empty church, Luis Miguel Romero Fernandez was installed in one of the top posts in the Diocese of Rockville Centre on Monday.    Credit: Alejandra Villa Loarca

St. Agnes Cathedral normally is packed for the ordination of an auxiliary bishop, but on Monday it was largely empty as Luis Miguel Romero Fernandez was installed in one of the top posts in the Diocese of Rockville Centre.

The emigrant from Spain, who will help minister to Long Island’s growing Hispanic population, was supposed to be ordained in April, but that was put off because of the coronavirus pandemic.

While the cathedral was sparsely occupied to maintain social distancing and prevent potential spread of the virus, the televised Mass was still replete with the centuries-old traditions of the church on one of its more momentous occasions.

Romero, 66, was named to the post by Pope Francis in March. Francis’ representative in the United States, Archbishop Christophe Pierre, on Monday read the pope’s letter to the congregation announcing the appointment.

Bishop John Barres of the Diocese of Rockville Centre called Romero “a Renaissance man” and “a global churchman.” He has a doctorate in biology, has served as a missionary for 35 years, headed a university in Ecuador, and has given lectures on biology, philosophy of science, ethics, theology, distance education and university management.

Romero “has been an important global spokesman on the relationship between religion and science,” Barres told the congregation.

But more immediately, Romero is expected to play a critical role in outreach to Latinos, who make up at least 30% of Catholics on Long Island, according to church officials and community leaders.

As one of four auxiliary bishops in the diocese, the eighth-largest in the nation, Romero will assist Barres in his duties ministering to all Catholics, conducting confirmations, meeting with priests and other activities.

Cardinal Timothy Dolan, head of the Archdiocese of New York, noted to the congregation that Romero is a missionary, and Barres had made a good move in recommending to the pope that Romero become an auxiliary bishop.

“As Pope Francis tells us, as Peter and Paul tell us, as Jesus himself tells us: We’re all on mission. We are all missionaries,” Dolan said.

Romero thanked his family, noting that his siblings could not travel to the ordination because of the pandemic. In his native Huelva, Spain, stands a huge statue of Columbus, gazing across the sea to America, he said.

“It was one of the favorite places of my youth, and a true prophetic sign of what my whole life would become: embracing the cross, dreaming beyond the sea and arriving in America,” he said.

Romero is a member of the Idente Missionaries, a Catholic congregation founded in Spain in 1959. He is the first member of the group to be made a bishop, Barres said.

Romero arrived in 2014 to serve as pastor at Our Lady of Loretto, a heavily Central American parish in Hempstead, after then-Bishop William Murphy asked his order to come to Long Island to assist in ministering to Latinos.

He was well-prepared for the post. After he was ordained a priest in 1981, Romero spent 25 years in the South American nations of Bolivia, Chile and Ecuador. He served as both a parish priest and a university administrator and professor.

Romero then worked for two years in India, where the southern part of the country has a substantial number of Christians. From India he transferred to Hempstead.

Barres said Romero will probably play a key role in trying to increase the number of Latino students in local Catholic schools as the system undergoes a revitalization called the “Morning Star Initiative.”

“We have made significant progress in recent years but we have so far to go,” Barres said.