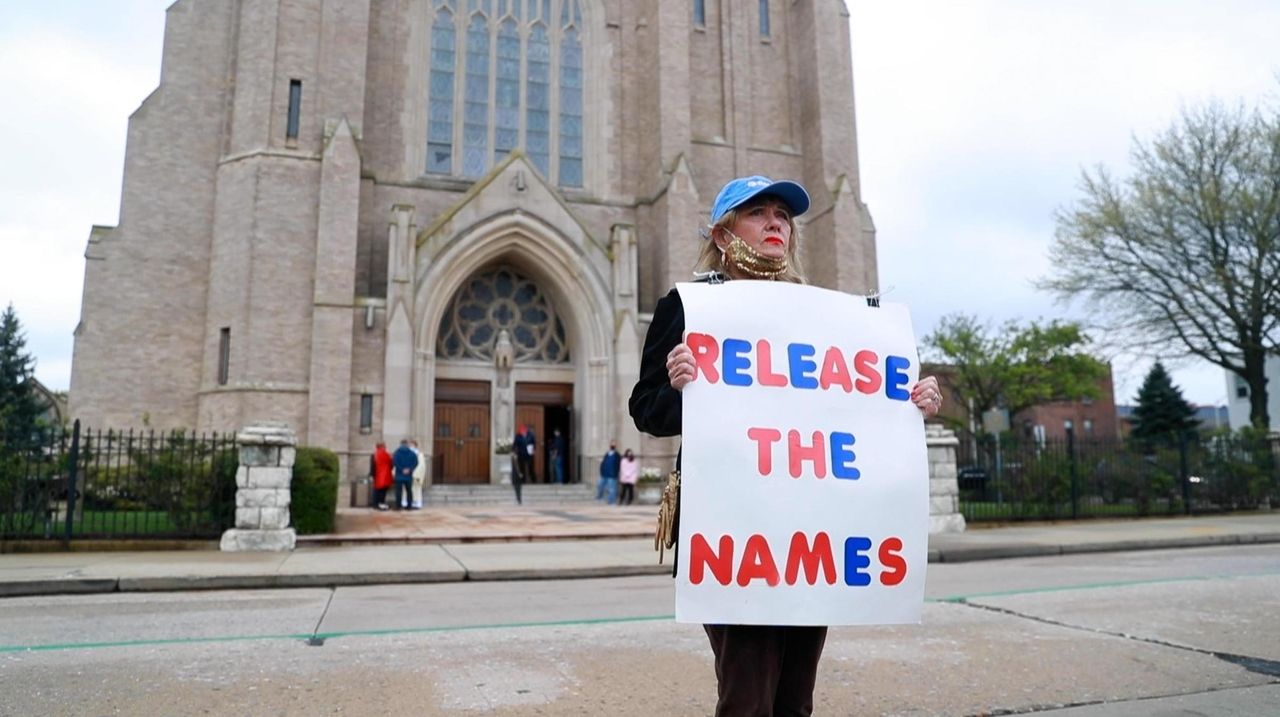 The Diocese of Rockville Centre recently released a list of 101 clergy members accused of sexual abuse. Critics allege many names have been omitted from that list and have called for the church to release more. Newsday's Steve Langford has the story. Credit: Newsday / Raychel Brightman

The late Bishop John McGann and Msgr. Alan Placa had been prominent figures in the Catholic Church on Long Island, which is grappling with a still-unraveling sexual abuse scandal.

But neither is on a list of 101 clergy members accused of sexual abuse of minors that the diocese recently released, even though related lawsuits have been filed against both, according to attorneys for alleged abuse victims. The attorneys called the omission of the two, who held powerful posts in the Diocese of Rockville Centre, an example of what they claim is a continuing cover-up of wrongdoing in the church.

"Clearly, the Diocese of Rockville Centre should have listed Bishop McGann as being accused of sexual abuse on multiple occasions if it really cared about safety, accountability, healing and transparency," said Mitchell Garabedian, a Boston-based lawyer who has filed three civil complaints on behalf of alleged sexual abuse victims of McGann.

"Clergy sexual abuse victims wonder what secret criteria the Diocese of Rockville Centre has used as an excuse to not list priests such as Bishop McGann," Garabedian said.

Sean Dolan, a spokesman for the diocese, on Sunday rejected Garabedian's statements.

"The suggestion that the Diocese has a ‘secret criteria’ for whose name is included on the list of clergy is flatly wrong," Dolan said.

"The Diocese did not determine which names went on the list," he said. "Instead, as all the lawyers involved know, it was the bankruptcy court that decided what names would be included. It is a matter of public record that the court determined the objective criteria for the list, and the Diocese was simply following the court order. The Diocese will continue that cooperation as we seek some measure of healing for survivors of abuse and maintain the highest standards for child protection."

Garabedian said the diocese "should not need court orders in order to practice morality," and called on the church to release all its secret files on pedophile priests.

At least two lawsuits have been filed against Placa under New York State’s Child Victims Act, which allows survivors to file civil suits regardless of when the alleged abuse occurred, said Jeff Anderson, a Minneapolis-based attorney.

The church released the list April 15 as part of filings in its bankruptcy proceedings. It includes the names of accused priests and deacons, the years and locations they served, and the places where the alleged abuse occurred.

McGann and Placa appear on a separate list compiled by a Creditors Committee mainly of survivors that names 46 accused clergy left off the diocesan list. They include clerics trained by the diocese or who were from religious orders and worked on Long Island. The group said that while it "has not independently investigated the allegations," sexual abuse lawsuits were filed against the men, or a religious order and/or a diocese outside Rockville Centre found the allegations to be credible.

Anderson, who has filed dozens of sex abuse lawsuits against the diocese, said the omission of both men was disturbing.

"What we have is a pattern of serious deception by concealment," he said.

The diocese said in 2019 that it had been made aware of the allegations, and forwarded them to the Nassau County District Attorney.

Placa served in posts, including vice chancellor in the diocese in charge of investigating priest sex-abuse complaints. He was identified by Newsday and victims as "Priest F" in a 2003 Suffolk County grand jury report on sexual abuse of minors by clergy in the diocese.

He also was found not guilty at a canonical trial of allegations lodged in June 2002. He had been suspended from serving as a priest for seven years while the trial progressed, and repeatedly denied the allegations.

Anderson said 34 of the names issued by the diocese — or about one-third of the list — were made public for the first time as alleged abusers. Anderson’s law firm has compiled its own list of 144 clerics in the diocese against whom lawsuits have been filed under the Child Victims Act.

Until this month, Rockville Centre had been the only diocese in the state that had been refusing to release such a list.

Dolan said the church is working to alert victims to an Aug.14 deadline for filing claims under the Child Victims Act.

He said the diocese had not published a list of credibly accused clerics "because of ongoing investigations, privacy issues, as well as potential legal considerations."

He added that "the inclusion of any name does not represent an admission of guilt on the part of the accused."

Those listed were either determined by a diocesan review board to have credible accusations against them, or had a settlement payment issued by the diocese to a survivor through a Debtor’s Independent Reconciliation and Compensation Program, Dolan said.